Williams stood above the best in the state 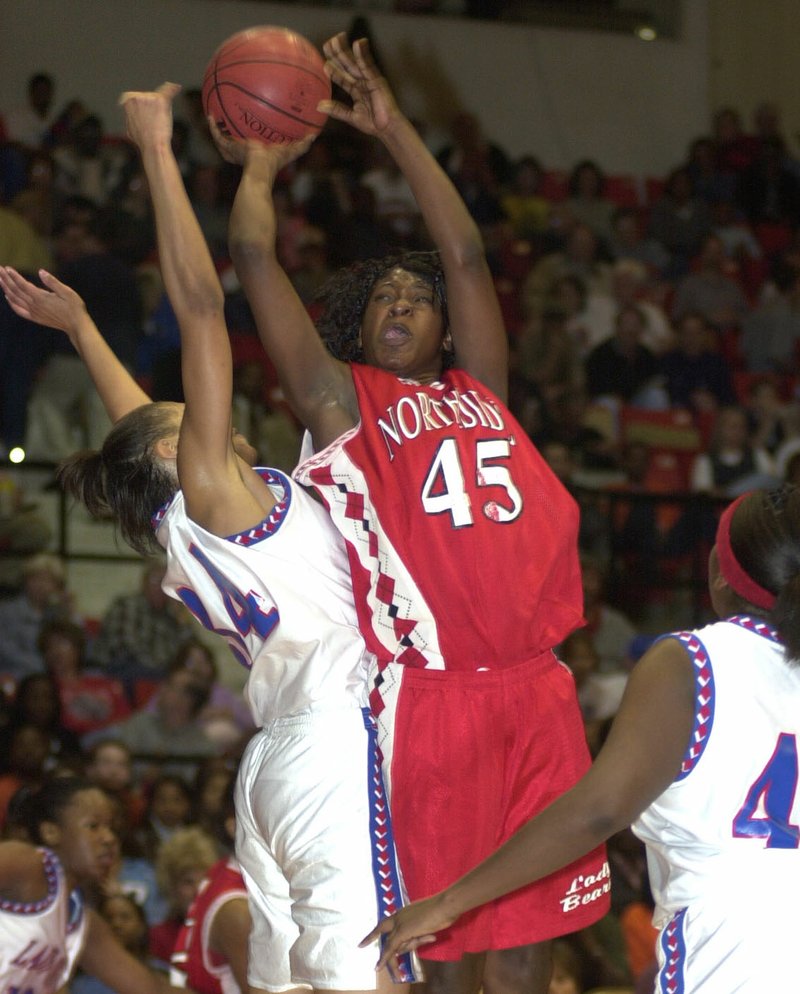 Tamika Kursh Williams, a 6-foot-1 All-American from Fort Smith Northside, was the best player on what some still argue as one of the best-ever high school girls' basketball teams in Arkansas prep sports history.

The Lady Bears finished the 2002 season with a 28-1 record, ranked third in several national polls and captured the school's fourth straight Class AAAAA state title with a 67-56 win over No. 2 West Memphis.

Williams would be named the Arkansas Democrat-Gazette Arkansas player of the year and would be named to the inaugural McDonald's girls' All-American team. That season, she averaged 18 points, 9.8 rebounds and 3.7 blocks per game.

In her final game as a Lady Bear, Williams scored 32 points and grabbed 12 rebounds to carry Northside over the Lady Blue Devils. She was named state tournament MVP for the second time for her performance.

"Tamika ended her career with an exclamation point because West Memphis had a great team that year," Northside coach Rickey Smith said. "No matter the score or situation, she always rose to the occasion to find a way to help our team win. Never once did she not meet the challenge.

"On the outside, you see a 6-1 athlete that was chiseled and could run the floor for 32 minutes. But the outside was not as near as precious as the inside. Her heart, motor and commitment separate her from other players. She could not have asked for a better high school career."

Williams said she got that competitive spirit as a child growing up in Fort Smith.

"Growing up in the projects, I was always on the basketball court, playing against the boys," Williams said. "The more I played, I discovered that I wanted to be a basketball player. All I wanted to do was compete. You got to have the passion and you got to have the work ethic if you want to be a champion. These are the things that coaches cannot teach you – you either have it or you don't."

During her time at Northside, six of the top 25 players in the 5-on-5 girls' basketball players played in this era – Kursh, Ozark's Sarah Pfeifer, Palestine-Wheatley's Erica Smith, Siloam Spring's India Lewis, Harrison's Danielle Allen and Shameka Christon of Hot Springs. Throw in Ruby Vaden from Osceola, who like Kursh was a McDonald's All-American in 2002 (both played in the initial McDonald's all-star game), and Smith said that 7-person squad could play with anyone in the nation.

"That is an SEC championship-caliber team right there," Smith said. "Every one of those players could play high school basketball today and still be great college players. These were elite players."

In 2002, Northside's lone loss that year came to consensus national champion Lynwood, Calif., 66-53 in a December holiday tournament in Wyoming. Kursh was hampered by a sprained ankle from a semifinal victory the night before over nationally ranked Oregon City, Ore.

"Both Chivis (Merriweather) and I hurt our ankles," Williams said. "If we were 100 percent healthy, we win that game because they barely beat us."

"Tamika's injury was one of the worst ankle injuries I've seen," Smith said. "Sometimes I wonder if that rolled ankle did not cost Northside a mythical national championship."

Though she did not show it, Smith said the ankle injury lingered during the AAAAA-West schedule in January and February.

"(She) played with that injury the rest of the season, but she never missed a practice or a game because of it," Smith said. "She was a warrior."

The Lady Bears did cruise to a 14-0 AAAAA-West record and a dominant run in the AAAAA State tournament, which was held for the first time at the new Stubblefield Center on the campus of UA-Fort Smith.

That would also be the first year that Northside and Southside played each other at the Stubblefield Center in the regular season. After losing the first meeting to the Lady Rebels as a sophomore, Williams helped lead the Lady Bears to 6 straight wins over the Lady Rebels, including an MVP performance in the 2001 AAAAA championship game.

"When we played Southside, the whole city seemed to come out to watch that game. You had to bring your 'A' game because Southside was going to play their best. It was a competitive and we looked forward to playing them. We treated them like we were playing a top team because there were good as well.

In the mid-1990s and early 2000s, Northside and Southside dominated the Class AAAAA girls' basketball landscape as the schools combined for six state titles in seven years.

"I think there was a time that people slept on Fort Smith girls' basketball," Williams said. "But we opened up their eyes that both schools could play girls basketball at a high level. When Northside and Southside played, it was packed for both the boys and girls."

Just weeks before he won his first state title at Northside in 1999, Smith already knew what would be coming up from his junior highs, starting with Williams and forward Redd Coleman in 2000.

The teams split during the season – Kimmons, led by Williams, won the regular season conference title while Coleman-led Darby won the regional title.

"I made sure I wore neutral colors and sat at midcourt," Smith said. "I was there to support both teams. People saw them beat all of the Northwest Arkansas teams and knew they were coming to Northside.

"I knew how good they could be when Abel Triplett was coaching those girls in elementary school," Smith said. "I began to follow them vacationing in Florida during their national tournaments. They won the YBOA national championship and Tamika had established herself as a player to watch."

Williams still keeps up with her former teammates as well as the current Northside squad.

CREDENTIALS Earned all-conference and all-state honors at Fort Smith Northside and helped lead the Lady Bears to three AAAAA-West conference titles (a 41-1 league record) and three Class AAAAA state titles (an overall record of 83-6) … Was a two-time Class AAAAA tournament MVP,,scoring 32 points and grabbed 12 rebound in the 2002 Class AAAAA championship game against West Memphis … was the Democrat-Gazette’s Arkansas girls’ player of the year on a team that finished 28-1 and finished 3rd nationally by USA Today. Williams and Osceola’s Ruby Vaden were the first Arkansas players to play in the inaugural girls McDonald All-Star Game in April 2002 … Played collegiately at Louisiana Tech … now a middle school coach and physical education instructor at DeWitt Clinton Middle School in Carrolton, TX … She is married to Ted Williams junior and has two children – Tayden (6) and Teagan (1).

THAT’S WHAT SHE SAID “I was always competitive. Growing up in the projects, I was always on the basketball court, playing against the boys. The more I played, I discovered that I wanted to be a basketball player. All I wanted to do was compete. You got to have the passion and you got to have the work ethic if you want to be a champion. These are the things that coaches cannot teach you – you either have it or you don’t.”