ASK THE VET: Cats drool, but sometimes drooling is a symptom 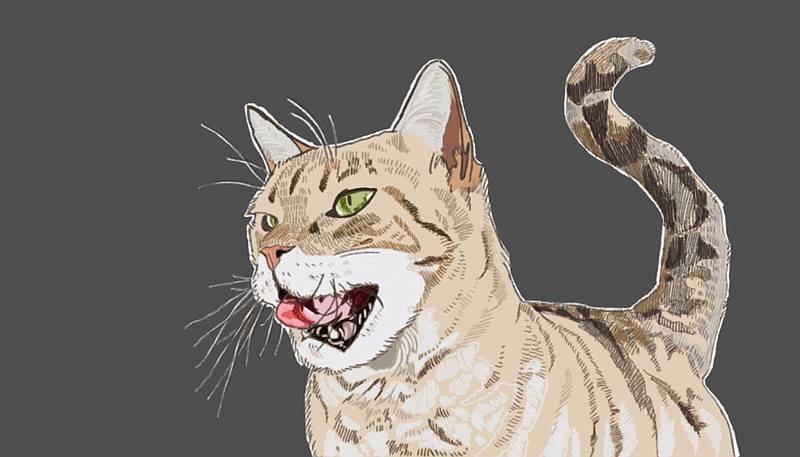 Q My cat Myrtle sometimes drools. Should I be concerned?

A It depends. Many cats drool while purring. I can't tell you the number of times I've stood up, after one of my cats lay purring on my lap while I pet her, to find my slacks soaked with cat saliva.

Conversely, some cats drool when they're stressed.

Treatment starts with removing the plant material and encouraging the cat to drink cool water. A cat that refuses to drink might be enticed by adding some liquid from a can of tuna. A little milk or yogurt could help, too, because calcium binds the oxalate crystals.

A common one is oral disease, such as gingivitis, an abscessed tooth or a cancerous mass on the gums or beneath the tongue. A "foreign body," such as a sliver of wood, might be stuck in the mouth.

Another cause of excessive drooling is gastrointestinal disease. Nausea, abdominal pain, liver disease and kidney failure are common sources of stomach upset and drooling.

Other times, a neurologic disorder is responsible. Cats with paralysis of the nerves that control the swallowing muscles drool, as do those that feel dizzy from vestibular disease.

Some drugs, including veterinary and human medications as well as illicit drugs, induce drooling in cats. I wondered why some cats drooled after I gave them a particular oral liquid antibiotic. I learned the answer early in my career when I dosed a cat and she immediately spat the medicine back at my open mouth: It's horribly bitter.

Finally, certain chemicals cause drooling, including some insecticides and household cleaners.

If Myrtle's drooling isn't associated with purring or chewing houseplants, have your veterinarian evaluate her.

Q Reacher, my "shorty" Jack Russell terrier, develops a rash on his belly this time each year. I assume it's from the grass, though I do wipe his belly off when he comes inside. Is there anything else I can do?

A Many breeds — including Jack Russell terriers, pit bulls, West Highland white terriers, Labrador retrievers and golden retrievers — are predisposed to a skin condition called atopic dermatitis. The disorder is set off by an allergy to environmental triggers such as grass, pollens, molds and dust mites.

A dog with atopic dermatitis is itchy, so he licks, chews or scratches. Sometimes, he has a rash. The paws, belly, groin, armpits, anus and/or ears are most often affected. Some dogs have recurrent ear infections.

Washing the grass and pollen off Reacher's belly helps, as does regular bathing. Oral administration of an antihistamine and the omega-3 fatty acids in fish oil can aid in treating atopic dermatitis. Flea control is also important.

But the most effective treatments are medications prescribed by your veterinarian. One is an anti-allergy tablet called Apoquel, given twice daily for the first two weeks and once daily thereafter.

Another effective option is Cytopoint, an injection administered every four to eight weeks by your veterinarian.

A final alternative is immunotherapy injections or oral drops formulated after allergy testing. Several months of therapy are required before the dog experiences relief.

Make an appointment to have your veterinarian examine Reacher, who will feel much better once his itchy rash is gone.