Most colleges plan to save funding restored by state 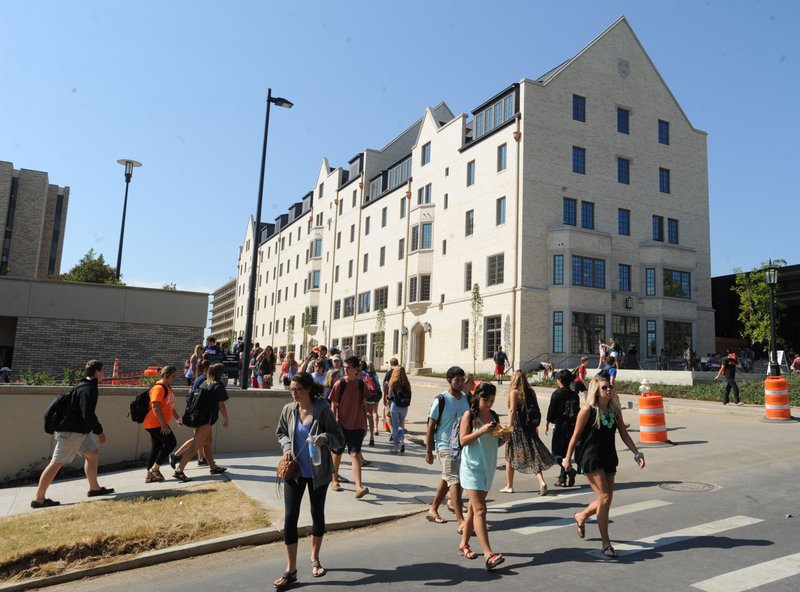 In this 2013 file photo, students cross Dickson Street on the University of Arkansas campus in Fayetteville prior to a dedication ceremony for the newly completed Founders Hall. ( Andy Shupe)

With millions of dollars in restored state funding, Arkansas' public colleges and universities largely plan to save it for a rainy day.

Most schools have set smaller budgets this year, compared with last year, as they anticipate a decline in state revenue because of the novel coronavirus pandemic's economic impact.

The state cut more than $43 million from its forecast appropriations to public institutions in March, a 5% decline that prompted schools to reduce their budgets through hiring freezes, reduced supplies and services, and, in a few cases, furloughs.

But the drop in tax revenue wasn't as bad as the state had expected, so this month it restored all cut funding to institutions.

Still, 13 colleges and universities contacted by the Arkansas Democrat-Gazette don't plan to add the extra money to their budgets this year. Most plan to place it in reserve, as they anxiously await the fall term and enrollment figures. Some have accepted the possibility of unexpected costs associated with preventing a covid-19 outbreak on their campuses.

Arkansas Tech University got $1.6 million back, but spokesman Sam Strasner said "some or all" of it may be needed for "personal protective equipment, cleaning costs, contact tracing, testing and unanticipated expenses related to the pandemic."

Right now, the plan is to put the check in reserves to essentially replace funds Arkansas Tech took from reserves and put into its budget for the current year. The university needed to budget for spending some reserves, Strasner said, to keep tuition and fees from rising for students.

University of Arkansas at Fort Smith leaders expect "a major deficit of state appropriations and sales tax generation," spokeswoman Rachel Putman said. The school budgeted for a loss of $6.5 million this year, to be covered by reserves, and will place the nearly $900,000 in restored money in reserves.

Henderson State University returned the $825,000 it received in covid-19 rainy day funding, which leaders had accepted on the condition that they return it if their state appropriations were restored. The rest of the $872,000 has been spent on general operating expenses, spokeswoman Tina Hall said.

A few community colleges reported that they were still considering what to do with their restored funding. At least six plan to place it in reserves.

In a message to employees, Chancellor Steve Cole, with the Cossatot Community College of the University of Arkansas, said the $327,000 the college got back was "a glimmer of hope."

However, "our budget for the year we are heading into does not look good at all. We will continue to be as conservative as we can with our funds as there are many concerns we still have for this year, especially our enrollment."

The 1,500-student college in De Queen faces a 25% drop in enrollment, he told employees. The college's enrollment grew last year and has declined only 3.6% over the past five years.

National Park College, which received $376,000 in restored funds, has been losing enrollment at a higher rate -- one that's closer to the state average of 14% -- over the past five years. The school has lost 14.2% of its enrollment. The Hot Springs college had just fewer than 1,700 students last fall, which still made it one of the largest community colleges in Arkansas.

The college will place its restored funds into reserves, spokeswoman Melony Martinez said.

"There are many uncertainties with respect to tuition revenue and state category funding," she said, so adding to reserves "seems prudent."