READ TO ME: This little mess-making cat is actually too cute 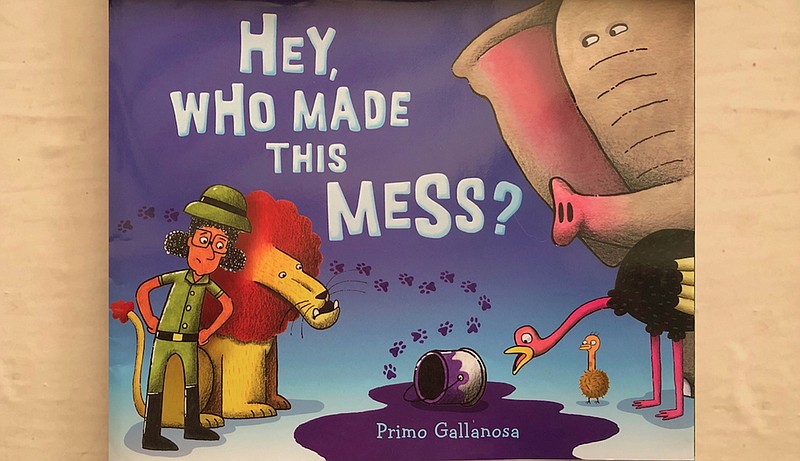 STORY: Some sort of animal has knocked over one of two cans of purple paint that were left beside a lamppost outside the zoo. This animal's prints are high up on the lamp's glass, but it didn't stop there. A trail of purple pawprints meanders away, leading through the barred entrance.

A zookeeper follows the tracks into the zoo. She trails them from one animal display to another, collecting clues as she goes. The evidence suggests that someone has napped in the elephant's haystack. Maybe it was a monster, a sleepy monster. The lion's milk bowl is empty. Maybe the monster was thirsty as well as sleepy. Something went potty in Ostrich's sandbox. Must have been a sleepy, thirsty, stinky monster. And so forth.

At each stop, the animal whose home has been violated joins the zookeeper's entourage. A giraffe comes along, too, and in one of the illustrations' witty bits, we almost never see this animal's head. Meanwhile, the "monster" is still on the scene but easy to overlook. (After the first read-through, kids will enjoy discovering this.)

The trail leads to a traumatized goldfish who claims he has just escaped being eaten and knows who tried to eat him. Then a bear announces that the culprit is in his cave.

But the only animal in there is an adorable little cat. Everyone showers love on this cat except the goldfish, who tries in vain to remind his friends that this monster tried to eat him.

Mystery solved, everyone strolls away, leaving the goldfish alone with the cat.

Luckily for the fish, the cat just wants a hug. This is where this book loses me.

Live in a house with a cat, a child and a member of the prey species routinely eaten by cats and you do not want a book that pretends there's no harm in a sweet little cat. That pretty fib conveys the false impression that a cat might choose not to be a predator. This bad premise leads logical minds to the conclusion that a cat that kills a goldfish is vicious, a monster.

No, you want a book that celebrates the secret to successful cohabitation by predators and prey: protecting the prey.

The illustrations are delightfully colorful and humorous, but the ending wimps out.