Phase II of Monument Trail network offers something for cyclists of all skill levels, and for non-cyclists, too by Bob Robinson | July 13, 2020 at 2:02 a.m. 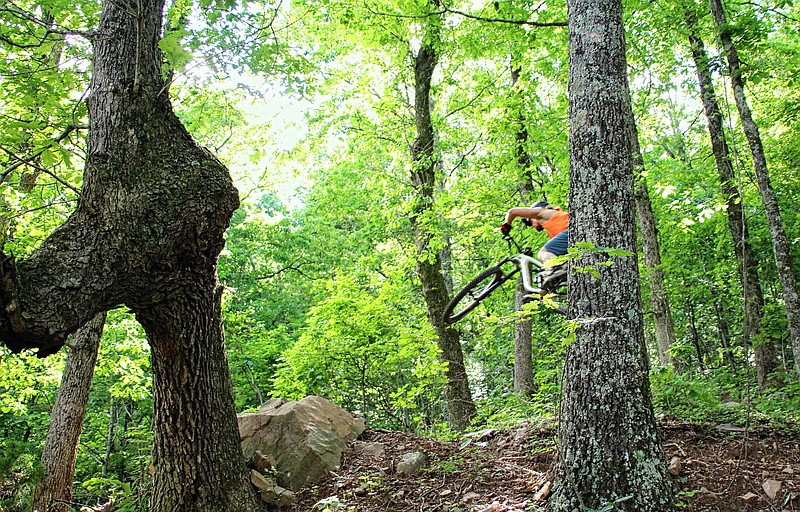 "Have you ridden the awesome new trails at Mount Nebo State Park yet?"

Mountain bikers across the Natural State are hearing this question as riders who have experienced the trails since they opened in June are anxious to share the experience. Phase II of the Mount Nebo State Park Monument Trail network has been one of the most anticipated trail openings in the state.

The completion of Phase I in July 2019 — the exciting, seven-mile Chickalah Valley Loop — whetted appetites with its two-mile downhill run. For Central Arkansas riders who haven't traveled far from home, Phase I presented the first exposure to a trail that was designed from the ground up to be a true gravity-driven experience. Complete with small, fun kickers and black diamond jumps, it challenges even big-air junkies.

As mega fun as the Chickalah is, 7 miles of trail is not enough to justify a long drive; so most of the riders who frequented the trail during its first year were from Central Arkansas. With the additional 18 miles of trails included in Phase II, Grady Spann, Arkansas State Parks director, says, "We have created a mountain bike destination that will draw riders from outside the central section of the state."

Spann explains that the almost 1,000 feet of usable elevation change on the mountain allowed the creation of an experience like that found on world-class downhill trails in the West.

And he should know. Spann was a member of an Arkansas contingent that traveled to British Columbia's Whistler Mountain Bike Park in 2019 to learn what makes for world-class trails and how to market them. The influence of that visit is seen within many features at the Mount Nebo State Park trail system.

Mount Nebo's Phase II has not only lengthened the system, it has added diversity, in trails that offer something for all skill levels.

For those riders who have been enjoying redo-after-redo on the Chickalah Downhill run over the past year, on your next visit to the park drop into Phase II's even longer Hayes Creek Run. It's on the opposite side of the mountain. Sheer adrenaline, heart-pumping speed is the theme for this downhill thrill ride.

Hayes may require a few "getting to know you" do-overs to become comfortable enough to lay off your brakes and trust the high, banked earthen berms Rock Solid Trail Contracting built to navigate the sharply sweeping switchbacks sprinkled throughout the run. But eventually, you will be happily cruising down the mountainside in the manner Hayes was meant to be ridden — all out.

This run also includes a picturesque bridge, a work of art with a pristine waterfall backdrop that will have riders pausing for photo ops.

But as all mountain bikers are all too aware, what goes down must go up. The climb back to the mountaintop is by way of the steep, 2-mile Ox Pull Trail. The name was inspired by park history: Early visitors had to switch out their horses for strong oxen to pull their wagons up the steep mountainside.

However, cyclists might soon have an option to hitch a ride back to the top with a modern-day beast of burden. Spann says the parks department would listen should an enterprising entrepreneur approach them with a plan to operate a for-pay shuttle service. Having ridden the 20-some minute climb up Ox Pull, I believe operators could name their price for a shuttle up that mountain.

After topping out on Ox Pull, riders can cross the highway to jump onto Miller's Goat Trail. This is a fun-filled, 6-mile, green-rated trail, with minimal climbing. It meanders around the entire mountain, offering spectacular views of the lush river valley below from a wide variety of perspectives. It also includes stretches of rock gardens where beginners can hone their bike-handling skills.

Riders can also use Miller's to connect the Sunrise and Sunset Points by following signs for the relatively short climbs on signed connector trails.

Visitors can also connect the two vistas by riding the beginner — and strider-bike-friendly — two-mile Three-C Trail that stretches across the entire length of the mountaintop. Along the way, riders will be introduced to rustic cabins, pavilions and campground structures crafted by the 1930s-era Civilian Conservation Corps, for which the trail is named.

For the more skilled mountain bikers, the cherry atop Mount Nebo State Park trail system is sure to be Lizard Tail, the only true black-diamond trail in the system. This two-mile stretch earns its high-difficulty rating due to the narrow tread of raw-techy-rock that routes cyclists along the exposed bluff rim of the mountain.

Lizard also allows cyclists to get up close and personal with the picturesque sheer rock bluffs that form the mountain. After seasonal showers, as the trail weaves its way behind the dripping waters of Gum Springs Falls, cyclists could choose to pause for a refreshing shower.

NOT JUST FOR CYCLISTS

Mountain bikers are not the only visitors who are enjoying the new trails. The original CCC trails at Mount Nebo State Park are a popular attraction for trail runners and hikers.

Also, the steep, challenging hike (or run) up the paved entrance to the park has long been a rite of passage for area athletes. And now, with the equally challenging Ox Pull Trail paralleling the highway entrance, pedestrians have the option of avoiding vehicular traffic by following the safer dirt path.

Michael Witt, treasurer of Arkansas River Valley Runners, says the running community is very excited about the new trails. He plans to use the added miles included in Phase II to create a new 25K race to accompany the 4-mile Mount Nebo Bench Trail Race he conducts annually at the park.

This diversity in usage was part of the Arkansas Parks and Recreation Foundation master plan and a reason for creating the Monument Trails. Although the trails are designed with an emphasis on cycling, they will differ from many other mountain bike trails found throughout the state. 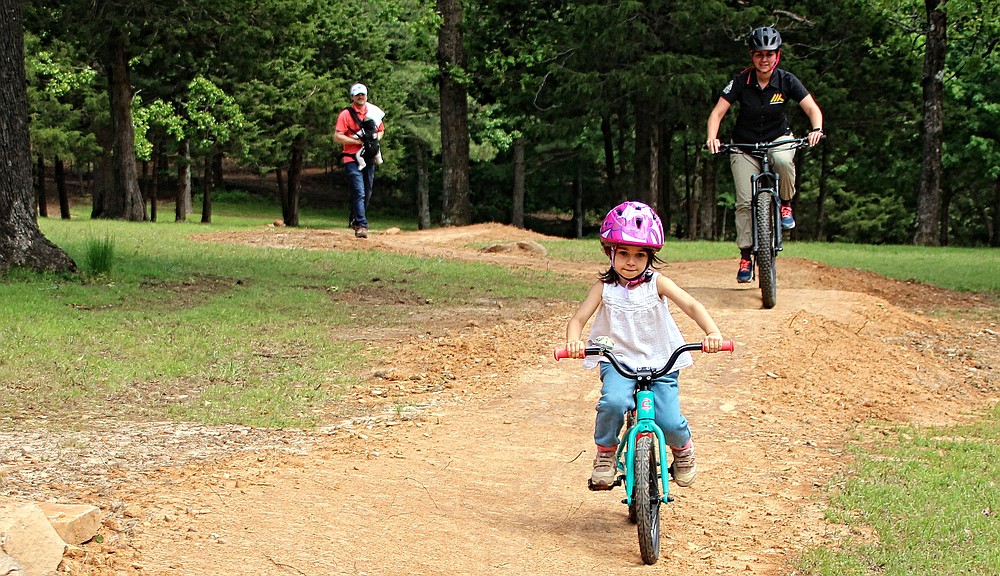 Suzanne Grobmeyer, executive director for the Arkansas Parks and Recreation Foundation, pursues her daughter Margaret with husband Andrew and son George following on a child-friendly path at Mount Nebo State Park. (Special to the Democrat-Gazette/Bob Robinson)

As Suzanne Grobmyer, executive director of the foundation, stated, "We do want to encourage visitors to not just ride the trail, but to take in everything natural the area offers."

Mount Nebo was chosen as a site for one of the initial Monument Trail networks in part for its central location in the state. A series of studies funded by the Walton Family Foundation determined that the trail development that has taken place in Northwest Arkansas over the past decade resulted in $137 million of economic benefits for that area during 2017.

By developing the trail network at Mount Nebo State Park, Spann explains, the state is working to bring similar economic opportunities and health-related benefits to another region of the state. With the completion of a Monument Trail currently under construction at Pinnacle Mountain State Park, he says, the combination of the pair of world-class trails will draw visitors from Oklahoma, Texas and Louisiana, in the way the Northwest trails attract visitors from Kansas and Missouri.

When these visitors are planning their mountain biking road trip to a Monument Trail, and they learn about other equally exciting trails in Central Arkansas, such as the Iron Mountain and Northwoods trails, they will extend their stay, he says. This will result in an economic boom for the small communities near these trails as they cater to the bicyclists' housing and dining needs.

Mount Nebo State Park is equipped to accommodate visitors. With rental cabins, a campground, swimming pool and hiking trails, all on a mountain plateau offering a 360-degree view of the surrounding lush river valley below, it is a family-friendly destination.

At its inception, the Arkansas Parks and Recreation Foundation proposed a ten-phase development plan for constructing Monument Trails within the state. With the two Monument Trails completed in Phase I, the Pinnacle Mountain trail scheduled for completion in the fall, construction underway to add trails and revise exiting ones at Devil's Den State Park, and plans forming to update the Hidden Diversity Trail at Hobbs, the foundation is well on its way.