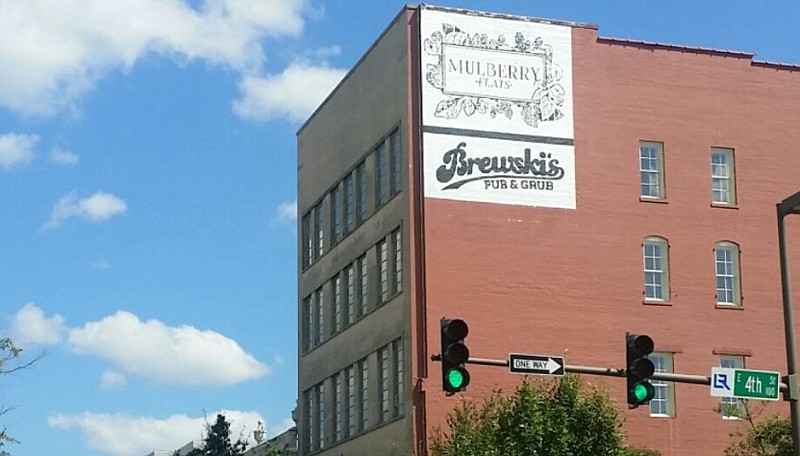 A sign for Brewski's Pub & Grub is visible on the side of the downtown Little Rock building that houses it in this September 2017 file photo.

Before the shutdown of Little Rock's Brewski's Pub and Grub over allegations that it had flouted coronavirus guidelines, the Arkansas Department of Health issued formal warnings to three other restaurants over noncompliance with pandemic safety rules, records show.

Members of the public -- and sometimes restaurants' own employees -- also have made more than 250 complaints to the agency since May about similar violations at restaurants, bars and other establishments, saying workers and customers didn't wear masks, keep 6 feet apart or follow other directives. A Paragould pizza chain's manager didn't ask a feverish employee to go home, a caller said.

South Park Restaurant in Clarksville, Flying Burger in El Dorado and Buffet City in Benton received warning notices for violations that inspectors noted, Health Department records show. Sites that received letters could have their licenses suspended or be fined for repeat violations.

Warnings, complaint data and reports obtained under the state's public-records law suggest uneven compliance with state covid-19 health directives for restaurants and bars, the most frequent subject of complaints, according to the newspaper's review. The records also reveal the challenge of enforcing the rules.

While virus cases climbed, complaints poured in from cities across the state, from Alma to West Memphis, according to the records. The Health Department received at least nine complaints about the Clarksville restaurant, officials said.

"The ongoing disregard for the protection of public health is noted by this letter," the June 5 warning notice, sent to South Park owner Dean Hammons, reads. "Please note that these complaints came from the local community."

Hammons did not return a message left at a cellphone number listed for him. An employee who answered the phone at the restaurant late last week first denied the site received such a letter, then said the manager on duty "doesn't want to talk to anybody right now."

During the pandemic, the Health Department has issued multiple revisions of rules governing dine-in and bar operations for the state's phased reopening. New rules that went into effect June 15 limit occupancy to 66%, ban self-service areas and require screenings and masks for staff members, among other measures.

Those restrictions returned to the spotlight after the forced closure of Brewski's Pub and Grub on July 4 after health officials traced an infection cluster to the business. A Board of Health order said the business ran over its capacity and that a manager had said of customers: "We can't make them wear masks. We wish they would, but we can't do much."

The pub's owner last week told the newspaper that he was cooperating with health officials, and the health agency is working to develop a compliance plan.

Data reviewed by the newspaper did not always include information about whether complaints were investigated in person or substantiated, so some establishments are not named here. Records are incomplete and came from several sources, including hotline calls, emails and inspections across a few Health Department divisions.

Sherri Woodus, retail food services manager at the Health Department, said complaints to the agency have waxed and waned as more people venture out of their homes and visit businesses. She said the agency takes an education-based approach to enforcement and stressed that regulators are "not the villains -- we're not trying to shut you down."

"The lion's share of the establishment owners and operators are trying to [follow] the directive as best as they can interpret it," she said.

Others may have a resource issue -- "maybe they don't have the ability to get masks," she said. "And then there's that small fraction that just doesn't want to do it."

The Arkansas Hospitality Association's chief executive officer, Montine McNulty, said there may have been early confusion about the recommendations. Restaurateurs are "doing everything they can to comply. ... I think they really understand that it's for everybody's best interest, including their own staff," she said.

Before the Brewski's closure, records show, the Health Department was inundated with telephone and email complaints, including about the three restaurants that received warning letters.

The El Dorado restaurant was not requiring masks, screening employees or limiting visitors, and it offered a condiment bar and access to self-serve items, an inspector found.

The Benton restaurant had a self-serve buffet, didn't require masks, denied entry to an inspector and "refused to sign the inspection report," officials said in a letter.

Stakes for compliance remain high as covid-19 cases grow in Arkansas and across the South. Amid the spike in infections, Miami closed down indoor dining last week, and many Houston restaurants closed voluntarily, reports said.

Researchers continue to evaluate the risk that visits to such establishments pose. The federal Centers for Disease Control and Prevention categorizes on-site dining with indoor and outdoor seating as an "even more risk" category on its website, and it says that restaurants and bars should take action to reduce the spread of illness among customers and employees.

Gov. Asa Hutchinson has stressed the need for cooperation from both residents and businesses, urging Arkansans to act responsibly. But in some instances, businesses or patrons dismiss protective rules, records show, including at a chain diner in Springdale, where an employee called in an anonymous complaint.

"Managers told her that they are not the police and are not requiring their customers to wear masks if they did not want to," a database entry says.

At a family restaurant with locations in Batesville and Maumelle, a complainant said workers weren't wearing masks and that an employee "told him that it gives her anxiety to wear them." Employees also weren't wearing masks at a chicken wing restaurant in Bentonville, a complainant alleged on June 14, even as infections accelerated in the Northwest region.

A few entries in one database also hint at frustration among agency staff members, as in a short write-up regarding a complaint about a Batesville food mart.

Hutchinson announced on June 26 that Alcoholic Beverage Control agents, who regularly partner with the Health Department, will help monitor for adherence to health directives. That agency has conducted 107 unannounced inspections and found seven instances of sites not following guidelines, a spokesman said last week.

In a statement, Hutchinson said businesses have the "greatest motivation" for compliance, which is "to keep their customers and staff healthy and to protect their business model and investment."

He said education and enforcement have helped bring more places in line, and he attributed problems some outlined in the complaints to customers' failure to stick to regulations, and to "the difficulty of the business owner trying to enforce the rules."

Woodus, the Health Department manager, said she thought local ordinances encouraging or requiring mask usage will help with more widespread adoption of the rules. In her view, a "failure to cooperate" has slowed reopening.

"I really want the public to hurry up, and let's all do this together so we can stop this," she said.

"There's a certain percentage of the population that are going to be against wearing a mask, no matter what," said McNulty, the Hospitality Association director. "The fact is, they don't need to be in a public restaurant."

Complaints about violating Arkansas health guidelines aren't limited to restaurants and bars, though those were the most frequent subjects of reports.

Inspectors verified at least 28 complaints against hair and nail salons, records show. They included a Sherwood beauty school and salon, which a complainant said was skirting a rule against walk-in visits by allowing people to walk in, make an "appointment," step outside briefly and then go back in.

The salon received a warning letter for not following directives on May 27.

Information for this article was contributed by Eric E. Harrison of the Arkansas Democrat-Gazette.