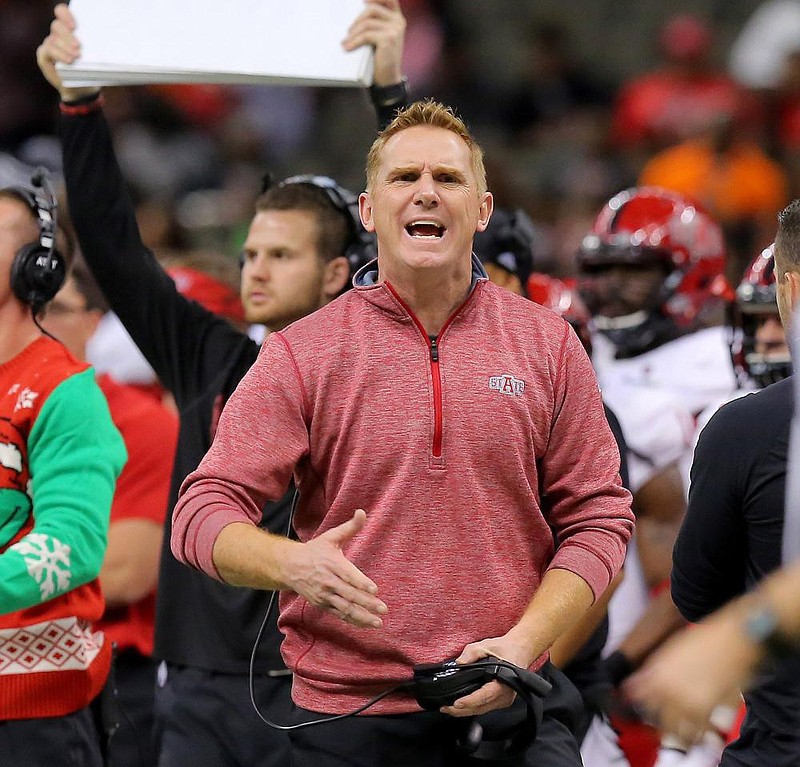 12/19/15 Arkansas Democrat-Gazette/STEPHEN B. THORNTON Arkansas State University's head coach Blake Anderson argues a call in the first quarter in first half during the New Orleans Bowl Saturday night at the Superdome in New Orleans, La.

Arkansas State University Coach Blake Anderson wants his team to have a legitimate shot at making the 2020 season a memorable one.

But the coronavirus pandemic has beaten the Red Wolves to it.

The fallout from the virus already has caused the Big Ten and Pac-12 to amend their scheduling plans for the fall. Others, like the Patriot League and Ivy League of the FCS, have scrapped their seasons all together.

Anderson hopes that doesn't happen in the Sun Belt Conference.

"This thing is here, and it's not going to just disappear," he said of the virus. "We've all been hoping that we would make some progress towards mitigation on it, and that we would get to a point where we could kind of deal with it like we do other viruses, such as flu-like type of stuff. But we still don't know enough apparently about this particular virus.

"So my concern level about actually having a season is high. Until somebody comes out, stands on the table and says that this is what we're going to do and this is how we are going to do it, the effect the virus could have on our season concerns me tremendously."

The one thing that doesn't concern Anderson is the way his players have responded since they've been back on campus.

Anderson said about 95% of his team returned June 1, the first day players were allowed to return. The seventh-year coach said he knew there would be an adjustment period for his players, particularly because of the arranged protocols designed to limit their chances of contracting the disease.

Anderson and his coaches aren't allowed to hold practices or training sessions, but he said that hasn't derailed the team's progress.

"It was obvious that they weren't in great shape when they came back," he said. "The guys were working out on their own back home, which is good. But it's just not the same. As we've gotten back into kind of a routine, they're coming around though.

"They're working hard and doing a really good job. I think they're glad just to be back in some structure because that's something you miss when you're away. It looks like they're responding, and things are moving in the right direction."

Covid-19 cases are rising, which Anderson said doesn't bode well for any school trying to regain a sense of normalcy.

"This virus is taking away so much, and that's been the hardest part of the whole deal," he said. "The relationships, the camaraderie with the staff and the players, that's why I coach. I didn't get into coaching because I thought I was going to make a bunch of money.

"We've been virtual since March basically, and still at this point, we're not really in person with the players at all even with them being back on campus. Everybody has had to change across the country. Hopefully, somewhere in the near future, we can get back to some version of life as we know it."

The pandemic already cost the Red Wolves one game this season. ASU was supposed to play Michigan on Sept. 19 on the road. When the Big Ten shelved nonconference games, that left a hole in the Red Wolves' schedule.

"For us, we want to play as many games as we possibly can. We're hoping we can play all our other nonconference games, and honestly, we're looking to fill that spot because we'd love to play 12 games if that is possible."

The Red Wolves continue preparations in anticipation for their season opener at Memphis on Sept. 5. Anderson said his team is doing what's necessary to be ready.

"We're just hoping that between now and Sept. 5, when the season is supposed to start, we will continue to get more and more good news toward how we're going to be able to deal with the virus," he said. "Naturally, I'm nervous about it because there's still so much that we don't know. Safety is foremost, though, and that's the most important thing.

"But at the same time, I think part of being safe and being healthy is just living life. Emotionally, I think the country would love some ball. Our kids can't wait to play, and we'd like to get back out and do what we love. I'm hoping and praying we get back to that point."