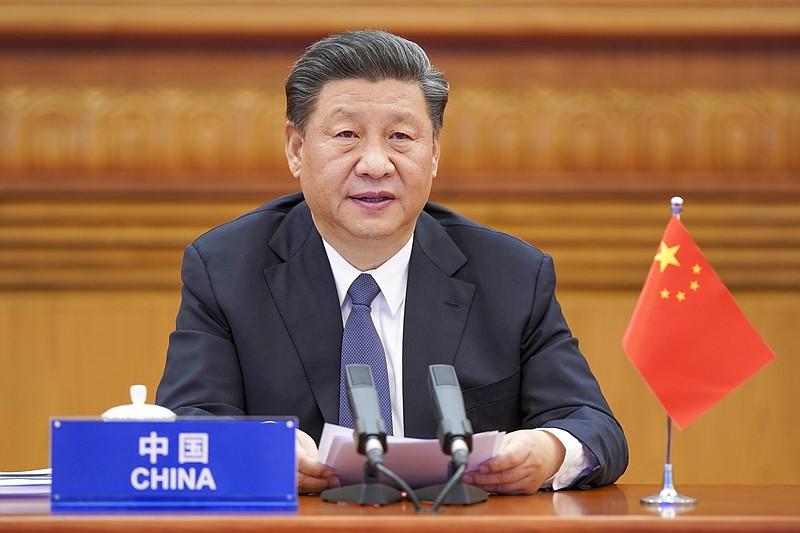 Tensions between Beijing and Washington escalated Monday as China imposed sanctions on four U.S. officials -- including three Republican members of Congress -- and Secretary of State Mike Pompeo declared most of China's maritime claims in the South China Sea "completely unlawful."

"The world will not allow Beijing to treat the South China Sea as its maritime empire," Pompeo said in a statement, accusing China of a "campaign of bullying" to control offshore resources that other countries in the region also lay claim to.

"America stands with our Southeast Asian allies and partners in protecting their sovereign rights to offshore resources, consistent with their rights and obligations under international law. We stand with the international community in defense of freedom of the seas and respect for sovereignty and reject any push to impose 'might makes right' in the South China Sea or the wider region."

Previously, U.S. policy had been to insist that maritime disputes between China and its smaller neighbors be resolved peacefully through United Nations-backed arbitration. But Pompeo said the U.S. now regards virtually all Chinese maritime claims outside its internationally recognized waters to be illegitimate.

The shift does not involve disputes over land features that are above sea level, which are considered to be "territorial" in nature.

Although the U.S. will continue to remain neutral in territorial disputes, the announcement means the administration is in effect siding with Brunei, Indonesia, Malaysia, the Philippines and Vietnam, all of which oppose Chinese assertions of sovereignty over maritime areas surrounding contested islands, reefs and shoals.

The announcement was released a day after the fourth anniversary of a binding decision by an arbitration panel in favor of the Philippines that rejected China's maritime claims around the Spratly Islands and neighboring reefs and shoals.

China has refused to recognize that decision, which it has dismissed as a "sham," and refused to participate in the arbitration proceedings. It has continued to defy the decision with aggressive actions that have brought it into territorial spats with Vietnam, the Philippines and Malaysia in recent years.

The other Americans targeted are Sam Brownback, the Trump administration's ambassador for international religious freedom, and Rep. Christopher Smith, R-N.J.

No details were disclosed on what the sanctions would involve, but the move comes days after the Trump administration banned three Chinese officials from visiting the United States and froze any U.S. assets they might have.

The measures expand the tit-for-tat hostilities between Beijing and Washington -- which already encompass trade, technology and media freedoms -- into a new sphere.

"Xinjiang affairs are China's internal affairs, and the U.S. has no right to interfere in them," Foreign Ministry spokeswoman Hua Chunying told reporters in Beijing.

"We urge the United States to immediately withdraw its wrong decision," she said, adding that China would make further decisions based on how the situation evolves.

In addition to stopping them and their immediate family members from entering the United States, the designation freezes their U.S. assets and prohibits Americans from doing business with them.

The law, introduced by Rubio and Sen. Robert Menendez, D-N.J., was passed unanimously by the Senate and the House. It required the U.S. government to compile a report about the extent of the Chinese crackdown in Xinjiang and provide potential individual targets for sanctions.

More than a million people, most of them ethnic Uighurs, have been interned in detention camps across the northwestern region as part of a concerted effort by the Communist Party to forcibly assimilate the mostly Muslim ethnic minorities into the majority Han culture.

The Communist Party says the measures are needed to "deradicalize" people, but the United Nations and many Western nations have condemned the campaign as a gross violation of human rights.

The Associated Press reported this month on measures the Chinese government is taking to slash birthrates among Uighurs and other minorities, part of a drive to curb China's Muslim population. These include forced contraception, sterilization and abortion.

In The Washington Post's editorial section Monday, national security adviser Robert O'Brien said the United States would not stand by while the Communist Party committed these abuses.

"If the past century has shown us anything, it is that dangerous ideologies backed by powerful states rarely confine their malign conduct within their own borders," he wrote. "The United States will thus continue to shine the light of truth on Xinjiang -- for the Uighurs and for us all."

"The Chinese government is determined in safeguarding national sovereignty, security and development interests, and in fighting terrorists, violent separatists and religious extremist forces," she said.

The mounting confrontation over Xinjiang comes amid a rapid deterioration this year in relations between the world's two largest economies.

Trump and his senior officials have repeatedly accused China of covering up the outbreak of the novel coronavirus that began in the city of Wuhan at the end of last year and allowing it to spread across the world.

The State Department issued a travel warning for China over the weekend, telling U.S. citizens to exercise increased caution "due to arbitrary enforcement of local laws for purposes other than maintaining law and order," which may include detention, prolonged interrogations and exit bans.

Hua said the travel alert was misguided. "People in the U.S. are worried about a return of notorious McCarthyism, so by issuing this travel alert under such circumstances, the U.S. is apparently seeking pretexts for arbitrarily undermining Chinese citizens' rights and interests in the U.S.," she said.

Information for this article was contributed by Liu Yang and Carol Morello of The Washington Post; and by Matthew Lee and Lolita C. Baldor of The Associated Press.