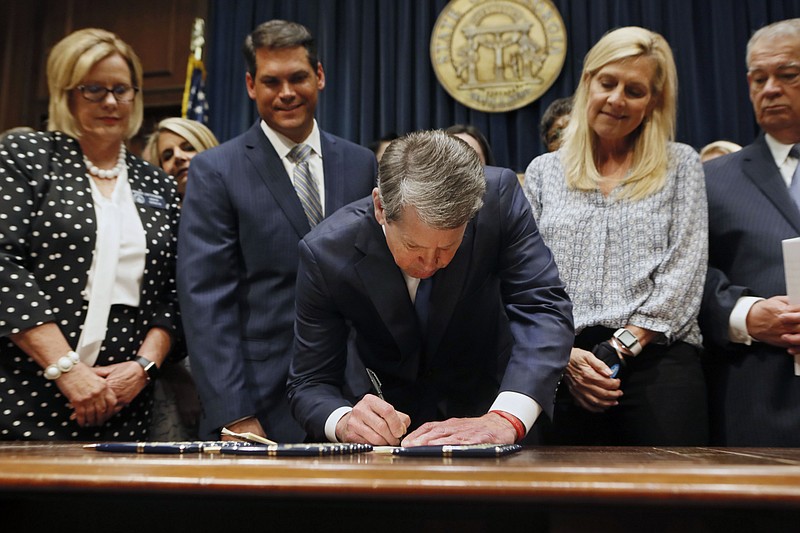 FILE - Georgia's Republican Gov. Brian Kemp, center, signs legislation Tuesday, May 7, 2019, in Atlanta, banning abortions once a fetal heartbeat can be detected, which can be as early as six weeks before many women know they're pregnant. A federal judge is permanently blocking Georgia’s 2019 “heartbeat" abortion law, finding that it violates the U.S. Constitution. U.S. District Judge Steve Jones ruled against the state Monday, July 13, 2020, in a lawsuit filed by abortion providers and an advocacy group. (Bob Andres/Atlanta Journal-Constitution via AP, File)/Atlanta Journal-Constitution via AP)

ATLANTA -- In one of several federal court rulings Monday dealing with abortion, a judge issued an order to permanently block Georgia's "heartbeat" law after finding that it violates the Constitution.

Federal judges in Maryland and Tennessee also made rulings on abortion cases.

U.S. District Judge Steve Jones ruled against the Georgia law in a suit filed by abortion providers and an advocacy group. Jones had temporarily blocked the law in October, and it never went into effect. The new ruling permanently enjoins the state from enforcing House Bill 481.

Georgia's measure sought to ban abortions once a "detectable human heartbeat" was present, with some limited exceptions. Cardiac activity can be detected by ultrasound as early as six weeks into a pregnancy, before many women realize they're pregnant, according to the legal challenge. The bill narrowly passed in the Georgia General Assembly amid intense lobbying for and against it.

Lead plaintiff SisterSong, an Atlanta-based organization that fights abortion restrictions on behalf of women from minority groups, called it a "huge win for bodily autonomy."

"No one should have to live in a world where their bodies and reproductive decision making is controlled by the state," SisterSong Executive Director Monica Simpson said in a statement.

Republican Gov. Brian Kemp, who has supported the restriction, immediately vowed an appeal.

"We will appeal the court's decision," Kemp said in a statement. "Georgia values life and we will keep fighting for the rights of the unborn."

The prospects of an appeal are uncertain, though, considering the U.S. Supreme Court last month struck down abortion restrictions from Louisiana.

Women in Georgia can currently seek abortions during the first 20 weeks of pregnancy.

Both the state and those challenging the law asked Jones to rule without a trial, saying there were no disputed facts. Jones granted the challengers' motions for summary judgment and denied the state's motions, finding the law violated the 14th Amendment.

Jones refused to leave in effect any parts of the law, which would have also granted personhood to fetuses, giving them the same legal rights as people have after they're born. For example, a mother could have claimed a fetus as a dependent to reduce taxes.

U.S. Supreme Court precedent has for nearly five decades held that states cannot ban abortion before the viability of a fetus, and the Georgia law's opponents argued that it was unconstitutional because it did just that.

The state argued that the law promoted fetal well-being. It was widely considered to be one of a number of attempts to create fresh legal challenges to abortion after two conservative justices were confirmed to the Supreme Court. The high court, in a 5-4 ruling June 29, struck down another of those challenges, that one involving regulations from Louisiana.

The legal director of the American Civil Liberties Union of Georgia, one of the groups that brought the lawsuit in that state, said any appeal would be fruitless.

"The district court blocked Georgia's abortion ban, because it violates over 50 years of Supreme Court precedent and fails to trust women to make their own personal decisions," Sean Young said in a statement. "This case has always been about one thing: letting her decide. It is now up to the state to decide whether to appeal this decision and prolong this lawsuit."

In Maryland, U.S. District Judge Theodore Chuang agreed Monday to suspend a U.S. Food and Drug Administration rule that requires women during the coronavirus pandemic to visit a hospital, clinic or medical office to obtain an abortion pill.

Chuang concluded that the "in-person requirements" for patients seeking medication abortion impose a "substantial obstacle" for the patients and are likely unconstitutional under the circumstances of the pandemic.

"Particularly in light of the limited timeframe during which a medication abortion or any abortion must occur, such infringement on the right to an abortion would constitute irreparable harm," the judge wrote in his 80-page decision.

Chuang's ruling will allow health care providers to arrange for mifepristone to be mailed or delivered to patients during the public health emergency declared by the secretary of the U.S. Department of Health and Human Services. The FDA approved mifepristone to be used in combination with a second drug, misoprostol, to end a pregnancy or manage a miscarriage.

"By causing certain patients to decide between forgoing or substantially delaying abortion care, or risking exposure to COVID-19 for themselves, their children, and family members, the In-Person Requirements present a serious burden to many abortion patients," Chuang wrote.

Indiana, Louisiana, Alabama, Arkansas, Idaho, Kentucky, Mississippi, Missouri, Nebraska and Oklahoma had asked to intervene in the lawsuit. The 10 states argued that the case could affect how they enforce their own laws that relate to or reference the FDA's regulation of mifepristone.

Chuang rejected their request last month. The judge said the federal case would not eliminate any state's ability to continue to regulate abortion medication "above and beyond" the FDA's requirements.

In Tennessee, Gov. Bill Lee on Monday signed one of the strictest abortion bans in the country, and a federal judge quickly blocked the measure.

U.S. District Judge William Campbell in Nashville opted to wait for the bill to become law before ruling on whether to block the bans included in it. In granting the temporary restraining order Monday, he wrote that he is "bound by the Supreme Court holdings prohibiting undue burdens on the availability of pre-viability abortions."

Lee, who announced the legislation in January alongside Republican lawmakers, said during a livestream from his desk Monday that he was signing "arguably the most conservative, pro-life piece of legislation in the country."

Plaintiffs seeking to block the measure quickly let the court know that it was signed and effective immediately, "meaning that nearly all abortions in Tennessee have been criminalized." The court's ruling followed shortly after, blocking the law pending a July 24 hearing.

Planned Parenthood, the ACLU and the Center for Reproductive Rights filed the lawsuit hours after the bill was passed.

Under the law, abortions are banned once the fetal heartbeat is detected. The law also includes a prohibition on abortion based on race, sex or diagnosis of Down syndrome. The court blocked that provision as well.

The court's action leaves in place some abortion requirements in the new law, but those don't further limit the procedure in Tennessee.

One spells out requirements for a medical professional to offer to show the pregnant woman an ultrasound and let her hear sounds of a fetal heartbeat before she consents to have an abortion.

Another requires medical providers and the state Department of Health to provide information about the possibility of reversing medication abortions. Opponents of the requirement say the reversal method is scientifically unproven and disputed in the medical community.

Information for this article was contributed by Jonathan Mattise and Michael Kunzelman of The Associated Press. 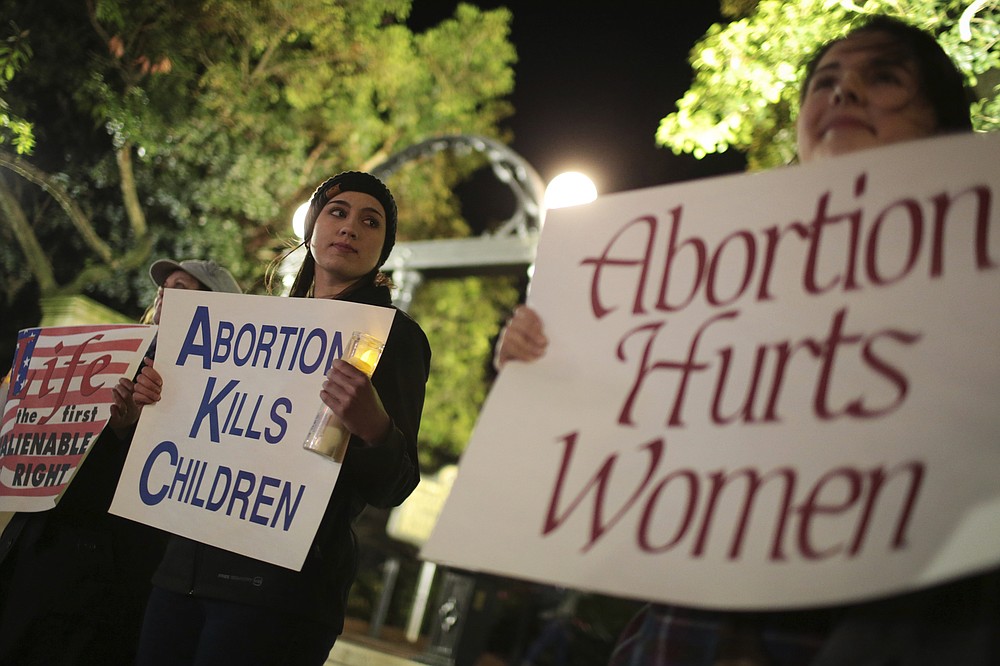 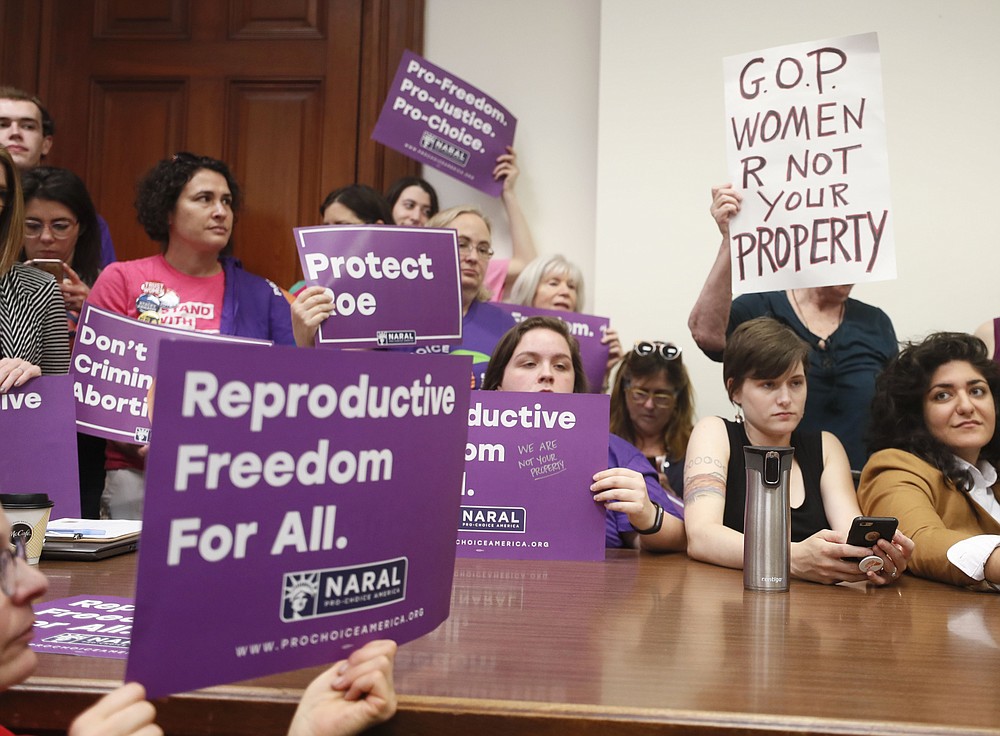 File-Supporters crowd a meeting room before a roundtable discussion at the Georgia State Capitol in Atlanta on Thursday, May 16, 2019, to discuss abortion bans in Georgia and across the country. A federal judge is permanently blocking Georgia’s 2019 “heartbeat" abortion law, finding that it violates the U.S. Constitution. U.S. District Judge Steve Jones ruled against the state Monday, July 13, 2020, in a lawsuit filed by abortion providers and an advocacy group. (Bob Andres/Atlanta Journal-Constitution via AP, File) 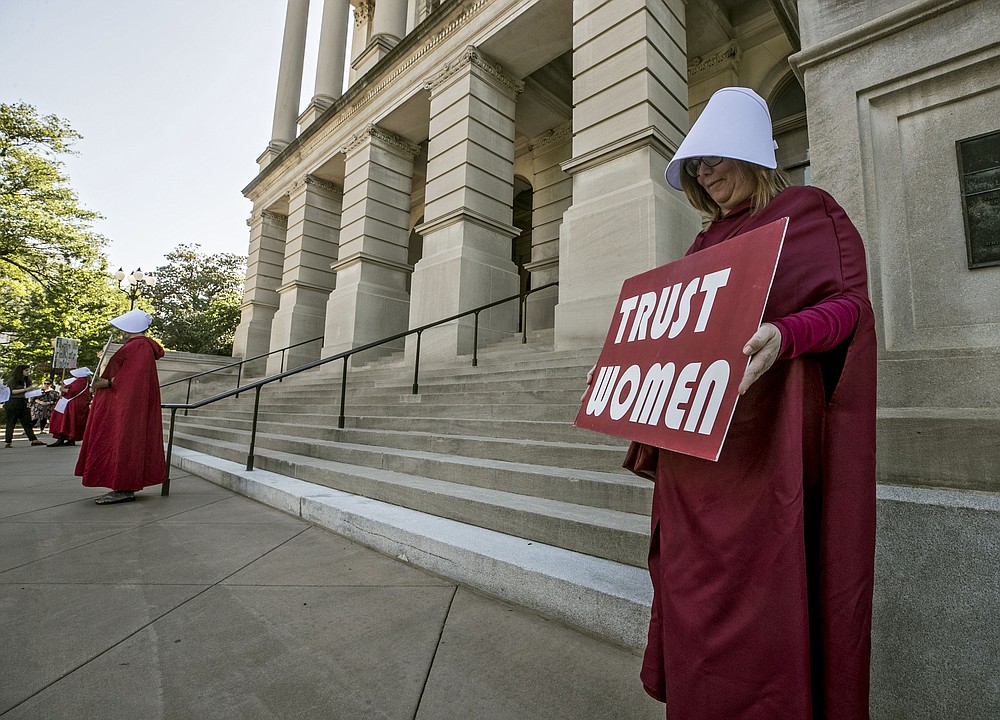 File-Michelle Disher, from Roswell, and others dressed as characters from "The Handmaid's Tale", protest outside the Capitol where Georgia's Republican Gov. Brian Kemp, was to sign the legislation, Tuesday, May 7, 2019, in Atlanta, banning abortions once a fetal heartbeat can be detected, which can be as early as six weeks before many women know they're pregnant. A federal judge is permanently blocking Georgia’s 2019 “heartbeat" abortion law, finding that it violates the U.S. Constitution. U.S. District Judge Steve Jones ruled against the state Monday, July 13, 2020, in a lawsuit filed by abortion providers and an advocacy group. (Bob Andres/Atlanta Journal-Constitution via AP, File)
ADVERTISEMENT