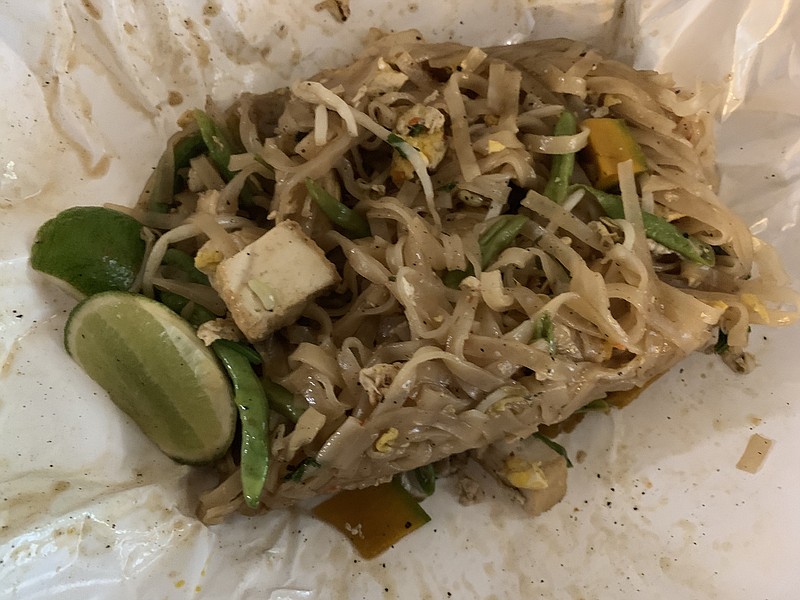 The kitchen at kBird rolled our Pad Thai with tofu in a piece of butcher paper instead of a to-go container. (Arkansas Democrat-Gazette/Eric E. Harrison)

We've been dining out professionally in this town, as one of our recent interviewees put it, "since Moby-Dick was a minnow."

For that long and longer, when we're not dining out, we've been taking out. (We know which end of a microwave is up. Other than that, we don't cook much.)

Even at a proper social distance and with all precautions in place (and while there are plenty of places that operate according to the rules, there are places that don't), the current state of "covidity" in this state not only hasn't encouraged us to drop our masks and eat in, but bold as we are, we're not that bold. We want our columns to go viral, not, er, us.

We are extending our reach to a few places outside our original radius (gotta still be hot when we get it home) to include a few places to which we have fairly quick access by interstate highway. Otherwise, all our rules are still in effect. We don't do these mini-reviews on request. And we pay for all the meals we grab to-go.

WHAT WE GOT: Pad Thai with tofu ($11). The guys who run kBird learned Thai cooking in Thailand, and have spent part of every year shutting the place down and traveling back there to refresh techniques and learn new ones. So you know that the dishes there are authentic. Every time we look at the menu, which is posted weekly by writing it in marker on brown paper and taping it to a board in front of the counter, we're intrigued by the possibilities for exploration and experimentation, but the combination of our being old-sticks-in-the-mud and the caution that develops when considering something that might be just a bit too spicy tamps down our spirit of adventure.

Which is why we went back to that old fallback/standby, Pad Thai, which kBird makes as well or better than just about anybody. They use a thicker noodle, more like fettuccine than, say, linguine or angel hair, which is the way they did it at the place where we first encountered the dish, and which we therefore prefer. But otherwise, it's just plain excellent, tossed with a few vegetables (kBird includes green beans, which we've never seen anywhere else) in a strong brown sauce, just spicy enough to remind us that it could be a really spicy dish if we wanted it that way. We got ours with tofu; chicken is an option for a dollar more. Since kBird's dining room has not opened, everything is to-go; what's new in the too-long-since-we-were-last-there interim is that instead of putting our food in a plastic, foam or even a compostable cardboard container, they rolled it up in a piece of white butcher paper, which they stuck into a small brown paper bag. How refreshing and environmentally friendly. So we had to come up with our own plate at home, but they provided chopsticks and a plastic fork.

HOW IT WENT: We placed our order by phone; it was just short of being ready when we arrived, whereupon we paid for it. The front counter has been moved forward to the middle of the former dining room, with linked tables forming a barrier on which sits a little toy cash register and a credit-card reader Bluetooth-connected to a cellphone. Everybody wore masks and gloves.

HOW IT'S GOING: We were the only customers early in a lunch period.

WHAT WE GOT: Playa Azul Enchilada ($13.49), three enchiladas, filled with sauteed tilapia and shrimp, with tomatoes, onion, Serrano peppers and cilantro and "topped with our unique jalapeno cream sauce." For some reason, and probably because a colleague wrote the review when it opened, we had not previously visited this restaurant (the original location is on McCain Boulevard in North Little Rock's North Hills neighborhood). This enchilada plate looked like a safe bet from the order-online menu, so we went for it, and it was a pretty safe bet, if a bit bland. What we principally noticed was the firmness of the small shrimp; what we didn't notice was the peppers or anything even remotely spicy about the "unique jalapeno cream sauce." The accompanying black beans were firm and tasty but in a soupy broth, some of which could have been drained off from the separate foam container, and we enjoyed the tequila lime rice. We also got fresh crisp tortilla chips with separately packed mild red and slightly zippy green salsas.

HOW IT WENT: The dining room is open, but we ordered and paid online; the online menu is divided into categories, so it took a little time to explore our options. Our order was ready when we arrived and we were in and out the door with it in about 30 seconds. All front-of-house personnel we observed were masked and gloved.

HOW IT'S GOING: The parking lot was a hive of activity; there were some indoor customers and more dining on the patio, and a couple of other pickup orders awaiting customers' arrival.

WHAT WE GOT: OMG! roll ($14), Chef's Selection sashimi ($28). Sushi wizard Alex Guzman, who cut quite a swath at Sushi Cafe before Jerry Barakat lured him away in 2014, and his staff at Ocean's sushi bar, continue to do impressive work. Our roll was huge and magnificent, spicy tuna, "crab stick" (surimi) and avocado in a deep-fried shell, and far and away outclassed a similar roll we reported on last week from a competitor. Our 12-piece sashimi plate consisted of the usual sashimi suspects — tuna, salmon, red snapper, yellowtail, "crab stick") and escolar (sometimes incorrectly labeled as "white tuna") but cut very thick, so we got what, in our estimation, was a good deal more fish for our money that we have at other places (where a similar plate often costs a great deal more).

HOW IT WENT: The dining room here and at next-door Arthur's Prime Steakhouse, both of which closed briefly last week for deep cleaning after two employees tested asymptomatically positive for covid-19, so we dropped in very early in the dinner period and placed our order in person. That confused the hostess, who was all set to take the make and model of our car and other information so she could engineer a curbside hand-off (unnecessary, of course). We were not permitted to sit at any of the unoccupied but socially distanced front-area dining tables, and were directed to sit at the back side of the bar, where we paid for our meal through a masked-and-gloved waiter who was the one who packed up our order in a big white paper bag.

HOW IT'S GOING: There were a few dine-in customers even that early on a holiday weekend night.

WHAT WE GOT: Bratwurst (normally $8, $4.44 on "Sausage Party Monday"), topped with house kraut and brown mustard. We've praised Fassler Hall's sausage options in the past, not surprising since it is first and foremost a beer hall and they would probably not be able to hold up their collective heads if they made lousy brats. This one was as good as usual, and at something close to half-price, we should have ordered two. The brat is firm and tasty, and the kraut and mustard are flavor complements, not competitors.

HOW IT WENT: The dining room is open, but we placed our order by phone and paid for it on the spot. Front-of-house staff was masked but not gloved.

HOW IT'S GOING: Even at midafternoon on a weekend, there were a couple of occupied tables, at which people with food in front of them had shed their masks.

WHAT WE GOT: Mongolian Beef lunch special ($7.50), including entree, fried rice, egg roll and crab Rangoon, and pan-fried dumplings ($5.95). Mr. Hui's is part of the mini-chain that includes Mr. Chen's, part of an Asian grocery store in southwest Little Rock, and Mr. Cheng's, on East McCain Boulevard in North Little Rock, with essentially identical menus. Our Mongolian Beef was tangy and just spicy enough to enlighten our tongue without inflaming it, with enough onions and scallions for flavor but not enough for us to think we were paying for onions and scallions and not beef. The fried rice was ordinary; the egg roll and crab Rangoon (the latter, of course, sans crab) had in transit gotten soggy with the sauce from the Mongolian Beef, a frequent and not unexpected hazard. The menu said we should have gotten eight fried dumplings; we got 10, and we're not complaining. The dumplings were pan-fried crisp with a little vegetable matter inside as well as the ground pork.

HOW IT WENT: The restaurant is takeout only. We placed and paid for our order online. We had originally wanted the House Tofu ($8.95), but a couple of minutes after we ordered a staff member called and told us the kitchen was out of tofu. So we settled on the lunch special instead, and were not displeased by the outcome.

HOW IT'S GOING: One other customer was placing an order as we came and went in the middle of a lunch hour.