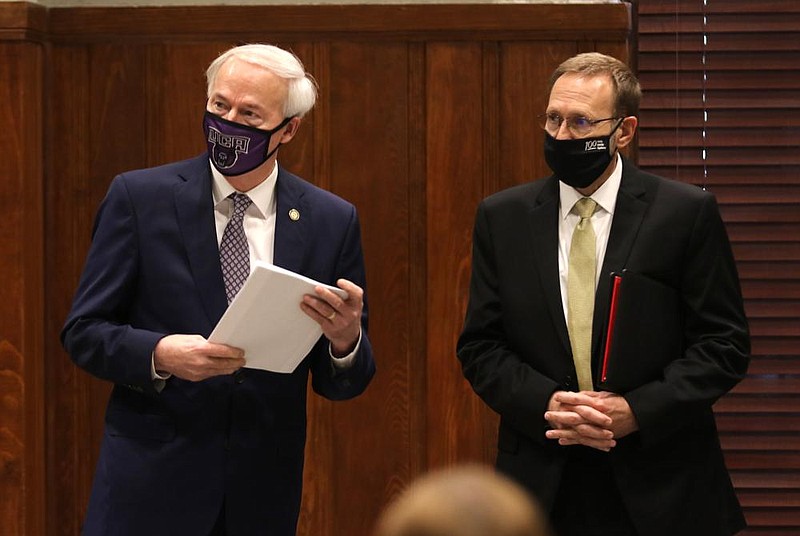 Gov. Asa Hutchinson said Wednesday that the need for a statewide mask requirement in Arkansas "will continue to be evaluated" as the state's count of coronavirus cases increased by 564, raising the total to more than 30,000.

"Yes, there's a lot that are saying we need a statewide mandate," the Republican governor said. "There's a lot that's saying that's an infringement on freedom. The next thing they will say is it's unenforceable."

In defending Arkansas' lack of a requirement, Hutchinson has said that most states don't have one.

On Wednesday, however, Alabama Gov. Kay Ivey, a Republican, issued an order requiring people in her state to wear masks while in public and in close contact with other people. Montana Gov. Steve Bullock, a Democrat, later issued a similar order for his state.

According to a count by the news website Axios, that made Montana the 26th state to require people to wear masks in public. Washington, D.C., also has a mask requirement.

Walmart and Kroger also announced Wednesday that they will require customers to wear masks, with Walmart's requirement taking effect Monday and Kroger's starting next Wednesday.

Hutchinson said a mask requirement "remains a tool that we can implement as we need it."

"We're making enormous progress in terms of our education, our usage effort," he said. "I think the fact that Walmart went that direction of requiring it with not just the employees but also the patrons and customers, I think that indicates that they're seeing the education effort work very well, where it's more acceptable in the public.

"So we're moving in the right direction. As to whether we need a statewide mandate, that will continue to be evaluated, and if we do it, you'll know about it."

[Video not showing up above? Click here to watch » https://www.youtube.com/watch?v=wtrgrYdejyk]

The state has had 30,297 cases of the virus since March 11. Of those, 6,439 were active on Wednesday. Most of the overall total have recovered, but some died.

The state's death toll from the virus, as tracked by the state Department of Health, increased on Wednesday by four, to 335, while the number of patients hospitalized with covid-19 increased by 13, to 458.

Ninety-four of the patients were on ventilators, up from 91 a day earlier.

Among those who have called for a statewide mask requirement is University of Arkansas for Medical Sciences Chancellor Cam Patterson, who indicated on Arkansas PBS' "Arkansas Week" on Friday that the lack of a uniform requirement has created confusion.

Hutchinson has said a statewide mandate wouldn't be appropriate, noting that some of the state's 75 counties have few active cases.

At his daily news conference on the pandemic, held Wednesday at the University of Central Arkansas in Conway, Hutchinson also said he didn't understand why the U.S. Department of Health and Human Services had directed hospitals to start sending data on hospital capacity and coronavirus patients to a federal contractor working for that agency instead of to the U.S. Centers for Disease Control and Prevention.

"My reaction to that is that, why did that happen? What was the necessity for it?" Hutchinson said.

"We had a system here that works very well, so I don't really understand all the reasons for it," he said. "But we've had a lot of support [from the federal government], from the supply of material, [personal protective equipment] as well as reagents, and so we're in a position that we need to comply to make sure that we continue to get that supply of materials that we desperately need."

Health Secretary Nate Smith said he hopes the CDC will continue to have access to the data.

He noted that the CDC had been collecting the information through a system designed for reporting data on infections that happen inside hospitals.

"If this gets the data more quickly to where it's actionable, then I have no objection to it," Smith said. "But it is important that all those who need to be looking at those data have access to it and can have input on it."

Health Department spokeswoman Danyelle McNeill said the department is "working with the hospital association and also with the new data collection process."

"We will still receive the same data that we have been receiving," she said in an email. "All of the data we receive regarding hospitalizations, etc. already comes directly from the hospitals putting in their own data."

U.S. Rep. French Hill, who appeared with Hutchinson at the news conference, said he's "committed to pressing the vice president for answers" on increasing the supply of reagents that laboratories use to perform coronavirus tests.

On Monday, Hill, a Republican from Little Rock, and the other five members of the state's congressional delegation sent a letter to Vice President Mike Pence saying that a shortage of the materials had caused Arkansas to consider lifting its requirement for hospitals to test patients for the coronavirus before performing elective procedures on them.

They said a reference lab, identified by a spokesman for Hill as American Esoteric Laboratories in Memphis, had canceled its contracts with many of the state's hospitals to perform the tests.

"We know specifically that CHI St. Vincent and Baptist [Health] have been affected, but were told that there are a number of other Arkansas hospitals that use this lab as well," the spokesman, Jeff Naft, said in an email Tuesday.

In a statement Wednesday, CHI St. Vincent said it "and many other healthcare providers were given 30-days notice for the cancellation of our contract with one of our COVID-19 testing vendors citing supply and capacity limitations. Our healing ministry has already secured additional vendors and is reviewing alternative resources to meet our testing needs."

"CHI St. Vincent does not anticipate this change will in any way affect our ability to support our patients and remains confident that we can continue to meet testing guidelines as put forth by the Arkansas Department of Health."

Baptist Health has "current contracts with several reference labs, one of which is AEL in Memphis," spokeswoman Cara Wade said in an email.

"All of these are experiencing greater delays in turnaround time," Wade said.

"As with many other healthcare providers in the state, Baptist Health has had challenges dealing with the shortage of reagents and testing supplies since the beginning of the pandemic. Sufficient reagent and supplies would greatly improve turnaround time for patients.

"Consistent with the letter, the pre-operative testing requirement has been a challenge and there have been times that patients' surgical procedures have been delayed."

Also on Wednesday, a spokesman for the state Department of Education's Division of Elementary and Secondary Education said the division will assemble 2,000 kits with equipment that schools can use to screen employees for coronavirus symptoms.

Each kit will include an infrared thermometer, 50 "patient care" gloves, 50 disposable masks, a guidance document and log sheet, the spokeswoman, Kimberly Mundell, said in an email.

The division will spend $113,000 in federal Medicaid funds on the equipment and prepare one kit for every 50 school employees, Mundell said. She said it is also spending $425,000 to buy 275 GenEon Technology electrostatic foggers, along with a starter kit of solution for each one, that schools can use to disinfect buildings and buses.

The foggers and kits will be provided to education service cooperatives, which will distribute them to schools, Mundell said.

She said the division expects to receive the kits and devices by Aug. 15.

Meanwhile, the Arkansas Education Association released the results of an online survey of 6,140 people, including 5,432 of the state's more than 30,000 teachers. The respondents also included 310 support staff members, 61 retirees and 337 others who were surveyed July 7 through Sunday.

Almost 57% of the respondents said they opposed returning to in-school instruction this fall, with 26% saying they supported it and 17% saying they were neutral on the issue.

Nearly 98% said it would be very or somewhat difficult to implement social distancing and take other public health precautions inside schools.

Almost 7% said they were leaving their jobs in public education as a result of the pandemic, including just over half of those respondents who said they were retiring earlier than they originally planned.

An additional 41% said they were considering leaving their jobs, such as by retiring early.

The teachers union said it had formed a "Return to Learn" committee that is analyzing the survey results and health guidance and will create a "list of expectations that must be met before students and educators can return to the classroom."

"The message from the vast majority of responding Arkansas educators is clear: we must assure the health and safety of students and educators before our schools are ready to reopen," union President Carol Fleming said in a news release.

"We need supplies, support and clearly communicated safety protocols before our students, teachers and education support staff can consider returning to in-person learning."

Hutchinson, who has called for schools to reopen to in-classroom instruction as early as Aug. 24 and no later than Aug. 26, said he hadn't seen the survey, but he encouraged people to look at the schools' plans for reopening and guidance from the Education Department.

"I think it's natural that whenever people look at the future and there's any uncertainty, they get nervous about it," Hutchinson said.

He added, "If we continue to make progress on the cases, that's going to increase the comfort level as well. If it goes up, they'll get more nervous."

The cases added to the state's total on Wednesday included 78 in Pulaski County, 52 in Sebastian County, 46 in Washington County and 38 in Benton County.

Smith said the state's count of cases among prison or jail inmates increased by 78. Such increases can reflect new cases as well as ones that were added to the statewide total earlier but that weren't immediately classified as coming from a correctional facility.

At the Ouachita River Unit in Malvern, the number of inmates who were listed in a Health Department report as having tested positive increased by 66, to 1,228.

The department's count of cases also increased by one, to 11, among patients at the Arkansas State Hospital in Little Rock, and by four, to 88, among residents at the Conway Human Development Center, which houses people with developmental disabilities.

Despite the new cases added to the statewide total, the number of cases that were considered active fell by 119, to 6,439, as 679 people were newly classified as having recovered.

A chart from the Health Department showed that an average of just over 10% of the coronavirus tests in the state were positive over a seven-day period ending Tuesday.

Hutchinson often says he wants to keep the number below 10%. 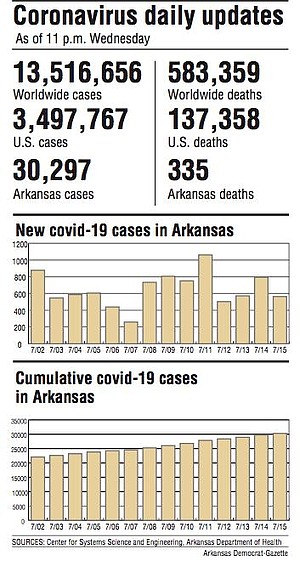