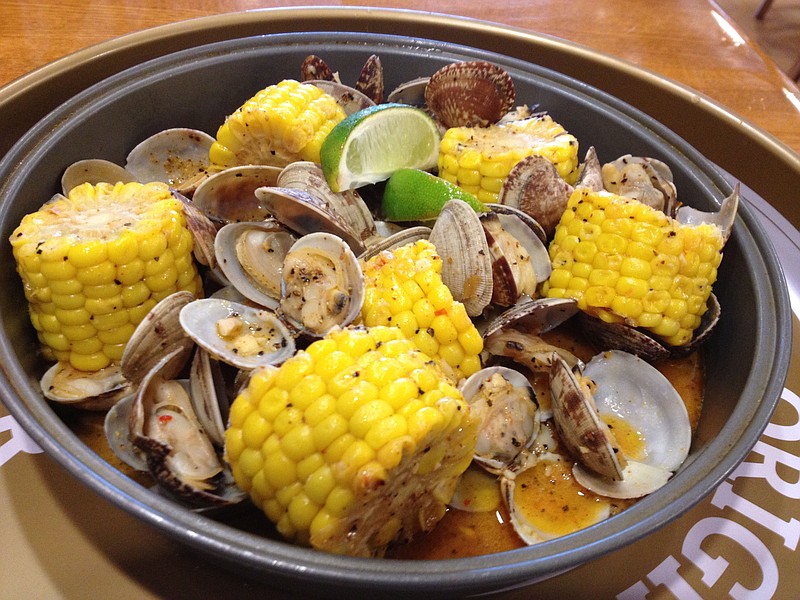 A second location of Lulu's Seafood Kitchen is on the cusp on West Markham Street near its confluence with Chenal Parkway. (Democrat-Gazette file photo)

Cypress Social, a new restaurant/bar on the former Cock of the Walk campus, 7103 Cock of the Walk Drive off Maumelle Boulevard near the point at which North Little Rock meets Maumelle, is in the home stretch, says Jim Keet of JTJ Restaurants LLC, which also owns and operates Petit & Keet and Arkansas Taziki's outlets. A late change to the lake (that could involve the waterfall feature we've been promised), Keet says, has pushed the soft opening back to Aug. 10 and the public opening to Aug. 17, which will also provide for staff training. As of right now, plans are to open the bar at 4 p.m. and the dining room at 5, Tuesday-Saturday, with the bar closing at 11 Tuesday-Thursday and midnight Friday-Saturday; and the kitchen closing an hour before that. The possibility of opening on Mondays awaits some focus-group research; Keet says they'll hold off on the possibility of Sunday brunch until churches are back to opening at full capacity — which is, he says, also what's holding up the return of Sunday brunch to Petit & Keet.

Keet has said they've completely rebuilt "the entire facility from roof to the ground. It will be a brand new restaurant with an iconic look from the past," to include a multilevel bar extension and new multitier patio/deck on the lake side." Petit & Keet general manager Brent Lenners has been heading up the project, which has retained "a lot of the natural cypress" from Cock of the Walk — hence the name. Expect the menu to offer seafood and "exceptional steaks that we cut ourselves."

Owner-operator Devin Marcel says he has "changed things up in the middle of the project" in his plans to open Central Arkansas' first outlet of Atlanta-based Original Hot Dog Factory chain. He has abandoned plans for his original location 400 N. Bowman Road, Little Rock (originally the location of the west Little Rock branch of The Faded Rose, and several restaurants since, most recently Chano's Mexican Grill), and has signed a lease in the new construction at 1424 Main St., in downtown Little Rock's South Main neighborhood. He's now looking at an October target to open there. Check out the menu at theoriginalhotdogfactory.com.

Brood & Barley has fully opened with its entire menu at 411 Main St., North Little Rock, but there's a catch: They are not doing to-go orders. At all. So if you want to try the Beer Cheese Fondue with sauteed garlic butter pretzel dumplings, chef (and Philadelphia transplant) Brayan McFadden's "Legit Cheesesteak" or one of his preparations of mussels, you'll have to eat them there. Hours are 4-10 p.m. Monday-Saturday. The state Health Department regulations, including the wearing of masks, are in force; reservations are strongly encouraged, but not required. Call (501) 400-8967; the Facebook page is facebook.com/BroodAndBarley.

Confirmation that Franke's Cafeteria won't be reopening, or at least not the Franke's we knew: A sign above the space in the Market Place Shopping Center, 11211 N. Rodney Parham Road, Little Rock, announcing that the space is available, with a phone number for the real estate company.

Owners of seven South Main Street establishments have gotten approval from the City of Little Rock for a SoMa temporary Entertainment District, on Main Street between 12th and 17th streets. so customers — 21 and older, of course — can carry alcoholic beverages from the various eateries to the SoMa Outdoor Dining Room, on the parking lot at 13th and Main. The Downtown Little Rock Partnership is organizing a grand opening celebration, 5-10 p.m. Friday. Jazzman Rodney Block and his band will play from 7:30-9:30. The tent will be open all evening for dining. Customers can order food and drinks to-go from any of the seven participating establishments: The Root, Mockingbird Bar and Tacos, Raduno Brick Oven & Barroom, Esters, South on Main, Community Bakery and Loblolly Creamery. The outdoor dining room is normally open 11 a.m.-8 p.m. Tuesday-Sunday. It's considered an expansion of the River Market Entertainment District, which operates along President Clinton Avenue and one block south, from Rock Street to River Market Avenue. Guests must maintain a 6-foot distance between groups and wear masks except when actively eating or drinking; those looking to take alcohol outside of the point of purchase and into public spaces are required to wear a wristband, all beverages must be in official entertainment district cups and folks cannot take beverages from one bar or restaurant into another, though you can carry your empty district cup; you can't bring outside alcohol in, and you can't take booze you buy there outside the district borders.

Meanwhile, North Little Rock also has a new entertainment district: The downtown Argenta Outdoor Dining District, 10 a.m.-10 p.m. daily on Main Street from Eighth Street to Broadway, Fourth Street from Maple to Poplar, and Argenta Plaza, which the North Little Rock Convention & Visitors Bureau has the option to include or exclude due to private or special events. Most of the restaurants in the district are participating, including Brood & Barley and, when it reopens, Four Quarter Bar.

Meanwhile, North Little Rockers can attend the North Shore Festival Food to Go, 11 a.m.-9 p.m. Friday, 11 a.m.-9 p.m. Saturday and 11 a.m.-7 p.m. Sunday, at North Shore Riverwalk Park, 250 S. Locust St., North Little Rock. A variety of carnival food vendors will be on hand offering options "made famous" at the Arkansas State Fair and on the "Carnival Eats" television show. All food will be to-go only. Social distancing will be the order of the weekend. Call (501) 906-6300.

The Filling Station Eats & Treats, a food truck court, has opened on the site of a former gas station at 3623 John F. Kennedy Blvd. at G Street, North Little Rock. Up to four food trucks will be parked there, 10 a.m.-6 p.m. Sunday, 10 a.m.-8 p.m. Monday and Thursday, 10 a.m.-9 p.m. Friday-Saturday (yes, they're closed Tuesday-Wednesday), plus they'll have space for for fresh local produce — fresh watermelons were flying off the shelves on Monday, we're told — and other vendors selling products ranging from salsas and masks to taffy and T-shirts, frozen treats, artisanal jewelry and honey. Call (501) 246-9750, email thefillingstationnlr@gmail.com or visit the Facebook page, facebook.com/thefillingstationNLR.

The vendors so far have included The Croissanterie, a pastry project run out of a shared Little Rock commercial kitchen, which has been selling out of plain and chocolate croissants and Cruffins, which chefs Wendy Schay and Jill McDonald explain are "leftover croissant dough baked in a muffin tin and tossed with cinnamon sugar." AY Magazine reports they're working on building their own food truck, which would presumably park, at least part of the time, at The Filling Station. Expect it to be on the road by late August or early September, the magazine says.

And while we're on Park Hill, North Bar 2.0, which we reported moved into the larger dining room at 3828 John F. Kennedy Blvd., switching places with the former Newfangled Love Kitchen, now branded as North Bar Natural, has gone back to curbside pickup only, according to its Facebook page, facebook.com/501northbar. The reason: "Due to the amount of people not complying with the regulations put forth." A member of management explains that their chief goal is to keep employees and their families safe. The phone number is (501) 420-1117; the website, 501northbar.com.

Meanwhile, North Bar Natural posted Tuesday on its Facebook page (facebook.com/northbarnatural) that it was closing permanently. "We are no longer willing to make ends meet with two restaurants in a pandemic and chose the path of least resistance," the post said. Plans are to eventually merge its vegan items into the North Bar menu.

Jacob Chi says the covid-19 crisis is a determining factor in setting a specific date for the second location of Lulu's Seafood Kitchen, in the former La Madeleine Country Fresh Cafe, 12210 W. Markham St., Little Rock, in front of which stretches an "opening soon" banner. When it does open, he says, it will be for curbside pickup and delivery. The original location, 5911 R St. in Little Rock's Pulaski Heights, is open and observing the state Health Department’s Phase 2 protocols, operating at 66% of capacity, and with limited outdoor seating. Keep track via the Facebook page, facebook.com/luluscrabboil, and the website, lulusseafoodkitchen.com.

An outlet of the Overland Park, Kan.-based Smallcakes Cupcakery and Creamery franchise-chain has opened at 13220 Crystal Hill Road, North Little Rock, a strip center opposite Walmart, selling cupcakes, ice cream flavors and combinations thereof. Hours are 10 a.m.-8 p.m. Monday-Saturday. The phone number is (501) 771-1533; the website, smallcakescupcakery.com; and the Facebook page, facebook.com/Smallcakes-Maumelle-100828428317382. There are also outlets in Bryant and Pine Bluff and one is headed for Benton.

And KrabKingz Seafood is open at 1018 Oak St., Conway, serving crab and lobster combo plates with corn and potatoes, in a similar manner to The Mighty Crab, Juicy Seafood and Lulu's Seafood Kitchen. Hours are 3-9 p.m. Monday-Friday, 11 a.m.-9 p.m. Saturday, noon-6 p.m. Sunday. The phone number is (501) 358-4455; the website, krabkingzar.com, is still a work in progress — we got a message, "Sorry, we're doing some work on the site," when we tried to call it up. The Facebook page is facebook.com/krabkingzar.

CORRECTION: The dining room at Lulu’s Seafood Kitchen EH, 5911 R St. in Little Rock, is open and observing the state Health Department’s Phase 2 protocols, operating at 66% of capacity, and with limited outdoor seating. An earlier version of this story incorrectly reported its status.