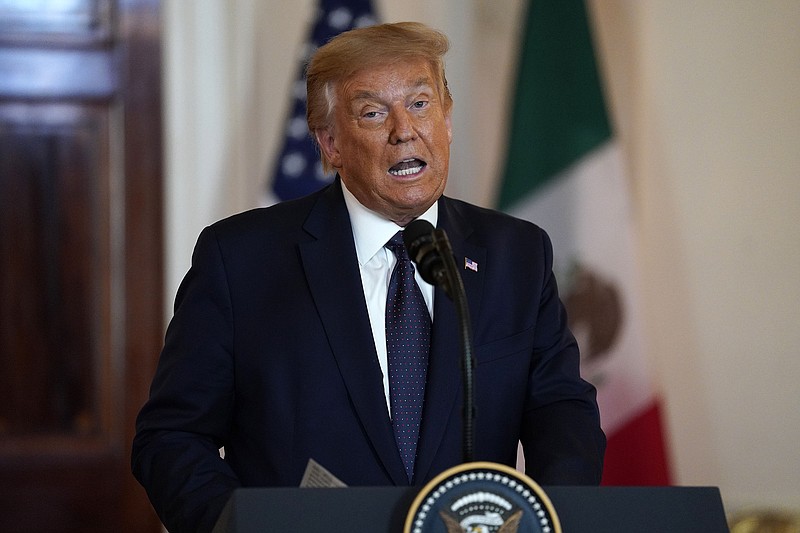 President Donald Trump delivers a statement before a dinner at the White House, Wednesday, July 8, 2020, in Washington. (AP Photo/Evan Vucci)

Days after the U.S. Supreme Court cleared the way for the Manhattan, N.Y., district attorney to seek the president's tax returns, Donald Trump's lawyers on Wednesday renewed their efforts to block or at least narrow access to the records.

Trump's lawyers wrote to the federal judge in Manhattan who originally presided over the case, saying they planned to argue that the district attorney's subpoena seeking eight years of Trump's corporate and personal tax returns was too broad and politically motivated.

The filing came less than a week after the Supreme Court rejected Trump's previous argument that the subpoena was invalid because a sitting president could not be criminally investigated.

In the new filing, Trump's lawyers noted that the high court's decision allowed him to raise other objections -- that the subpoena was "motivated by a desire to harass or is conducted in bad faith" and that it would impede his constitutional duties.

"The President intends to raise some or all of these arguments," the lawyers wrote.

The president and the district attorney, Cyrus Vance, a Democrat, have been locked in a battle over the records for almost a year.

Trump fought the request for his financial records, arguing that presidents were immune from state criminal investigations.

Last Thursday, the Supreme Court rejected his position by a 7-2 vote, but it left open the possibility that he could raise new arguments against Vance's subpoena in the lower court.

No matter who ultimately wins the battle, it is unlikely that Trump's financial records will become public anytime soon. If they are turned over to prosecutors, they will remain shielded under grand jury secrecy and may emerge only if charges are filed and they are introduced as evidence at a trial.

The flurry of legal activity over how quickly Vance would be able to access some or all of the records -- and to what extent Trump could block them -- came after the lower-court judge, Victor Marrero, asked both sides to inform him of whether further action was needed in light of the Supreme Court's decision.

In a response Wednesday, Trump's lawyers said they planned to argue that the subpoena should be blocked, while Vance's office told the judge that the issues had largely been decided. The two sides wrote to the judge in a joint letter outlining their positions.

Marrero is set to hold a hearing today to discuss a schedule for further arguments. He is not expected to immediately rule on the merits of either side's position on the subpoena itself.

In October, Marrero in a 75-page opinion rejected Trump's initial argument that he was immune from all investigation, calling it "repugnant to the nation's governmental structure and constitutional values."

After a federal appeals court panel unanimously upheld the judge's decision, the president sought review in the Supreme Court.

After the Supreme Court decision was announced last week, Vance in a statement called the ruling "a tremendous victory for our nation's system of justice." He said his office's investigation, which had been delayed for almost a year by the president's legal challenge, would resume.

The president's lawyers did not offer much detail about the grounds for their new objections in the filing Wednesday, but they said they were likely to pursue several arguments about the subpoena's scope and purpose.

Vance's office made clear that it intended to push back against Trump's position. Citing Marrero's opinion in October, it argued that he had found "no demonstrated bad faith" or harassment in the decision to issue the grand jury subpoena.

Vance's prosecutors also said Marrero had rejected the president's claim that there was "any evidence of a 'secondary motive' that goes beyond good-faith enforcement of the criminal laws."

The dispute emerged out of the case of Cohen, who paid Daniels $130,000 to buy her silence. He later pleaded guilty to federal campaign finance violations for his role in that deal and the hush-money payment for McDougal.

Cohen, who is serving a three-year sentence at a federal prison in Otisville, N.Y., implicated the president, saying in court that he had acted on Trump's orders.

Lawyers for Vance also objected to a request from Trump's lawyers that they be entitled to gather new evidence before the subpoenas are enforced and that nothing occur until the Supreme Court issues a mandate.

In Wednesday's letter, Vance's lawyers also expressed confidence after the Supreme Court victory, saying they could enforce the subpoena immediately but were holding off, "provided the appropriate schedule moves on an expedited basis."

Vance's attorney Carey Dunne also asked the Supreme Court on Wednesday to formally issue a certified copy of its decision to the lower court so Trump's lawyers cannot argue that everyone must wait another three weeks before proceeding.

Dunne said issues could arise in the "near future" concerning the applicable statutes of limitations if proceedings are delayed, potentially giving Trump "the absolutely temporary immunity" that the Supreme Court rejected. He also said further delay could result in the fading of memories by witnesses and the loss or disappearance of documents.

In light of those concerns, Vance's office asked the judge to order Trump to file any additional arguments quickly.

"If the president has anything left to say," Vance's office wrote, "the ball is now in his court."

After federal prosecutors concluded their investigation last year, Vance's office began examining whether New York laws had been broken when Trump and his company, the Trump Organization, reimbursed Cohen. The subpoena was issued as part of that inquiry.

Separately, congressional Democrats are pressing ahead with their efforts to obtain Trump's tax returns and other personal financial information after the Supreme Court, in conjunction with its ruling in the Vance case, ordered a hold on the subpoenas issued by House lawmakers.

Those cases were sent back to the lower courts for further examination, and House lawyers this week requested an expedited transfer.

Information for this article was contributed by William K. Rashbaum and Benjamin Weiser of The New York Times; by Shayna Jacobs of The Washington Post; and by Larry Neumeister and Mark Sherman of The Associated Press.