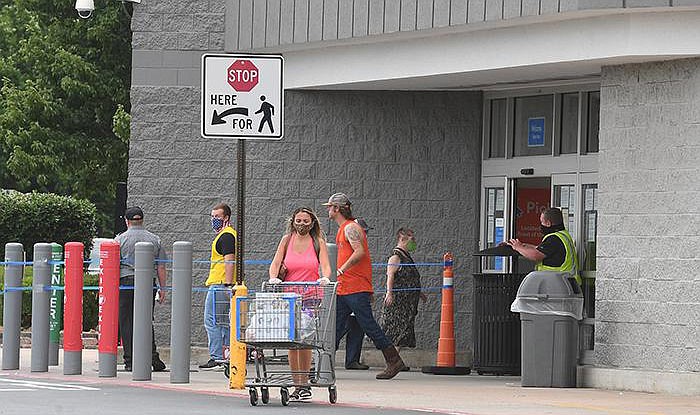 Customers, most wearing masks, enter and exit a Walmart Supercenter in Fayetteville on Wednesday. Starting Monday, all Walmart stores will have health ambassadors stationed at the doors to make sure shoppers wear masks. (NWA Democrat-Gazette/J.T. Wampler)

Walmart Inc. will require customers at all its stores and Sam's Club warehouses to wear face coverings starting Monday in an attempt to help slow the spread of coronavirus.

The new policy was announced just days after Walmart said that it was stationing "health ambassadors" at store entrances to turn away anyone not wearing a mask where mandated by state or local laws.

Both the Centers for Disease Control and Prevention and the World Health Organization recommend wearing face coverings in public settings where it's difficult to practice physical distancing. Numerous studies indicate the masks can greatly reduce the transmission of the coronavirus.

Walmart has required employees at all its stores, clubs and warehouses to wear face masks or coverings since April 20. Customers have previously been encouraged to wear them, but not required to except where mandated by state or local governments. Many local governments, and states, have been reluctant to require the wearing of masks in public.

Smith and de la Rosa said the company will spend the next few days informing customers of the coming policy change, posting signs and training employees on the new protocols.

All Walmart stores will have health ambassadors stationed outside. In announcing the newly created positions Friday, Walmart said their role is to remind people entering the store to wear masks and to turn away those who try to enter without one.

Health ambassadors will wear black polo shirts to be easily identifiable. Because they are outdoors and standing while on duty, each store will have a team of ambassadors scheduled in short shifts so they can rotate in and out of the store.

[Video not showing up above? Click here to watch » https://www.youtube.com/watch?v=yu4cgac_gnQ]

Sam's Club, Walmart's members-only warehouse division, will not have health ambassadors, but stores will have employees stationed at the door to perform the same function.

Bentonville-based Walmart said that it will make exceptions for customers unable to wear a mask because of a health condition and will not press them for details.

"We know there will be people unable to wear a mask in the stores for health, religious or other reasons," de la Rosa and Smith said. "For others, we will have multiple options for them to get and wear a mask."

Mask mandates have become a hot-button issue for some. Customers inside businesses around the country, including Walmart stores, occasionally become belligerent and even violent when asked to wear them.

If a customer refuses to wear a mask, Smith and de la Rosa said, "our goal is to keep our associates from a physical confrontation situation."

Walmart did not address questions about how the policy will be enforced, or how employees are being trained to handle customers angry about being turned away for refusing to wear a face covering.

But the company has previously said store employees regularly receive training in de-escalation techniques and other safety measures. Store managers also work with local law enforcement regarding how best to partner with them in those situations, and Walmart has asked their contracted security guards at some stores to help if needed.

However, Smith and de la Rosa said that in most places where face coverings are required, "virtually everyone either brings a mask or readily complies with the requirement and we anticipate that to happen in other areas as well."

"We believe this requirement will result in many more people wearing masks in our stores and clubs than before and that's ultimately what we are aiming for," they added.

Several retailers already require customers to wear masks at all their locations, including BJ's Wholesale Club, Apple Inc. and Panera Bread Co. Costco Wholesale Corp. has done so since May, a decision that spurred a boycott against the company. On Wednesday, Best Buy Co. and Starbucks Corp. became the latest to implement a universal mask-wearing policy.

Hours after Walmart's announcement Wednesday, supermarket giant Kroger Co. said in a policy statement that it will follow suit beginning next Wednesday.

"We are taking this extra step now because we recognize additional precautions are needed to protect our country," Kroger said in the statement.

Carol Spieckerman, a retail consultant and president of Spieckerman Retail, said Wednesday that as more retailers announce their own policies, a "safety in numbers" effect will mitigate any backlash against Walmart for doing so.

Spieckerman believes most Walmart shoppers will welcome the move and said the decision "messages a perception of safety and proactivity that should benefit Walmart's business." While there may be instances of backlash against the company, she said, but she doesn't foresee a boycott.

"The net effect on Walmart's business should be positive because Walmart is offering options that meet customers where they are literally and psychologically," Spieckerman said. "Shoppers can still load up on groceries and pick them up at the store or, in some markets, have them delivered. Those who prefer to shop in-store can now do so with greater confidence."

Also on Wednesday, the National Retail Federation encouraged all retailers to adopt a nationwide mask-wearing policy for customers.

The retail trade group said in a news release that it hoped Walmart's announcement "is a tipping point in this public health debate."

"Workers serving customers should not have to make a critical decision as to whether they should risk exposure to infection or lose their jobs because a minority of people refuse to wear masks in order to help stop the spread of the deadly coronavirus," the industry association said.

"Shopping in a store is a privilege, not a right," the group said. "If a customer refuses to adhere to store policies, they are putting employees and other customers at undue risk."