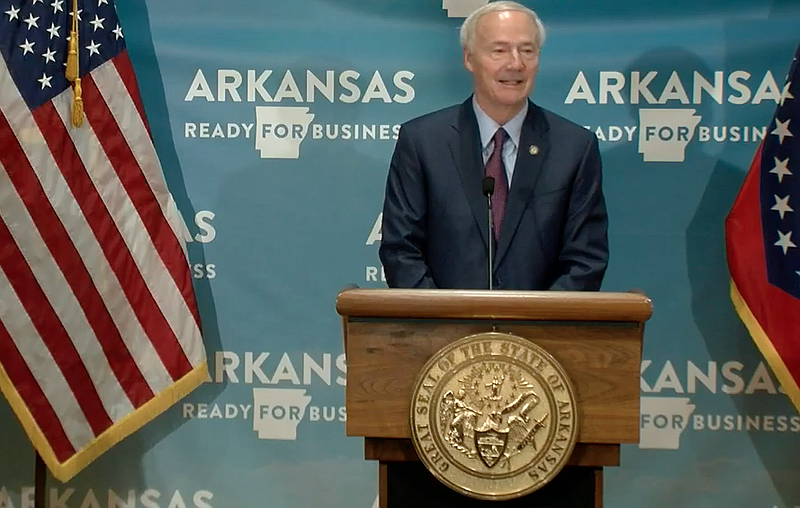 Arkansas Gov. Asa Hutchinson speaks to reporters at the state Capitol in Little Rock on Thursday in this still of video provided by the governor's office.

Gov. Asa Hutchinson announced Thursday he will issue an executive order mandating Arkansans wear face coverings in all public places where physical distancing is not possible.

The order applies to both indoor and outdoor spaces and will go into effect Monday.

The mandate carries the power of law, and violations will be misdemeanor offenses punishable by a fine between $100-500, he said, though first-time violators will be given a verbal or written warning.

Hutchinson said law enforcement cannot detain or arrest anyone due to a face covering violation, and no minors will be fined under the order.

Those excluded from the mandate include children younger than 10, people with a medical condition or disability that prevents safely wearing a face covering, and athletes participating in activities where a mask is inhibitory, among others.

Dr. Jose Romero, incoming acting Department of Health secretary, said hospitalizations climbed by 12 to 470, a new high. Seven more patients were on ventilators, for a total of 101.

Six additional Arkansans died of the virus, bringing the toll to 341. Romero said 24,195 have recovered from the virus so far.

The new cases bring the total number of active cases to 6,578, Romero said. Of those, 138 are in nursing homes, 978 are in correctional facilities and 5,465 are in the general population.

Counties with the highest numbers of new cases included Pulaski with 114, Washington with 68, Benton with 48, Sebastian with 43, Pope with 40, Yell with 26, Faulkner with 27, Arkansas with 20, Garland with 24 and Craighead with 22.

Hutchinson said results from 6,020 tests were received in the previous 24 hours.

As to why the governor decided to make masks mandatory now, Hutchinson gave several reasons. He said the number of cases, deaths and hospitalizations “speak for themselves and indicate that we need to do more.”

He said he has also listened to doctors and nurses on the front lines who are asking the public to do more to stop the spread of covid-19, and he listened to legislators who felt that even if they didn’t like the idea of a mandate, they wanted to do what is necessary to get back to normal.

Finally, Hutchinson said that if children returning to school are going to be expected to wear face masks, adults must do their part to set an example.

The governor stood by his decision to resist a mandate until now, saying the public needed time to become educated about the benefits of masks and accept them as useful or else a mandate would have been unenforceable.

He also said the public should not expect the mask order to have an immediate effect on the growth in new cases and added that other preventative measures, including social distancing, remain important.

Other individuals excluded from the face covering requirement include anyone engaged in religious worship, giving a speech, driving alone or with household members, consuming food or drink or voting.

This story was originally published at 1:51 p.m.

The total number of coronavirus cases reported in Arkansas remained at 30,297 Thursday morning, according to a state website. The death toll remained at 335.

[Video not showing up above? Click here to view » https://www.youtube.com/watch?v=Sk3NOo84PDQ]