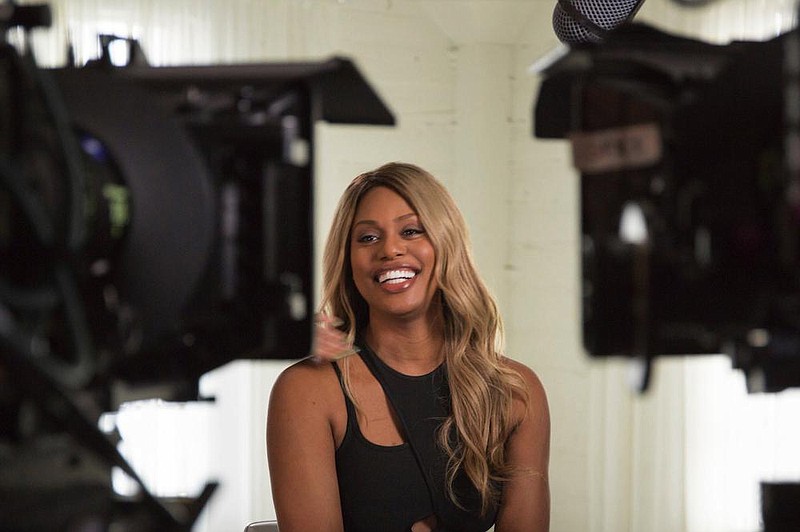 Laverne Cox, who was one of the stars of the Netflix series “Orange Is the New Black,” is the host of “Disclosure,” Sam Feder’s look at the way transgendered and nonbinary people have been represented in film, television and other media through the years.

You might think you don't need to see "Disclosure," Sam Feder's Netflix documentary about the ways transgender people are depicted (and not depicted) in movies, television shows and other media, but you probably do.

I didn't think I needed to see it and wasn't sure I wanted to. Because, after all, I'm a good-hearted person who tries to be kind and fair, and have written pretty extensively about the ways gay people are represented (and not represented) in film. I didn't really expect "Disclosure" to tell me anything I didn't know.

I didn't think it would entertain me. I was pretty certain it would depress me.

But we tuned in out of a sense of duty, just to make sure we weren't missing anything important.

And an hour and 40 minutes later, I was sorry it was over. Everyone who is interested in film history will likely enjoy this engaging and surprisingly balanced work.

"Disclosure" is obviously modeled after Rob Epstein and Jeffrey Friedman's 1995 documentary "The Celluloid Closet," which is based on the indispensable book of the same title. What "The Celluloid Closet" mostly points out is that gay and lesbian culture has been around since the beginning of human nature and is present in the movies from the very beginning, because it is present in the sensibilities of the humans who make the movies, even if it is dangerous to advertise it as such.

"Disclosure" pulls the same trick for transgendered folks, pointing out that gender-fluid characters have appeared on screen at least since D.W. Griffith made the silent "Judith of Bethulia" in 1914. As a clip from the film rolls, film historian Susan Stryker draws our attention to a peripheral character, a cross-dressing eunuch servant meant to serve as comic relief.

As Stryker explains that "Judith of Bethulia" is widely cited as the first film in which a cut is used to advance a storyline, we watch as the camera cuts away from the moment before a beheading to the cross-dressing figure and then back to the original scene, where a severed head now lies on the floor.

"The cut trans body presides over the invention of the cinematic cut," Stryker declares. "Trans and cinema have grown up together."

We now have even more reason to wonder about Griffith's pathologies.

But if film geek exegesis isn't your thing, you'll probably still find plenty fascinating in the breezy doc, hosted by "Orange Is the New Black" actor Laverne Cox, a producer on the film. (Regular readers of this section will know this, but in context it seems important to point out that we use "actor" as a gender-neutral term, and "actress" only in regard to awards categories.)

Cox remembers how growing up in Alabama, her only exposure to gender-crossing came via Flip Wilson's portrayal of his Geraldine character.

And Geraldine can be seen as part of a theatrical tradition that goes back (at least) to the Greeks; men famously played women on stage in Shakespeare's time.

It's difficult to think of a TV comic who didn't at some time put on a dress for laughs. (Though, as a fascinating clip from the Showtime series "White Famous" illustrates, when blackness and drag intersect, things get more complicated. One way to emasculate a "scary" Black man is to put him in a dress; it's almost a rite of show-biz initiation.)

Still, the range of commentators and opinions expressed keep "Disclosure" from feeling strident, as the diverse and intelligent array of talking heads contradict one another (and sometimes themselves) as they grapple with toxic depictions that have become as iconic as Anthony Perkins in "Psycho" and Michael Caine in "Dressed to Kill."

It's always difficult to apply ever-evolving contemporary standards to the past -- if the idea is that we're progressing, shouldn't we be better tomorrow than we were in the 1950s? -- but "Disclosure" is a generally gentle tonic.

I'm still not convinced that "Tootsie" and "Victor/Victoria" are all that problematic (though I was shocked by one scene from 1991's "Soapdish" that I had completely suppressed) but this is a doc that will teach you to see things you mightn't have otherwise.

And noticing is actually part of the fun of watching movies.

But yes, there is a lot of casual violence directed at trans characters in the past -- they are depicted as freaks and monsters, even by creators you might think would be more sympathetic. Even celebratory documentaries such as 1990's "Paris Is Burning" have issues.

While I don't think any of the various voices in this documentary would deny an artist the right to create whatever sort of art their heart leads them to, we all might want to think about what scares us and why and how we might be more kind, and more fair.