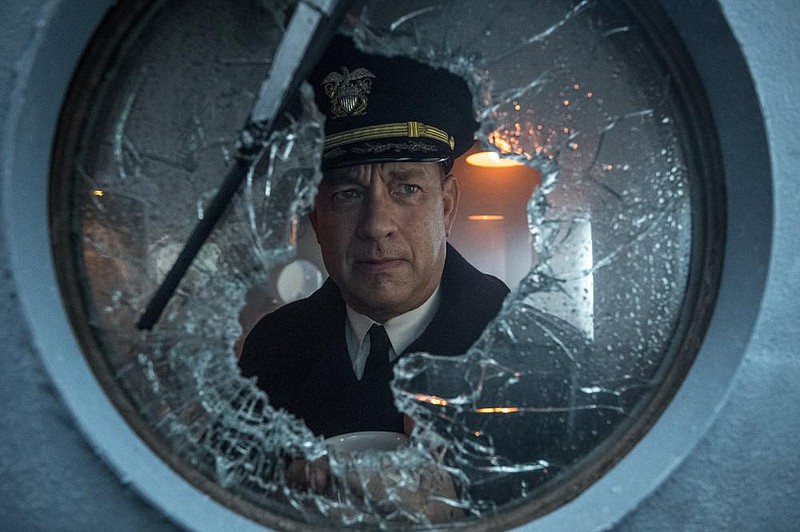 Faith and self-doubt commingle in the psyche of U.S. Navy Captain Ernest Krause (Tom Hanks), a decent man charged with enormous responsibility in “Greyhound,” a World War II action film for which Hanks wrote the screenplay.

It's great to have Tom Hanks in the world.

He presents as a reservoir of common sense and decency, the sort of man we might choose to represent our very way of life. He's a fine actor, and from all the evidence, a legitimately good person.

We should let him indulge his passions; often his pursuits prove rewarding to us all.

"Greyhound," the movie that Hanks is currently starring in and for which he wrote the screenplay, adapting the 1955 novel "The Good Shepherd" by C.S. Forester (the creator of Captain Horatio Hornblower) feels strangely old-fashioned, despite its heavy reliance on digital technology to conjure up a great gray ocean and the ships that ride on and under it.

It is sturdy story-telling, it moves along and gets clear of everything in about 90 minutes. It's a plausible drama about a nonheroic hero who does what he must and repents the harm he causes those who try to kill him.

It is set during the Battle of the Atlantic when, shortly after the United States entered World War II, the problem of getting American and Canadian troops to the European Theater of Operations was a problem. In the middle of the ocean, there was a point past which U.S.-based aircraft could not fly that was also beyond the reach of British air cover.

So for two days and two hours, Allied convoys churning across the Atlantic were left vulnerable to attacks by German U-boats.

In "Greyhound," Navy Commander Ernest Krause (Hanks) is in charge of the titular destroyer, which is escorting a convoy of troop ships through this dangerous passage. In a brief opening scene, we learn a couple of things about Krause -- he's left behind a woman who wants to wait until after he comes back from the war to marry him, and that despite his being a career naval officer, only the circumstances of the war have occasioned his promotion to commander. He's embarking on his first wartime mission. He's wondering if he's up to it.

But whatever self-doubts this devout and grounded man may have about his abilities, Krause has to appear the epitome of competence and mastery to his crew. Hanks, who despite all his accolades may yet be underrated as an actor, delicately conveys the interiority of Krause as the commander deals with squabbling subordinates and makes decisions that will save or lose lives.

This minor movie might have been better if someone could have figured a way to stage it as a play, without any of the seemingly obligatory (and admittedly technically excellent) special effects that allow us glimpses of the stalking U-boats and visions of burning tankers and the lot. There is a lot of CGI in "Greyhound," and much of the film's action involves hurtling torpedoes and explosions and the slow-motion slaloming of the destroyer through immense grayness.

It was a mistake to make this an action movie and to employ the latest and best technology in its execution, but Apple TV+ probably wanted something to make a big splash, and a Tom Hanks World War II epic probably fit the menu better than the brooding drama I'm imagining, with the enemy forever looming out of frame.

But "Greyhound" has some ballast, and you can bet that Hanks the screenwriter made sure all the naval jargon that gets thrown around is period correct and that the officers are addressed by their proper titles. Unfortunately, no other cast members can manage to beam through the prevailing gray atmosphere, not even usually magnetic Stephen Graham as Krause's second-in-command Lieutenant Commander Charlie Cole.

Rob Morgan has a brief role as the mess attendant who brings Krause coffee and frets about his commander not eating. While it's likely a historically correct portrayal, the relationship between the commander and his "servant" is freighted with dark material the movie doesn't begin to explore. Krause is a man of his time, Hanks seems to be telling us; he is no saint, no crusader.

Yet Hanks enlists our empathy with his portrayal of sober and self-doubting Krause who, we're meant to think, isn't such an extraordinary man, after all, just a product of good training and diligence, a craftsman doing his job the way any of us might had we similar experience.

Hanks looks like a regular guy too. But he can do anything. Even make a so-so movie.

Captain Ernest Krause (Tom Hanks) and members of his crew watch for German U-boats in “Greyhound,” which is streaming on Apple TV +.
ADVERTISEMENT