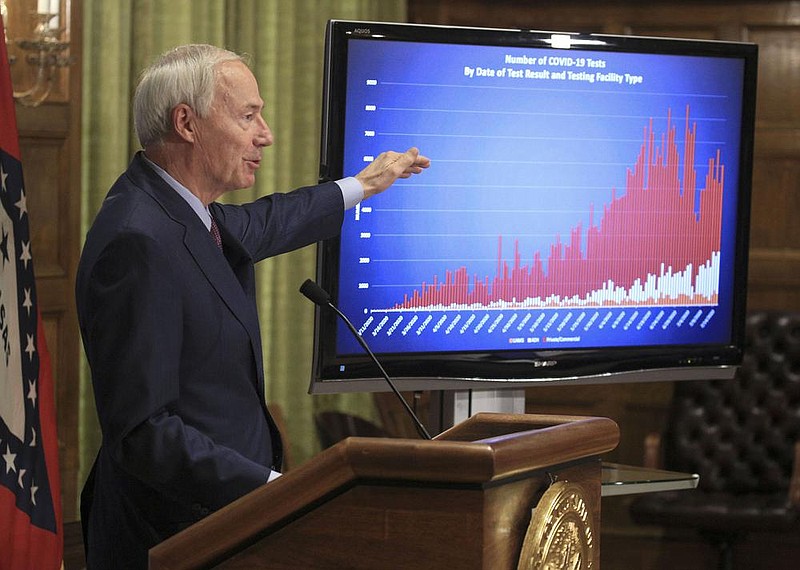 Gov. Asa Hutchinson on Thursday cited input from doctors and nurses “on the front line of this fight against covid,” as well as input from legislators as reasons he decided to take the step on masks. He also said public acceptance of wearing masks has grown. (Arkansas Democrat-Gazette/Staton Breidenthal)

Gov. Asa Hutchinson on Thursday directed the state Department of Health to issue a statewide requirement for Arkansans to wear masks in public places starting Monday.

His announcement came as the state's count of coronavirus cases rose by 817, the state's third-highest one-day increase.

The state's death toll from the virus, as tracked by the Health Department, rose by six, to 341.

"The number of covid-19 cases, hospitalizations and deaths are numbers that speak for themselves and indicate that we need to do more," Hutchinson said in announcing the mask requirement.

The number of Arkansans hospitalized with the virus rose on Thursday by 12, to 470. The number of patients who were on ventilators increased by seven, to 101.

The number of cases that were considered active rose by 139 to 6,578, as 672 Arkansans were newly classified as having recovered.

An executive order the Republican governor signed Thursday directs the Health Department to issue a directive requiring people to wear masks covering their mouth and nose in indoor environments where they are exposed to non-household members and "cannot be assured" they will be able to stay at least 6 feet away from them.

[Video not showing up above? Click here to watch » https://www.youtube.com/watch?v=Sk3NOo84PDQ]

Masks will also be required in outdoor settings "where there is exposure to non-household members, unless there exists ample space of six (6) feet or more to practice physical distancing," according to the order.

The directive will exempt, among others, children younger than 10, people with medical conditions or disabilities preventing them from wearing a mask, and people participating in athletic activities where the mask would inhibit the activity.

Law enforcement and "local officials" will be authorized and "encouraged" to enforce the directive.

Violations will be a misdemeanor punishable by a fine of $100 to $500, although first-time offenders and violators who are children will receive only a written or verbal warning.

Law enforcement and other officials will not be allowed to "detain, arrest or confine in jail any person" for violating the directive, but police can still enforce trespassing and other laws to remove violators from businesses or other locations at the request of the property owner.

"This is not about arresting anyone," Hutchinson said. "It's about education, but it's also about a penalty, and it's a consequence and so they can be issued a citation."

The directive will exempt counties where the Health Department certifies that the risk of coronavirus transmission is low.

To meet that criteria, the county must have adequate testing and no new cases for 28 days, similar to the state's criteria for allowing visits at nursing homes.

The mask directive will also exempt people who are not able to safely and effectively perform their job duties while wearing a mask; people who are eating or drinking; people driving by themselves or with passengers from their own household; and people receiving a service when removing the mask is necessary for security, surveillance or other purposes.

People giving a speech or performance to an audience or for broadcast will also be exempt, although they will be required to keep a safe distance from other people.

The directive will also exempt people engaged in religious worship activities, although they are encouraged to wear masks, according to the order.

The directive will also exempt people who are voting, assisting voters, serving as poll watchers or actively performing election administration duties, although they are also encouraged to wear masks.

Voting is "something that's a constitutional right, and so we don't want to interfere with that," Hutchinson said.

Hutchinson had defended the state's lack of a mask requirement for weeks, including after University of Arkansas for Medical Sciences Chancellor Cam Patterson called for one during an appearance on Arkansas PBS' "Arkansas Week" last week.

"I've resisted for many months a mask mandate because I don't believe that government coercion should be the first thing that you turn to," Hutchinson said Thursday.

But he said public acceptance of mask wearing has grown.

He also cited input from doctors and nurses "on the front line of this fight against covid" as well as input from legislators as reasons he decided to take the step.

"I've heard from legislators that have a of different views, but many of them simply say, 'I don't like it, but whatever it takes, let's get through this and give us the best chance for normal activities in the future,'" Hutchinson said.

He added that, when schools reopen to in-person instruction next month, "they will be required in most instances to wear face coverings."

"If you think about it, if you're going to ask the children in the school setting to wear face coverings for everyone's health and safety, then the adults must help them to be ready and to set the right example for them," Hutchinson said.

Hutchinson had previously said a statewide mandate wouldn't be appropriate, noting that some of the state's 75 counties have few active cases.

Thursday's measure allows cities and counties to issue ordinances "consistent with this order," and does not invalidate ordinances that were passed pursuant to the earlier order.

In a video on Facebook post on Thursday morning, before Hutchinson's announcement, Sen. Bob Ballinger, R-Berryville, said "it sounds like" the governor was going to issue a mask requirement next week, which Ballinger said would be "a huge overstep."

"I'm highly offended by the idea that a state government would mandate the wearing of masks in public places," he said.

He said he didn't doubt the research showing masks can be effective in preventing the spread of the virus but doesn't think the government should mandate their use.

"The truth is I think we need to start realizing that we're surrendering our constitutional rights," he said.

He said Hutchinson should call a special session of the Legislature to address the issue.

In the meantime, he said, "I think we're at a point now where I think peaceful noncompliance would be appropriate."

"If you're not in a place where you're going to make someone else sick, really you have no moral obligation to wear a mask just because the state is requiring you to do so," Ballinger said.

Along with posting the video, he wrote, "Liberty lost is is seldom reacquired without violence. It's time that citizens take control of their government."

Rep. Dan Sullivan, R-Jonesboro, also called for a special session on the issue.

"We are to the point that we are making laws, setting out the penalties for the law and the Legislature has nothing to do with it," he said.

"When you have a crisis, you have to have executive leadership, and that's why the law is structured the way that it is," Hendren said. Hutchinson is Hendren's uncle.

Hendren added that the Legislature could debate the need for changes to the law giving Hutchinson the authority to issue orders during an emergency during next year's regular legislative session.

House Speaker Matthew Shepherd, R-El Dorado, said he's "not calling for a special session," although he's open to discussing the need for one.

He said he'd prefer the mask directive not contain "enforcement language," but added that "there are a number of exemptions."

"If a person maintains the appropriate social distancing, then they may not even have to wear a mask anyway," he said.

"I wish [Hutchinson] would have done it sooner, but now is better than never," he said.

"This is the right decision and will flatten the curve and save lives in Arkansas as we fight the COVID-19 pandemic," he said on Twitter.

The cases added to the state's total on Thursday included 114 in Pulaski County, 68 in Washington County, 48 in Benton County, 43 in Sebastian County, 40 in Pope County, 27 in Faulkner County, 26 in Yell County, 24 in Garland County, 22 in Craighead County and 20 in Arkansas County.

Jose Romero, the Health Department's chief medical officer, the state's count of cases among prison or jail inmates rose by 81. Such increases can reflect new cases or ones that were added earlier but not immediately classified as coming from a correctional facility.

At the Wrightsville Unit, the number of inmates who were listed as having tested positive increased by 88, to 170.

Meanwhile the state Department of Corrections announced that two more state inmates died this week after treatment for covid-19.

The agency did not name the prisoners, but said they had been hospitalized from the East Arkansas Regional Unit and the Ouachita River Correctional Unit, both the sites of major outbreaks.

At least 17 people have died after contracting coronavirus in Arkansas prisons, according to the Health Department.

One inmate, 58-year-old Michael Wells, died Thursday morning at Baptist Health, according to a coroner's report.

The report identified Wells as a prisoner at the Tucker Unit. However, his daughter, Alena Konkel, said her father had more recently been housed at the Varner Unit and then the Ouachita River unit after a stroke in June.

The Varner and Tucker units have not had any prisoners test positive for covid-19, according to the Health Department.

Konkel said that her father was partially paralyzed by the stroke, and had been sent to the prison hospital at Ouachita River for care. He was there about a week, she said, before he returned to the hospital on July 6 and was diagnosed with covid-19. She said she was not able to speak to her father while he was at the hospital.

"I guess that's what's eating me the most," she said in a phone call Thursday. "I didn't get to say goodbye."

Wells had been in and out of prison for several years due to drug problems, Konkel said. Despite those issues, Konkel said Wells was a "loving father" who enjoyed working on cars, painting houses and playing basketball with his 14-year-old grandson.

"When he was out, he was spending time with me and his grandchildren," she said. "When he was home he was the caringest, lovingest man." 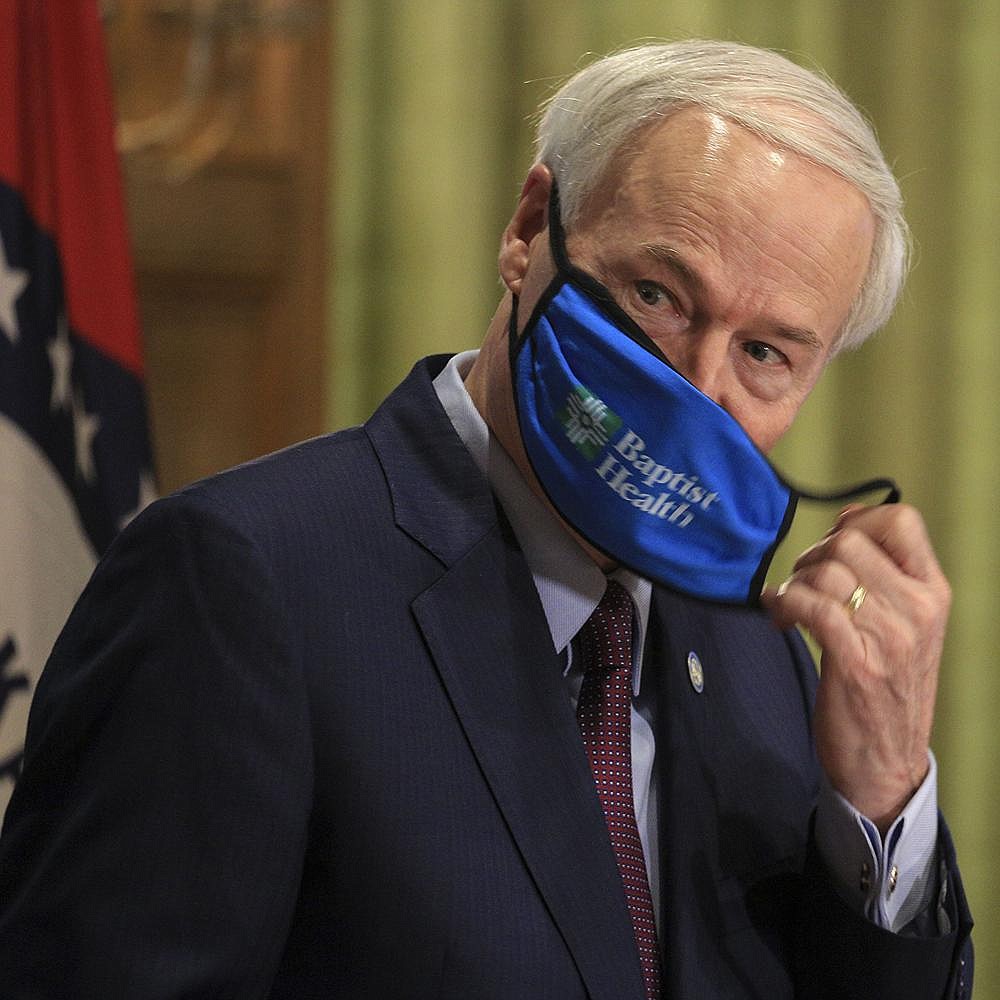 Gov. Asa Hutchinson removes his mask before Thursday’s briefing. “This is not about arresting anyone,” Hutchinson said of the mask mandate. “It’s about education, but it’s also about a penalty, and it’s a consequence, and so they can be issued a citation.” More photos at arkansasonline.com/717governor/. (Arkansas Democrat-Gazette/Staton Breidenthal) 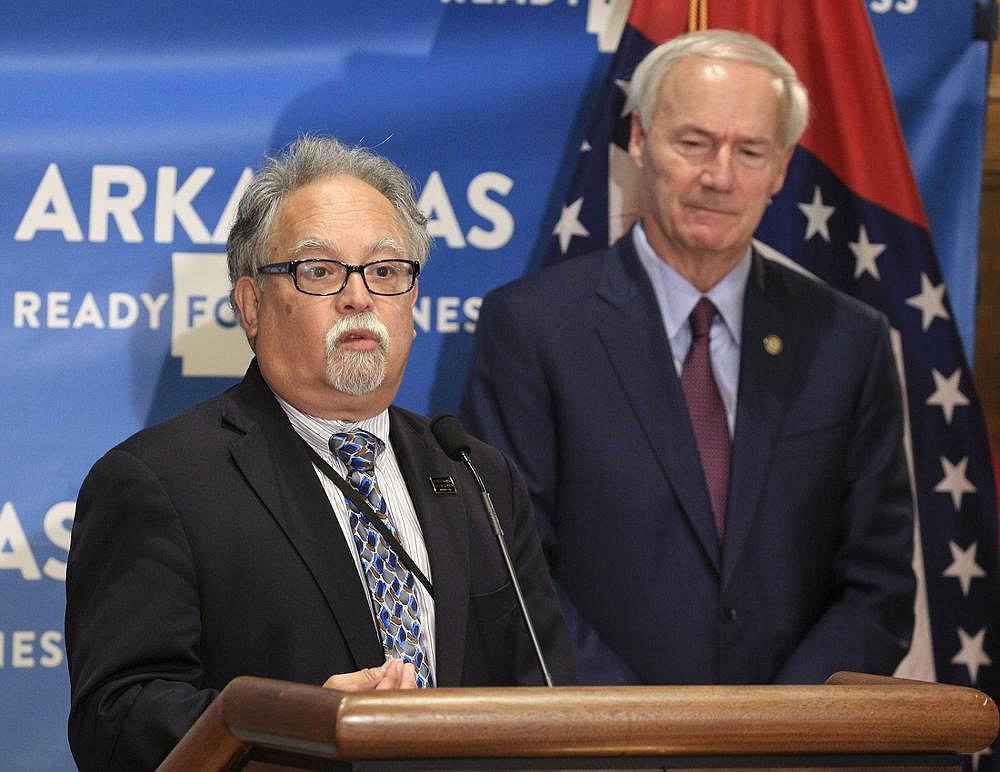 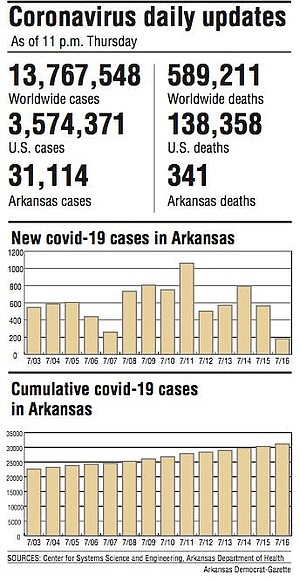