Jobless Arkansans get $1B in U.S. aid 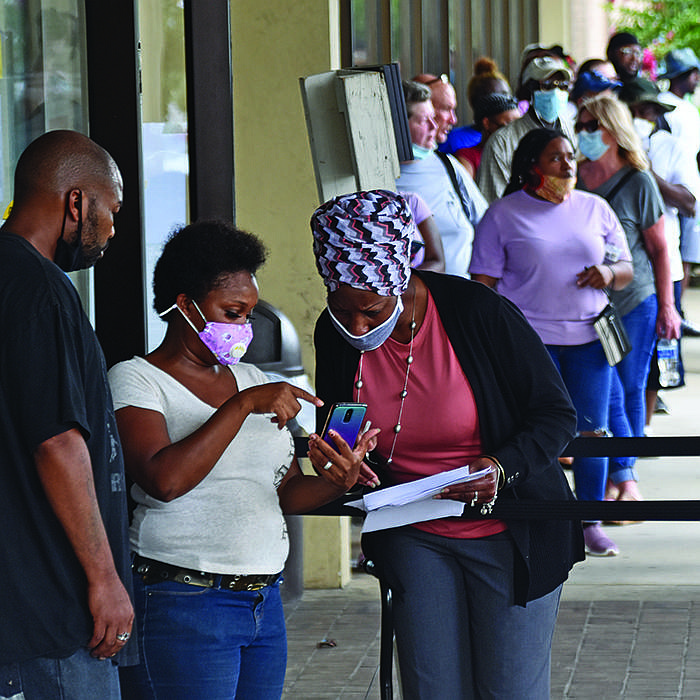 The state has disbursed more than $1.1 billion in federal unemployment aid to the jobless in just four months, including millions of dollars in weekly federal supplements that will end July 25 without an act of Congress to extend the aid.

The state also disbursed $271.3 million in weekly benefits from its unemployment insurance trust fund in just 16 weeks, according to the state Department of Commerce's Division of Workforce Services. The payout eclipsed total disbursement last year of $98.5 million in just five weeks, a Workforce Services spokeswoman said.

Given the breadth of the pandemic's economic toll, those figures aren't surprising, said Michael Pakko, chief economist and state economic forecaster at the Arkansas Economic Development Institute at the University of Arkansas at Little Rock.

"Those are some pretty interesting numbers that I'd like to know more about, but they don't strike me as being outside the range of plausible," Pakko said.

The $2.2 trillion Coronavirus Aid, Relief, and Economic Security Act, which was passed by Congress and signed into law on March 27, sent billions of dollars in aid to the unemployed, businesses, hospitals, community health centers, states and municipalities. It also provided one-time payments of up to $1,2oo for millions of Americans. The measure was the third phase of Congress' financial response this spring to the coronavirus pandemic.

Pakko said the financial relief, with its almost-immediate injection into the economy, boosted personal income in the year's second quarter. "All those programs that are helping compensate people for the shutdown and lost income are actually more than replacing the income we lost," he said.

For the unemployed and those whose hours were reduced, the act created and funded:

• The Pandemic Unemployment Assistance program, which provided benefits, for the first time, to independent contractors, the self-employed, freelancers, "gig" workers and others who typically would not qualify for regular unemployment insurance benefits. People can claim those benefits for 39 weeks or until the week ending Dec. 26, whichever comes first.

• The Federal Pandemic Unemployment Compensation program, which provides the $600 in weekly federal supplements to all unemployment insurance recipients. The supplements in Arkansas and 48 other states end July 25 and July 26 in New York.

The law also established separate extensions of 13 weeks under the Pandemic Emergency Unemployment Compensation program and then eight weeks in an extended benefits program, both of which are funded by the federal government but distributed by states.

Arkansas, according to the Workforce Services Division, has paid out just more than $1.1 billion under the Federal Pandemic Unemployment Compensation program.

Using federal money, Arkansas also has paid out $83.7 million, through July 11, to the self-employed and other independent workers. Weekly payments to those workers range from $132 to $451.

Initial claims for state unemployment benefits -- those filed for the first time by workers to win eligibility -- totaled 285,094 between the weeks ending March 21 and July 4, the most recent date for such numbers.

Congress is debating an extension of the supplement, whether at $600 or a lesser amount, as well as other possible economic-relief measures as the pandemic continues or, as in some states and cities, worsens.

The White House on Tuesday signaled that it's open to the idea, according to The Washington Post, although the amount could be cut by as much as half.

Republicans and some Democrats in Congress have said they believe the $600 supplement, when added to regular unemployment payments from states, is a disincentive to returning to work. Others contend the bonus needs to be extended as some states and cities again have begun shutting down parts of the economy with the rise in coronavirus cases.

"I have mixed feelings," Pakko said of the $600 supplement's possible revival. "On the one hand, the economy is starting to come back from the most extreme part of the shutdown, but there is still a very high number of unemployment claims we see coming in week after week," he said. "We're still seeing a lot of churning in the labor market, with a lot of people still losing their jobs and a lot of people returning to work. It's a very chaotic situation."

A possible compromise is a federal-state match on any supplement, as opposed to the flat "one size fits all" $600 weekly benefit that Congress devised in March, Pakko said. "That would scale it more to the economies of the individual states."

The drain on the state's unemployment trust fund has been unprecedented.

During the recession of 2008-2009, the trust fund ran dry in March 2009, forcing the state to take out loans from the federal government. Arkansas borrowed $360 million. Thirty-five other states also took out such loans.

The state's Unemployment Trust Fund has a balance this week of $644.7 million, down from $845 million on March 1. Payments from the fund have been partially offset by the usual flow of unemployment insurance contributions required of most employers, based on payroll taxes. Workers don't pay into the unemployment trust fund.

Arkansas' regular unemployment insurance program pays a weekly average of $233, for a maximum of 16 weeks. Weekly benefits range from $81 to $451, as set by Arkansas unemployment compensation law last modified in 2012. The $451 maximum benefit is 22nd-highest in the nation, near a midrange between Massachusetts' $823 and Mississippi's $235. The minimum weekly benefit in Arkansas is higher than that of 40 states.