12 deaths in day biggest increase so far for Arkansas 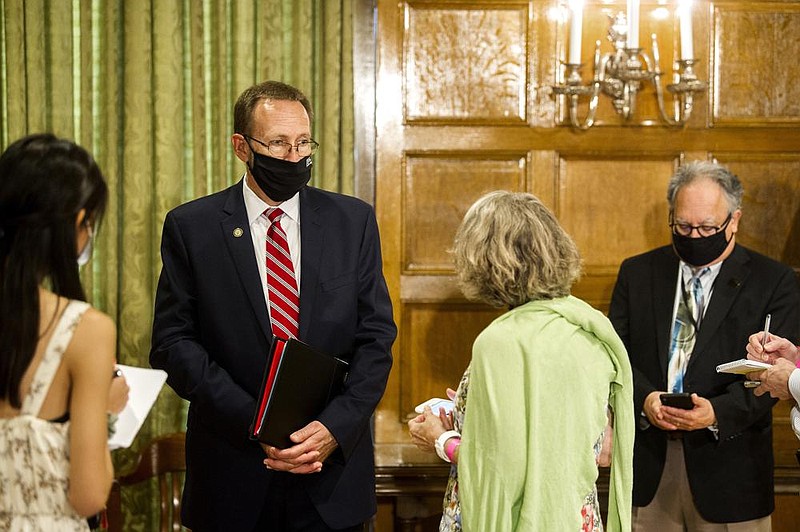 State Health Secretary Nate Smith takes questions from the media Friday at the end of his last news conference as a state official. Smith will be taking a job with the federal Centers for Disease Control and Prevention in Atlanta. (Arkansas Democrat-Gazette/Stephen Swofford)

Arkansas' count of coronavirus cases rose Friday by 648, while the death toll from the virus, as tracked by the state Department of Health, rose by 12 to 353 -- the biggest one-day increase for deaths so far.

Meanwhile, a report by the White House coronavirus task force, dated Tuesday, lists Arkansas among 18 states that are in the "red zone" for new coronavirus cases, meaning they had more than 100 cases per 100,000 residents last week, according to a report by the Center for Public Integrity, a nonprofit news organization in Washington, D.C.

In 13 "red zone" counties within the state, the White House report recommends taking steps such as closing bars and gyms, limiting social gatherings to 10 people or fewer and limiting seating in restaurants to 25% of their dining room capacity.

Gov. Asa Hutchinson said state officials have "looked at those, and we're taking those one step at a time."

While he hasn't closed the state's bars since they were allowed to reopen May 26, Hutchinson said the state has increased its enforcement of Health Department directives in bars and restaurants, including by having Alcoholic Beverage Control agents check for violations.

"That's an example of where we took the admonition and the objective and took it in a different direction that will accomplish the same thing, but will allow them to do business," Hutchinson said. "If we have to put more restrictions, we will continue to look at that."

The number of people in the state hospitalized with covid-19 fell by six, to 464. Ninety-seven of the patients were on ventilators, down from 101 a day earlier.

The state's cumulative case count increased to 31,762, but many of those have recovered since the first case was announced March 11.

Former U.S. Sen. David Pryor, who had been hospitalized for coronavirus at UAMS Medical Center since July 11, was released Friday, said his son and fellow former U.S. senator, Mark Pryor.

[Video not showing up above? Click here to watch » https://www.youtube.com/watch?v=JoTaVdC0yKU]

"He's home and he's in great spirits," Mark Pryor said. "The doctors told him to get plenty of rest, plenty of liquids, good nourishment, and a little bit of exercise."

He said his 85-year-old father, who was also Arkansas' governor for four years, had a few "minor" symptoms, but the doctors advised having him admitted "given his age and given his health history."

"The first couple of days, he sort of teetered a little bit about maybe getting worse," Mark Pryor said. "He didn't, but the doctors were very unsure."

Fortunately, "he not only stabilized but improved, so they sent him home today," Mark Pryor said.

He said his mother, Barbara, who also tested positive, remains asymptomatic. Both parents are to remain isolated at home "for the next several days and even maybe a little bit longer than is absolutely necessary just to be sure," Mark Pryor said.

"We feel really good about having him home," Mark Pryor said. "This is a very deadly virus for anybody, but certainly, someone in their 80s, you just have to be very, very careful about it.

"One thing that he was saying earlier is that he wants everybody to wear a mask, because you're not just protecting yourself, but you're protecting other people."

He added, "We really are so appreciative for everybody who sent well wishes.

"UAMS, of course, that whole team, the nurses, the technicians, I mean everyone there, not to mention the doctors, they're all just really great, and we appreciate them, just appreciate the whole state for lifting both my parents up in their prayers and just showing a lot of love and friendship."

Hutchinson said he had learned the news from Mark Pryor shortly before lunch.

"That's a matter of great joy that we see that progress in his health condition, that he has been released, and I know that will be good news for all Arkansans," Hutchinson said.

Health Secretary Nate Smith said seven of the deaths that were added to the total were from the past three days. The other five happened between June 24 and Sunday but hadn't been immediately reported to the department, he said.

The number of cases in the state that were considered active, meaning the person tested positive and had not yet recovered, increased by 55, to 6,633, as 581 people were newly classified as having recovered.

At Hutchinson's daily news conference on the pandemic, Joe Thompson, chief executive of UAMS' Arkansas Center for Health Improvement, announced that the center had posted information on the number of coronavirus cases in each city in the state on its website, achi.net.

Measured as a percent of the population, however, Higden, population 120, had been hit hardest. With 25 cases, more than 20% of the Cleburne County town's population had been infected.

Hindsville had the next largest percentage, with its 12 cases making up more than 18% of its population of 61.

The next highest percentage of residents who have been infected was 13% in Danville, followed by 11% in Belleville and 10% in De Queen.

By contrast, less than 1% of Little Rock's population has been infected.

"It's not always the Fayettevilles or Little Rocks of the world," Hutchinson said. "It is the Higdens and Hindsvilles and Danvilles and Bellevilles and De Queens that are some of the top cities in terms of the percent of their population that have tested positive for covid, which obviously indicates that we have to make sure that we're mindful not just in the urban areas but in the rural areas as well to the potential of this spread."

For health privacy reasons, cities with fewer than 10 residents who have tested positive are excluded from the list, which will be updated weekly, Thompson said.

He said the idea for compilation came from discussions with mayors.

"When the reports come out at the county level, a small town mayor doesn't have the power to be able to say, 'We have it in our town,'" he said.

Counties on the list had more than 100 new cases per 100,000 residents the previous week, with more than 10% of the tests in the county coming back positive.

An additional 27 counties, among them Pulaski, Sebastian, Faulkner, Pope, Saline, Jefferson, Crawford, Phillips, Madison, Howard, Columbia and Conway, are labeled "yellow zone," meaning they had 10-100 cases per 100,000 residents the previous week and that 5%-10% of the tests were positive.

In those counties, the report recommends closing bars until the percentage of tests that are positive falls below 3%, limiting gyms to 25% of their capacity and limiting social gatherings to 25 or fewer people.

In both red and yellow zones, the report recommends weekly testing of all workers in assisted-living facilities and nursing homes, ensuring that stores and personal-service business require masks and allow for social distancing, and increase testing and contact tracing in areas where the virus is spreading.

The state also should increase "messaging on the serious risk of disease for individuals in all age groups with preexisting obesity, hypertension, and diabetes" and recommend that people in those groups "shelter in place," according to the report.

Arkansas as a whole was listed as being in the yellow zone for the percentage of tests that were positive, 8.5% the previous week.

"We've already implemented the majority of those recommendations, but there are a few that we're looking at carefully, but they have to fit for Arkansas," he said.

He said the number of new cases in Northwest Arkansas are "coming down," and those in central Arkansas have plateaued and are "maybe going down."

"So we really have not had large hot spots with lots of bars and gyms, for example," Smith said. "So we will try to implement those recommendations in an Arkansas specific fashion when we can, but not everything may exactly fit, because they're designed really for all 50 states."

"The turnaround time for a lab that would handle these tests would also be an important consideration before we moved forward on weekly testing like this," Lesnick said in an email.

The cases added to the state's total Friday included 68 in Pulaski County; 44 in Washington County 32 in Craighead County; 30 in Pope County; 29 in Benton County; 24 in Garland County; 22 in Sebastian County; and 21 in Saline County.

The state's count of cases among prison and jail inmates increased by 39, Smith said. Such increases can reflect new cases as well as ones that were added earlier but not immediately classified as coming from a jail or prison.

At the Cummins Unit in Lincoln County, the number of inmates listed in Health Department reports as having tested positive increased by 58, to 1,062.

Among residents or nursing homes and assisted-living facilities, the number of cases increased by 98, to 1,025, according to the reports.

That included an increase of 52 cases among residents Lake Village Rehabilitation and Care Center, bringing the total there to 73.

At Legacy Health and Rehabilitation Center in Fort Smith, the number of cases listed among residents increased from one to 43.

The reports also listed 21 staff members at the facility has having tested positive, up from zero a day earlier.

Joe Perkins, a spokesman for the home's operator, NHS Management of Northport, Ala., said all the homes' residents tested negative for the virus during mass testing on June 19.

On July 4, a resident began having symptoms and was transferred to a hospital. Test results for that patient came back positive for the coronavirus on July 6.

Only two of the residents and two of the staff members had symptoms, Perkins said.

He said the residents who have tested positive are being kept in a sealed wing of the home with negative air pressure to prevent the spread of respiratory droplets.

Residents who tested negative and had no exposure to those who tested positive were transferred to the company's other nursing homes in the area.

He noted that virus cases and deaths in Sebastian County as a whole have been on the increase. As of Friday it had 1,048 cases, including 355 that were active, and nine deaths, according to the Health Department.

The virus is "exploding in the county," he said. "There is not an impenetrable wall around that long-term care facility that keeps it from getting in."

CORRECTION: After coronavirus testing took place in mid-July at Legacy Health and Rehabilitation Center in Fort Smith, 43 residents and 21 staff members had positive results, according to Joe Perkins, a spokesman for the home’s operator, NHS Management of Northport, Ala. An earlier version of this story gave an incorrect number for staff results. 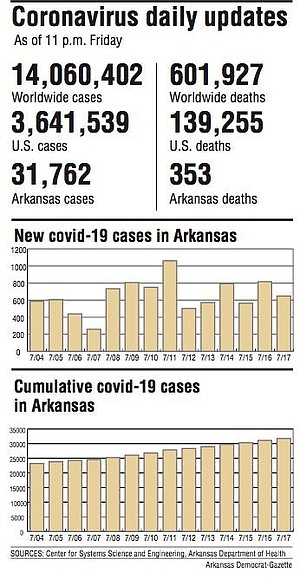