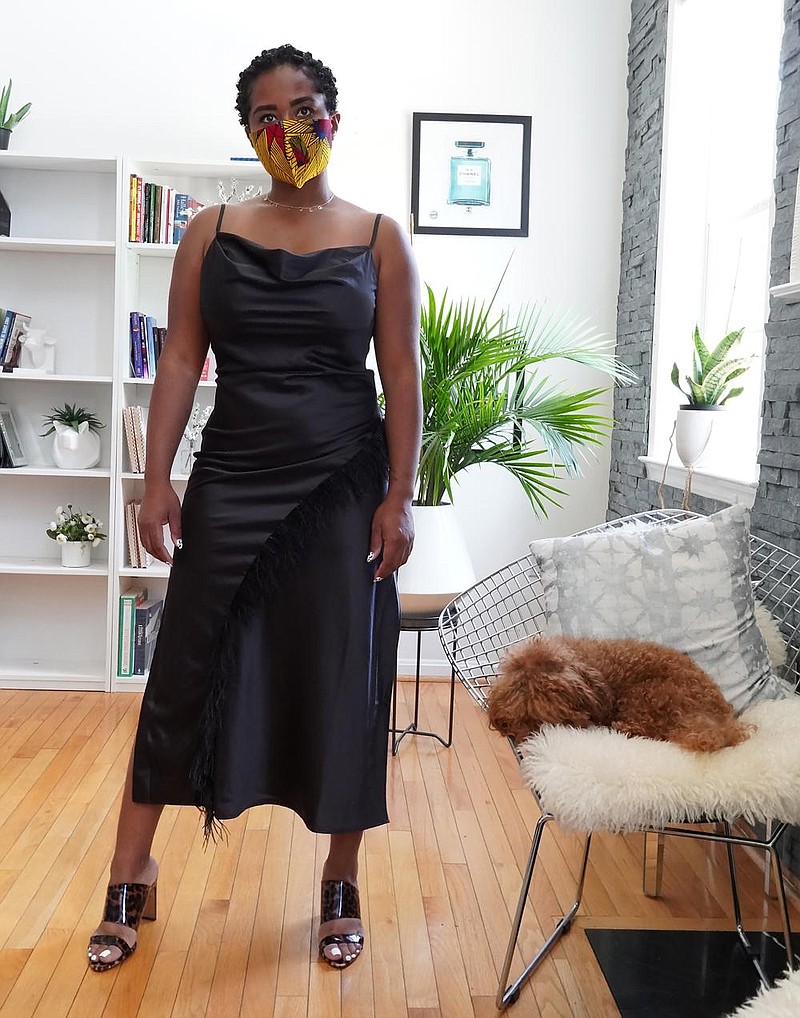 Ronne Brown shows off her Hanifa dress in an undated handout image. Fashion purchases innocently made before the spread of coronavirus are poignant markers of canceled activities. (via The New York Times)

In the weeks before the pandemic, Anthony Longhi, 28, a self-described shopaholic who's a sales associate at Celine in Paris, found himself smitten with a pair of black leather Yves Saint Laurent pants. Their four-figure price felt indulgent, and he hesitated to buy them. Then came the news that France was about to go into shutdown.

That did it. Longhi quickly made his way to the YSL boutique on Avenue Montaigne and bought the pants. They waited in his closet for more than two months.

On the day when lockdown restrictions were eased, he hit the streets in the leather pants, a plain white Zara T-shirt, a Celine moto jacket, a necklace with his own baptism pendant and Perfecto shoes. Alas, a heatwave was on, and he began sweating into the pants. Concerned that they would shrink, he raced back home to take them off and now awaits lower temperatures in the fall.

Longhi's story is, he acknowledged, one of great privilege. But it also has a positive message: He has refused to let the virus hold dominion over him. And he's unrepentant, planning to resume his fashion shopping full-throttle ASAP.

Extravagant purchases innocently made in February and March, before the extent of the pandemic was known, have become markers of a fast-receding era of freedom. Some buyers have even saved their sales receipts, as if they were historic documents. Many of these items now languish in closets. Others are put to good use.

Rating Dries Van Noten's high-impact spring 2020 collaboration with Christian Lacroix "ingenious" and "operatic," and predicting it would signal a return to couture, Li Edelkoort, 69, a fashion forecaster in New York, chose a red-and-black floral jacquard coat from that collection to wear during a spring world speaking tour.

The coat had been little worn "voluntarily stranded," as she put it, in Cape Town, where she has been sequestered since mid-February. Nonetheless, it's become a badge of her identity, worn for a publicity photo -- "a great picture that came in handy for the avalanche of interview requests I've received over these past few months," Edelkoort said.

Lately, she has shown up wearing the coat "on Sundays, intra muros, for private corona brunches." At a local antique fabric store that upcycles interior textiles into face masks, she even found a matching red one.

The gown has yet to be finished, but the accessories arrived with time to spare, prompting Lepore to reach for her glue gun and "stone" them, as she put it, with black Swarovski crystals (surely one of quarantine's more glamorous home couture projects).

She would have worn the outfit to celebrate the Supreme Court's June 15 landmark ruling protecting LGBTQ workers' rights but had to rely on a Garo Sparo green glitter ensemble that she already had on hand to make a video singing "Get Happy" by Harold Arlen, made famous by Judy Garland in "Summer Stock."

In the more workaday realm, jumpsuits were already a look pre-pandemic. With their easy informality, they rival sweats as the semiofficial quarantine uniform. Julie Stahl, 54, the head of Blonde & Co., a creative content agency for the beauty industry in New York, had already amassed a sizable collection. But in early March, an off-white one in the window of Lululemon Lab in NoHo irresistibly beckoned.

She bought it, even though she's "not one of those SoulCycling Lululemon types," she said. Turns out the new jumpsuit is "insanely comfortable and perfect for anti-contamination -- I just throw it in the washing machine at the end of the day. Ironically, it looks a little like a hazmat suit."

New York hat designer Lola Ehrlich, 72, also bought a jumpsuit, when she was preparing for Paris Fashion Week in late February (in gray, from Alex Mill, at the designer's SoHo boutique). Accompanied by pearls and a frilly white blouse underneath, it proved perfect for her sales meetings.

As customers flocked in from Milan, where the coronavirus had already taken hold, "the big question for the French, who otherwise kiss constantly at trade shows, was whether to give la bise -- the double kiss," Ehrlich said. But now her main association with the jumpsuit is "wearing it when I was bis-ing or not bis-ing."

She has yet to put it on since then.

Ronne Brown, 36, the founder and CEO of Girl CEO Inc., an organization in Washington that advises Black female entrepreneurs, has also hung something up, on a closet door.

One of her clients is Anifa Mvuemba, a Congolese-born fashion designer, whose Hanifa clothing collection has been attracting attention. Early in March, Brown went to the Hanifa showroom-shop in Kensington, Md., and bought a low-cut, shape-revealing black slip dress with side slits and ostrich feather trim to wear the following week at the empowerment dinners being held at a March retreat in Cancún, Mexico, for the women's organization EGL (Everything Girls Love).

DRESS HAS BEEN ON DISPLAY

The shutdown began hours after her return flight. Since then, the new dress has been on display -- at least when her 17-year-old daughter, Amor, isn't trying it on.

But Brown refuses to designate the dress for festive events at unspecified future dates. "I'm just going to dress it down and pair it with tennis shoes," she said.

Then there is Mike Greko, 29, a musician, songwriter and DJ in New York, whose eclectic style incorporates elements of Nu-disco, rock-edge pop and more.

He already owned a Ziggy Stardust-esque bespoke red sequined performance suit from Ammar Belal Custom Menswear, but back in January he ordered a second, "in gray silver with a teal blue hue when the light hits it," he said.

It arrived just before the shutdown began. Now he sometimes tries it on, "pretending it's the good old days." Otherwise, he said, it's hanging from a door hook, waiting patiently for when clubs reopen. But why two sequined suits? "They bring me joy," said Greko, "and according to Marie Kondo that's a good thing."

Kondo would surely approve the use to which Muriel Favaro, 67, a Parsons School of Design accessories instructor, has put a humongous Comme des Garçons tote bag in a peculiar celery color that arrived from Italy just days before the shutdown: She turned it into a knitting basket for all the random skeins of yarn that had been lying around her apartment in Jersey City, N.J.

A bid for joy also guided the propitious Last Purchase of Fred Dust, 52, a design consultant who has long spoken at public events and conferences. After decades wearing denim shirts to videoconferences, in February Dust had a style reckoning and decided it was time to liven up his on-camera presence.

So he went for a Sandro short-sleeve floral print shirt displaying Rorschach-y blue and purple flowers on a vivid yellow background -- "a shirt that was specifically meant to trigger joy," he said. "That way, I wouldn't hate myself when I'm on Zoom."

What luck: Dust now spends pretty much all his professional time videoconferencing.

Putting home exercisers to shame, Morgan Wolin, 58, a champion equestrian and sports psychologist in Chicago, performed spectator-less, recently. She and her horse, So Smitten, were at the kickoff event of the Saddle Seat Equitation Triple Crown in Lexington, Ky.

But she wasn't wearing the custom riding suit she ordered in February from a specialty outfitter, also in Lexington. The suit -- its fitted show coat and starched white shirt evoking an earlier age -- has yet to arrive because the shipment of the suit's wool-silk fabric was delayed in Italy, so she had to go with an old one.

In retrospect, Wolin regards this purchase as "symbolic, representing a different time -- before we had to worry about personal safety the way we do now. Not that it will get me out of covid."

At least the race will be proceeding. Katrina Razon, 29, a music festival and cultural events producer in Manila, obsessed over dress choices for the March celebration of Tatler Philippines. Her final choice? A Staud bubble-gum-pink halter-neck maxidress with a cutout waist and open back, summoned up online from Moda Operandi.

But the event, as so many others, was canceled and has yet to be rescheduled.

"This crisis has been an intense accelerator," Razon wrote in an email. "I shake my head when I reflect back to how anxious I was deciding which dress to wear, and I realized very quickly that we are not the clothes we wear. Working in the music industry, my mind has shifted from little worries to survival."

Verity Zisser, 16, a high school student in London, is confident the "loads of clothes" she bought for Glastonbury, Redding, Boardmasters -- the summer music festivals -- will get their airing next year. In the meantime, she couldn't resist cutting the pants of a Depop blue-gray track suit into shorts and wearing them with her homemade abbreviated bandanna top and her Nike Air Force 1 high-top sneakers.

It's summertime. Style goes on! 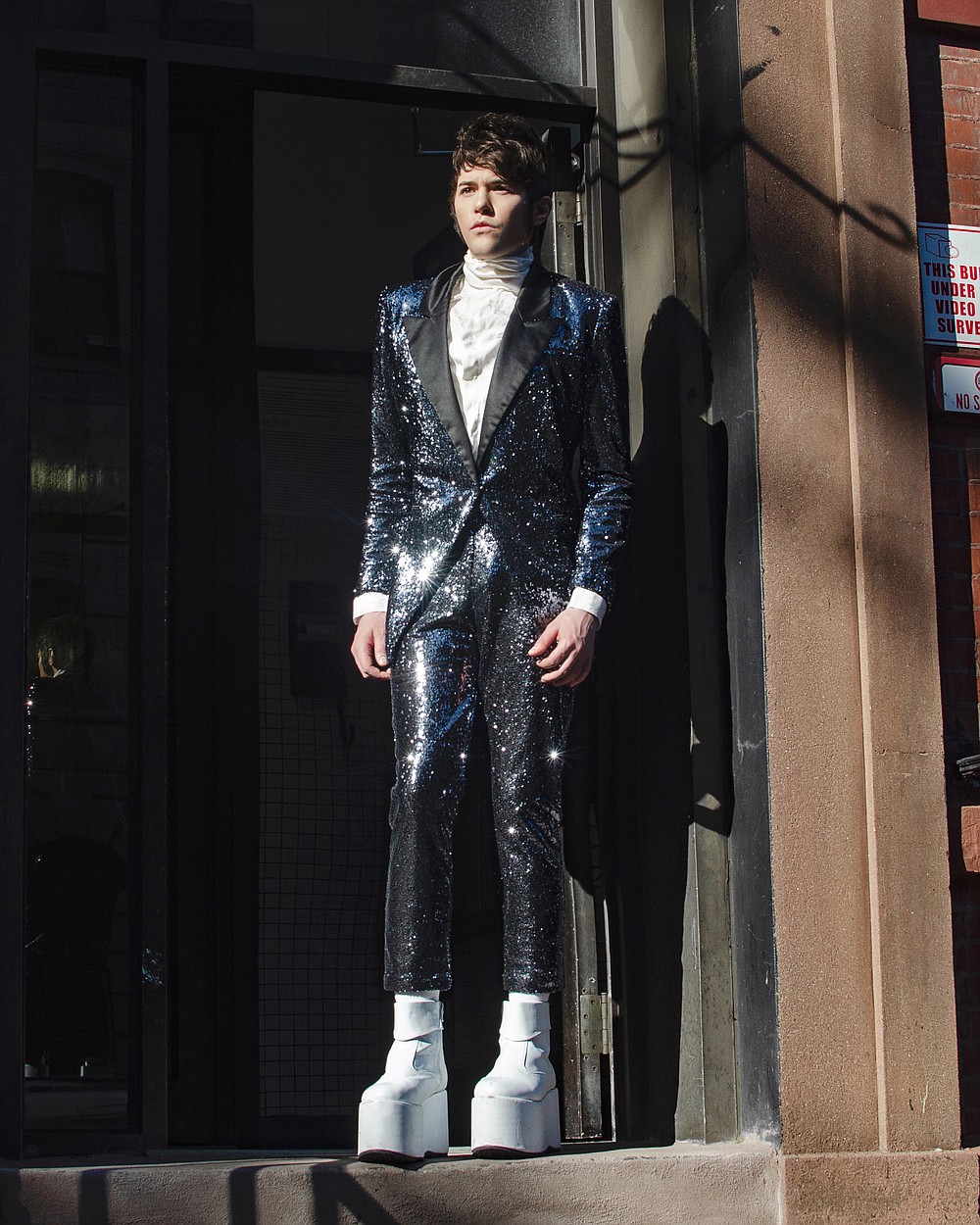 In an undated image provided by Kyle Glen Ullsperger, Mike Greko in his glitter suit. Fashion purchases innocently made before the spread of coronavirus are poignant markers of canceled activities. (Kyle Glen Ullsperger via The New York Times) -- NO SALES; FOR EDITORIAL USE ONLY WITH NYT STORY FASHION SPLURGES NEVER WORN BY LINDA DYETT FOR JULY 8, 2020. ALL OTHER USE PROHIBITED. --
ADVERTISEMENT