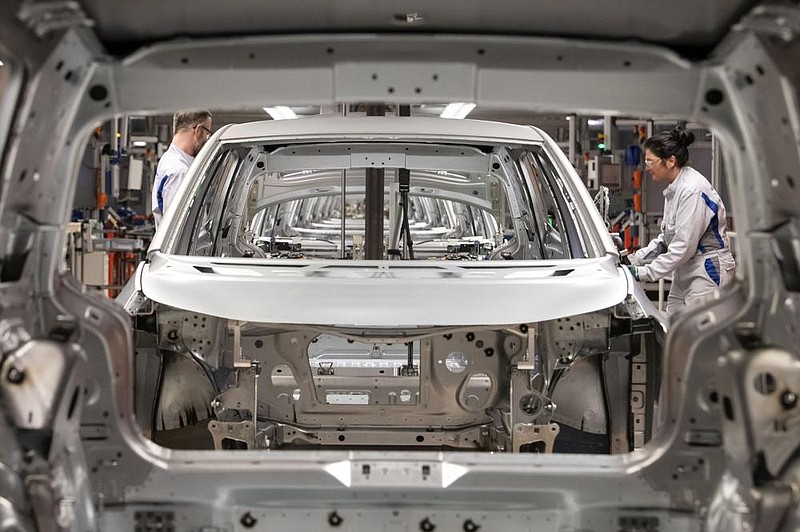 In this February photo, workers complete an electric car ID.3 body at the assembly line during a press tour at the plant of the German manufacturer Volkswagen AG (VW) in Zwickau, Germany. (AP/Jens Meyer)

FRANKFURT, Germany -- The coronavirus has canceled business plans all over the world, but Europe's push into electric cars isn't one of them. Sales of battery-powered and hybrid cars have held up better than the overall market amid a painful recession, mainly thanks to the action of governments.

The 27-country European Union is moving ahead with a shift in transportation as part of the bloc's efforts against climate change. Under regulatory pressure carmakers are rolling out a slew of new electric models so they can meet tougher limits on greenhouse gases that go into full force next year.

Battery-only models are becoming more affordable, especially as sales are supported by substantial government subsidies. As sales of internal combustion cars have fallen, demand for battery-only cars and hybrids that combine electric motors with conventional engines has been stable or even increased, recent statistics show. By contrast, electric car adoption is moving more slowly in the U.S. because of regulatory uncertainty.

The market share of battery and hybrid vehicles rose sharply across major European markets during the first half of the year, even as the outbreak closed showrooms in March and April.

One of the pandemic car buyers was Frank Schendel, a dentist from a small town outside the Bavarian city of Augsburg. In May he bought a battery-powered Hyundai Kona Elektro, a compact SUV-style hatchback. He had rented a Tesla on vacation for a couple of days.

"My son is getting his driver's license at the moment, and a Tesla is bit too expensive and too fast, so I was glad to discover the Hyundai Kona," he said.

He hasn't driven his 10-year-old Mercedes E-Class station wagon since. "It's fun, fast and quiet, technologically up to date," said Schendel, 52. "We drive the Kona everywhere: 500 kilometers [about 310 miles] to visit grandma, grocery shopping. We do every trip with the Kona."

The 64 kilowatt-hour battery has a range of up to 300 miles, enough to reach grandma with just one stop at a highway charging station.

Electric car buyers are attracted by large government incentives. Under the German government's latest stimulus package, for example, an electric car with a price tag under $45,500 is eligible for a $10,100 incentive, $3,350 of that to be paid by the manufacturer.

Car buyers now have 70 different battery and hybrid models to choose from, with prices starting below 20,000 euros (about $22,500) including those local subsidies in the case of the Seat Mii, the Renault Twingo ZE, and the Skoda CITIGOe IV. Volkswagen says it will start delivering its ID.3 battery hatchback by year's end, starting under $34,100.

"The demand is growing fast, very fast," said Juergen Sangl, an auto dealer in the town of Landsberg am Lech who sold Schendel his Kona.

Sangl decided in 2016 to anticipate the trend and focus on electrics, which are 90% of his business. "It has gone the way I suspected it would -- first a trickle, now a flood," he said.

Beyond the incentives, customers find electrics more attractive once range exceeds 186 miles on a charge.

Automakers in the EU need to reduce the average emissions of their fleets to 95 grams of carbon dioxide per kilometer driven starting next year. That's equivalent to 57.4 miles per gallon of gasoline.

To achieve that, manufacturers will have to increase electric sales from 7% to 12% of the market, according to advocacy group Transport & Environment. The new limit is part of the EU effort to comply with the 2015 Paris climate accord to reduce carbon dioxide emissions, blamed by scientists for global warming and accompanying climate change.

The U.S., with cheap gasoline and a federal government that wants to roll back fuel economy requirements, is lagging the rest of the world in electric vehicle sales and launches.

But since automakers have to develop vehicles to sell globally, and some companies see electric cars as the future, the U.S. is starting to get more models. General Motors CEO Mary Barra has promised an "all-electric future," with the company developing 20 electric models to sell globally by 2023.

President Donald Trump wants to roll back automotive fuel economy requirements enacted when Barack Obama was president. But the rollback has been challenged in court, and it's uncertain which standards automakers will have to meet.

If Trump loses the election in November, it's possible that Joe Biden, the presumptive Democratic candidate, could reimpose the Obama-era standards.

In China, a reduction in subsidies led to a slowdown in electric sales late last year, but the government is moving ahead with its requirement for more low-emission vehicles over the long term. Electrics were 4.9% of the market.

Saul Lopez, e-mobility manager at Transport & Environment, said European automakers appear on track to meet the carbon dioxide goals. He noted, however, that carmakers often seem eager to sell enough cars to meet the requirement, but not much more. Some electrics have sold out.

The reason: "The carmakers make poor margins on electric vehicles and good margins on SUVs," he said: "At the end of the day, it's a compliance-driven market."

Information for this article was contributed by Tom Krisher of The Associated Press. 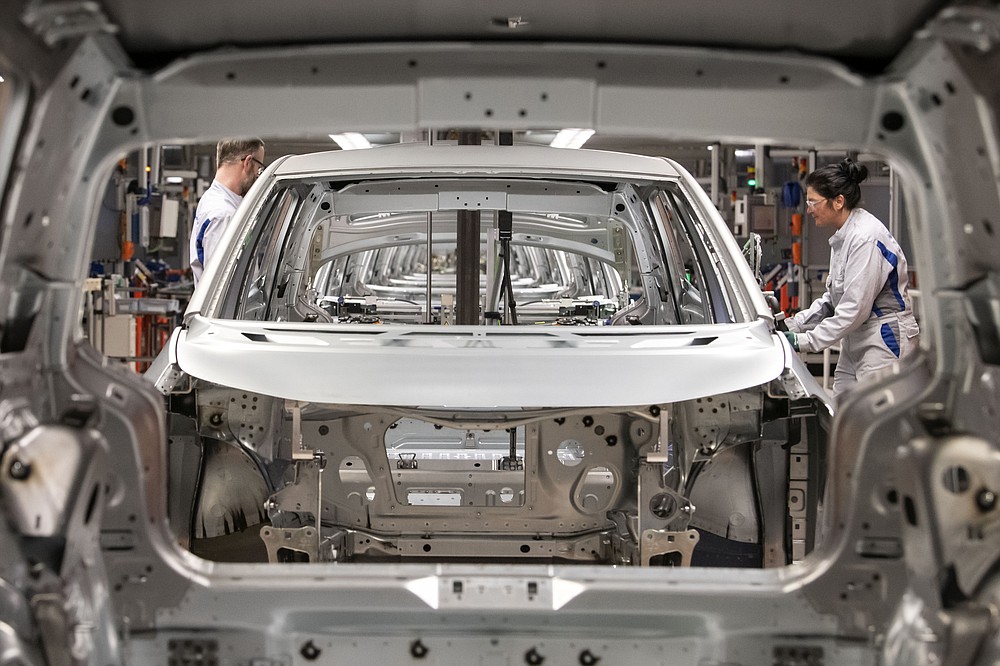 FILE- In this Tuesday, Feb. 25, 2020 file photo, workers complete an electric car ID.3 body at the assembly line during a press tour at the plant of the German manufacturer Volkswagen AG (VW) in Zwickau, Germany. The coronavirus has cancelled business plans all over the world but Europe's push into electric cars isn't one of them. Sales of battery-powered and hybrid cars have held up despite a deeply painful recession, mainly thanks to the action of governments. (AP Photo/Jens Meyer, file)
ADVERTISEMENT