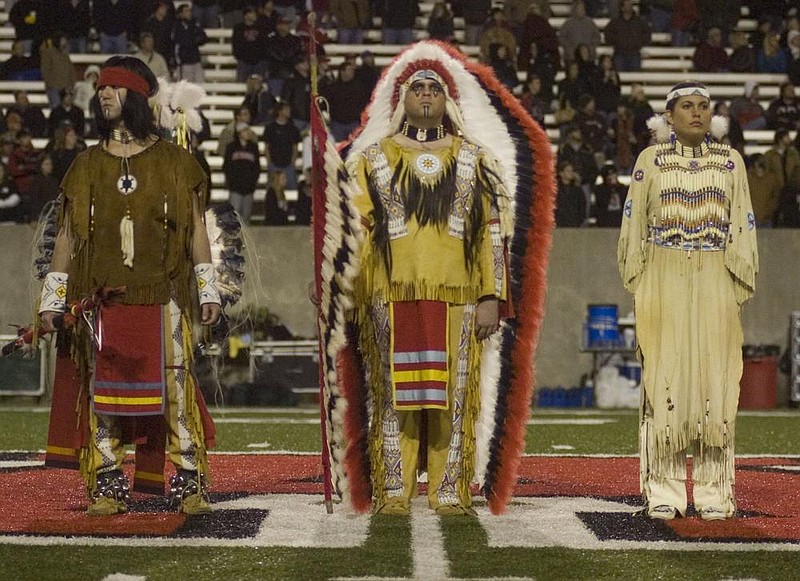 The Arkansas State “Indian Family” is honored during a ceremony at halftime of ASU’s football game against North Texas in Jones- boro on Nov. 15, 2007. It was ASU’s final football game using “Indians” as its mascot. (Democrat-Gazette file photo)

Hanging on Shane Broadway's office wall is a painting that reads: "My Indian name is Red Wolf."

"I'll always be an Indian," said Broadway, a 1994 Arkansas State graduate and former member of the Arkansas House of Representatives and Senate. "But to this day, I believe it's the best decision the university has ever made."

Arkansas State's 2008 move from "Indians" to "Red Wolves" has become relevant once again, as Washington's NFL team announced Monday it's moving away from its longtime mascot, the Redskins. And in a twist, Red Wolves is one of the leading candidates to become the team's new mascot, according to The Washington Post.

Broadway, now ASU's vice president for university relations, and other Arkansas State alumni remember it wasn't long ago that their school went through a similar transition. And 12 years later, many Arkansas State alums are glad they got it right years ago.

Even if they were reluctant at first to do so.

"I'll tell you I didn't like it. I didn't like that they were forced to change. I was a longtime Indian," said Mike Beebe, the Arkansas governor from 2007-15 and ASU alum. "Change is hard sometimes. So your initial reaction is to resent the change. But in a matter of months, I realized it was a needed change and a good change that actually advanced the program.

"They've done more in marketing with Red Wolves and the Red Wolves logo in the years since 2008 than they ever did with Indians in the previous decades."

Arkansas State's decision to retire the "Indian Family" after 77 years as the university's mascot wasn't by choice. In 2005, the NCAA announced guidelines for use of Native American mascots, listing Arkansas State and 17 other universities as schools that were subject to the new policy. The NCAA directive prohibited schools "from displaying hostile and abusive racial/ethnic/national origin mascots, nicknames or imagery at any of the 88 NCAA championships."

"You could see the environment at the time, there was a movement to change names of Native American mascots across the country," said Dean Lee, ASU's athletic director from 2002-12. "You obviously listen to what is happening."

Jennifer Guiliano, author of "Indian Spectacle: College Mascots and the Anxiety of Modern America," said the NCAA wasn't banning Native American mascots, but instead was "interested in the television contracts and the advertisers who had concerns about sort of showing mascots that their viewers might consider racist or problematic or insulting to them."

Essentially, Guiliano said, Arkansas State and other schools were left with no choice.

"When I look at Arkansas State, it's not a question of them saying, 'we want to honor natives now' or 'we recognize what we did was bad now,' " said Guiliano, an associate history professor at Indiana University-Purdue University Indianapolis. "What they're saying is, 'we recognize now this is bad for our public image and that it impacts our financial bottom line if we're banned from hosting tournament play and banned from representing our school the way we need to do it.' "

This made Arkansas State's decision a simple one. Jeff Hankins, who was on the 33-member committee that eventually decided to retire the Indian Family, said the cost of keeping the mascot and the legal battle that would follow would have cost the school more than $200,000. According to USA Today, Arkansas State's 2008 athletics budget was just over $8.3 million.

"The NCAA was a substantial factor. There was more of a national push at that time than a local push because I think our fans felt like there was an element of positivity supporting Native American heritage," said Hankins, now ASU's vice president of strategic communications. "But there were clearly some who disagreed. There were some faculty members and Native Americans who lived in the area who disagreed with that. And the committee took all of that into consideration."

Arkansas State felt as though it had taken steps to dignify the mascot prior to 2005, leaving behind the "Jumpin' Joe" nickname in 1991, which depicted an American Indian waving a scalp in one hand and a club in the other. It was eventually replaced with the Indian Family, which included "Chief Big Track" and an unnamed American Indian princess and brave.

Broadway, who was Chief Big Track in 1992, said he felt it was important to always treat the Indian Family with dignity and respect, and he believes most did.

The Indians name was originally chosen by Arkansas State to show respect for the "fighting spirit" of the Osage tribe in northern Arkansas. Then-Osage Nation Principal Chief Jim Gray did not support ASU's interpretation of the tribe and was happy to see the mascot go.

"We are pleased Arkansas State University has joined the noble fraternity of schools that have chosen to honor Native Americans by not using their image or names as part of their schools mascots," Gray said in a 2008 statement. "We encourage them to find more appropriate ways to connect with the Indian community through education. We hope that the last days of the mascot are respectful and thoughtful about the new approach toward racial sensitivity."

When Arkansas State officially retired the Indian Family on Feb. 28, 2008, many fans were sad to see the old mascot go. Some still consider themselves Indians. But most fans have embraced the Red Wolves logo and brand, and all that's come with it -- the mascot Howl, the Wolves Up hand gesture and even the preservation of red wolves in the United States. Not to mention the football team has 41 more victories in the 12 seasons after making the change than the 12 seasons before.

So, if Washington were to choose Red Wolves as its new nickname, some alumni, like Broadway, aren't bothered by it. Others, like Beebe, are all for it as long as "they pay enough money in royalties."

Either way, they both say Washington could learn a thing or two from how Arkansas State handled its transition 12 years ago.

"The thing I will say about that whole process, especially with what's going on today with Washington, Cleveland [Indians] and anybody else," Broadway said, "is that I think the way that the university handled it, went about making the decision, putting a committee together of every stakeholder, the way the Indian Family was retired, the way the new logo and mascot were rolled out ... I thought it was as well done as anyone could ever do it."

"It should be the textbook for every team that ever goes through this discussion. It could not have been done any better."