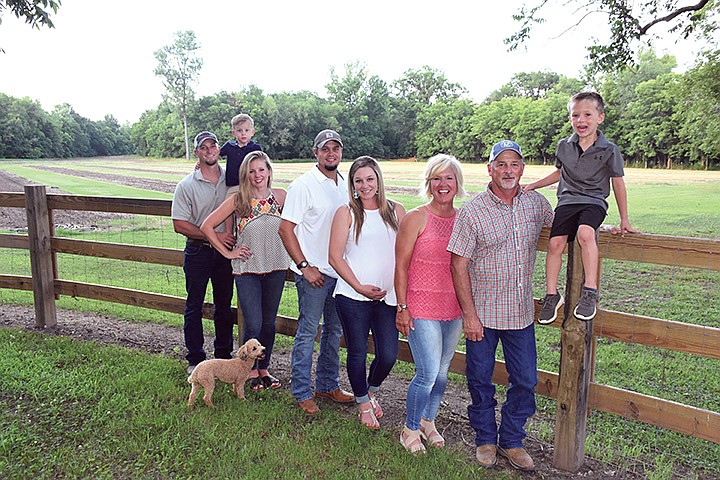 BoBrook Farms of Roland is the 2020 Pulaski County Farm Family of the Year.

Bobby and Karen Bradford started the farm, which is near the Arkansas River, in 1994. They now own 300 acres and raise blueberries, blackberries, grapes, muscadine and pumpkins.

BoBrook Farms is a working farm, as well as an event venue and winery.

“I am honored to be chosen farm family with so many awesome farmers in our county,” Bobby said.

“We were quite excited and honored when we learned we had been named Farm Family of the Year,” Karen said. “Our farm is so different. We actually were a little bit shocked.

“We really want to get into agritourism. I want to grow the farm and make it into a fun, educational place for people to visit. We want to provide the people with an experience when they get here. We also have goats, sheep and cows. We have a little bit of everything.”

The Bradfords’ son, Bo, 33, and his wife, Kristi, live on the farm with their two sons, Mac, 5, and Jace, 3. Bo works for Bradford Morris Construction LLC, and Kristi works for Duke Custom Cabinets, both in Roland.

Bobby and Karen’s daughter, Brook, 27, and her husband, Justin Redman, also live on the farm with their infant daughter, Amelia Marie. Brook is a sales representative for Antique Brick and Block in Little Rock, and Justin works for Bradford Morris Construction LLC.

“We all live right here on the farm,” Karen said, laughing. “We are blessed.”

Bobby said the couple named the farm after their kids, Bo and Brook.

“They grew up on the farm and love it, but neither wants to work here full time,” Bobby said. “They both went to college and have great jobs. They help us when we need it and don’t complain.”

Bobby, a son of Bob and Sandy Bradford of Ferndale, and Karen, a daughter of Charles and Vivian Combee of Roland, have been married 35 years. They were high school sweethearts at Joe T. Robinson High School in Pulaski County, just outside Little Rock. Bo graduated in 1983 and Karen in 1985. Both have other jobs as well. Karen is a beautician and the owner of the Circle B Salon, which is located on the farm. Bobby owns and operates Bradford Excavation in Roland.

Neither Bobby nor Karen grew up on a farm.

Bobby said he always thought he would love to be a farmer.

“We always had cows and a garden, but it was a very small operation,” he said. “When Karen and I had the opportunity to purchase our first 100 acres, I couldn’t wait to get my first crop in. It was memorable.

“Since neither of us is from a farm family, it’s been a struggle. We didn’t have the luxury of inheriting land and knowledge. We have stumbled through a lot of stuff. We definitely do things differently than most farmers, but we found a way it can work for us.”

Bobby said the couple established a pumpkin patch on the farm in 2008.

“This is our main source of income. We have over 10,000 people visit the farm for our patch every year,” he said.

“Our winery was established in 2014,” Bobby said. “The winery is running a close second [as a source of income]. We struggled starting, but this is snowballing. People enjoy the wine, but more than that, they enjoy coming out to the farm and getting a breath of fresh air. They also enjoy that we grow a lot of the fruit that we use to make the wine.

“Our wedding venue was established in 2011. Weddings are a big part of what we offer, but we have started expanding events at the venue the past few years. Murder-mystery dinners, family gatherings and office parties are a few things that we offer.”

Bobby said that because their children “chose not to take over the farm at this time, we have decided to make the farm where we can manage it alone. That has included simplifying where we farm and letting some things go.”

“We choose crops that are easy to care for and are native to our area, which cuts down on maintenance,” he said. “Our main problem was irrigation. We have been able to extend irrigation to everything we’re growing. All but one field is operated by an automated system.

“We have a large field where we use poly-pipe flood-type irrigation for our pumpkins. I also made a two-row planter for my wife and dad to sit on and plant pumpkins. That cut all of the work out of getting our pumpkins in.”

Karen said the family planted pumpkins just a few weeks ago in anticipation of their busy season in October, when they open the pumpkin patch.

Karen said they used the planter Bobby made, “and the whole time I’m sitting there planting and relaxing, I thank the good Lord that Bobby made that crazy-looking thing.”

Bobby said their biggest hurdle has been the river.

“We are protected by the levee, but unfortunately, our levee gates have been broken ever since we have lived here,” he said. “At first, it wasn’t a huge problem, but the past several years, it has been devastating. We have lost part of our orchard and had to completely remodel the barn after a bad flood.”

Bobby said that in 2017, he was appointed to the Roland Drainage District Board of Directors, and the board began repairing the levee gates.

“This prevented us from complete devastation over this last flood in 2019,” he said. “We were able to secure a portion of the federal grant money to repair the levee gates and are working on that now.”

Bobby is also a member of the Maumelle Water Corp. Board of Directors.

Bobby and Karen were both active in their children’s activities when they were still at home and in school. The couple were also involved with church youth activities. The Bradfords now attend New Life Church at Maumelle.