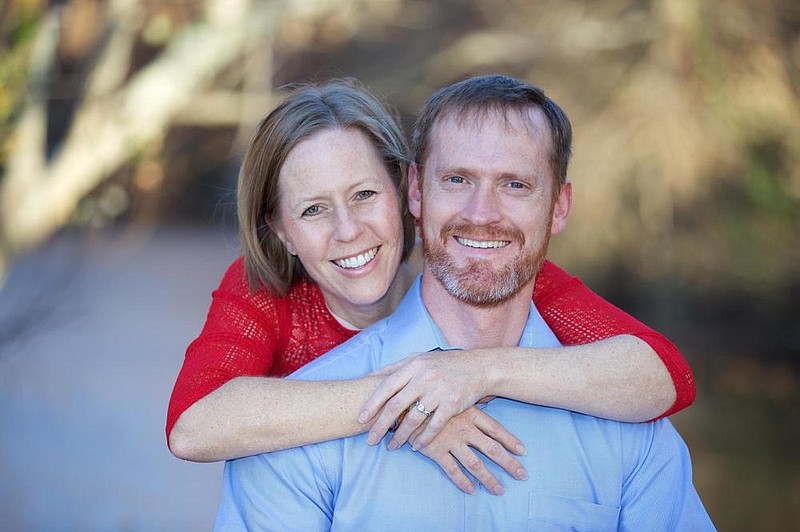 Amy and Joe Lee just celebrated their ninth wedding anniversary. “We do not have the perfect marriage. He gets on my nerves sometimes, and I annoy him on occasion,” she says. “Yet we choose to love and forgive each other daily. I am thankful that God brought us together and I can say with confidence that He is continuing to write our story of love.” (Special to the Democrat-Gazette)

Amy Grant and Joe Lee were worlds apart when they first met.

Joe was on leave in Germany during deployment in Iraq in November 2008 when he saw her profile on Christian Café, an online dating site. He didn't leave a message, but the site let Amy know he had visited.

"I looked at his profile, and I thought he looked interesting," says Amy, who lived in Dalton, Ga., at the time.

Amy was divorced and had four young children at the time, and that was clear in her brief online profile. Until then, Joe had been filtering out women who had children, and he can't say for sure why he deviated from that plan.

"I don't remember exactly what I sent, but it was enough that she was willing to send me two pages of information," Joe says. "It was refreshing. I'm a type-A driver, I'm highly analytical and detail-oriented, and I don't play games. If you're playing games, you're probably not for me. So when I got two pages of information back, I was just like, 'Oh, OK, somebody wants to communicate.'"

They talked for a while through the site and then exchanged personal contact information so they could continue their conversations via Skype and email.

"We were probably Skyping each other about every other day," he says. "I had to get up at 4:30 in the morning just to talk to her."

He says he knew within 30 days that they were destined to be together.

"I knew very, very, very quickly that I was going to have to figure out how to convince her that I was the right guy," he says.

They met face-to-face in April 2009, right after Joe's deployment ended.

Joe describes himself as "pretty systematic," and says he wanted to meet Amy's family and see where she lived before focusing on a one-on-one relationship with her. He had already met her children -- who ranged in age from 5 to 10 years old at the time -- online during one of their video chats, about three months after they met.

"After I had been there a couple of hours, [we] got our first kiss," he says. "She goes, 'I didn't know how long you were going to make me wait.'"

Joe was in a Reserve unit that was planning to deploy to the Balkans in January 2010.

He proposed as they went into the Melting Pot in Chattanooga, Tenn., for dinner on Oct. 18, 2009.

He left the following morning for a two-and-a-half-month-long military school.

"It was extremely hard," he says. "I didn't get to talk to her. When I did talk to her, I wasn't nice. I was operating on an hour, hour and a half of sleep at night, and I did that for months on end. And then when I got back I had less than 30 days before I redeployed to Kosovo in the Balkans."

They decided to choose a country where they could meet to marry while he was on leave.

"I did a lot of online research to find someplace to marry us at the drop of a hat and there was only one country that would do it, and that was Denmark," Joe says. "Every other country wanted you to live there for six months or six weeks or two weeks. Germany had tons of rules, and we couldn't go to a military base and get married because I was not stationed there."

Joe hired a wedding planner to take care of the details and he and Amy met in Frankfurt, Germany, before the wedding. They had to catch a ferry to the island where they were going to marry, but they overslept and arrived just in time to see it gliding across the water.

"I'm in a straight panic because this is the only day that we can do this because the next day they're closed and we have flights going down to Greece for our honeymoon," Joe says.

He reached their wedding planner, and she arranged to have everything put on hold for a couple of hours so they could catch the next ferry to the island. Everything worked out and they got to exchange their vows on July 6, 2011, after all.

Amy and Joe moved from Dalton to Benton in the summer of 2012. She is a music specialist at Hurricane Creek Elementary. Joe is a holistic health and wellness coach and is currently pursuing a master's degree in alternative medicine.

Both are happy they found each other from opposite ends of the world.

"We do not have the perfect marriage. He gets on my nerves sometimes, and I annoy him on occasion," she says. "Yet we choose to love and forgive each other daily. I am thankful that God brought us together, and I can say with confidence that He is continuing to write our story of love."

She says: “I was excited to finally meet him because for me that was going to kind of seal the deal. I knew all the stuff he had been telling me, but I had to see it with my own eyes.”

She says: “I was relieved we were finally able to find the right place and get married that day.”

He says: “I remember being frustrated because I could have just waited in the parking lot instead of spending money to get a room and sleep for an hour and a half and then we wouldn’t have been late.”

She says: “There’s no such thing as a marriage without problems, so deal with your stuff with each other. If you don’t deal with it it’s not going to get better and there’s a good chance it could get worse.”

He says: “Your spouse isn’t there to make you happy and keep you happy.”