Statues toppled in 1990s in Russia but little changed 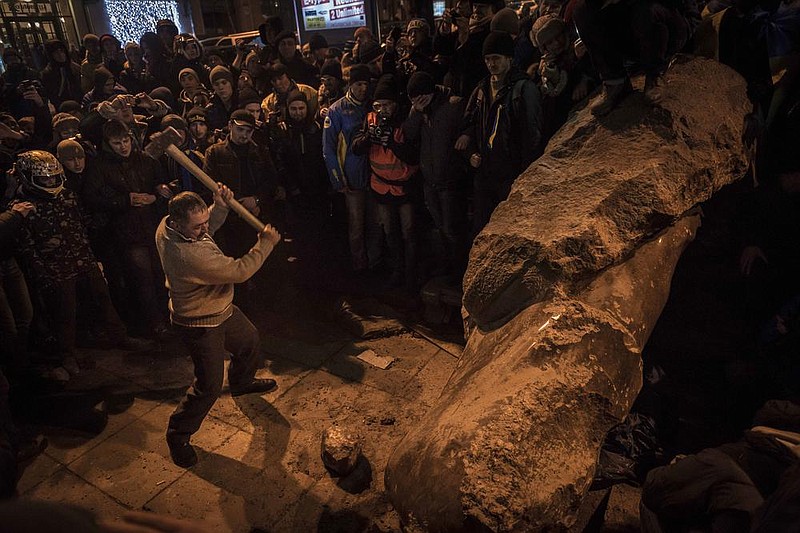 Protesters smash a statue of Lenin after it was pulled down in Kyiv, Ukraine, in December 2013. (The New York Times/Sergey Ponomarev)

MOSCOW -- Elated by the defeat of a hard-line communist coup in August 1991, thousands of mostly young Muscovites gathered in front of the KGB headquarters and argued over how best to seal their victory with a bold, symbolic act.

After some discussion, recalled Sergei B. Parkhomenko, then a young journalist covering the scene, the crowd turned its passion -- more euphoria than anger, he said -- on the statue of Felix Dzerzhinsky, the ruthless founder of the Soviet secret police, which stood in a traffic circle in front of the Lubyanka, the forbidding stone building that housed the KGB.

The removal of the statue, accomplished with help from a crane sent by Moscow city authorities, was greeted with cries of "Down with the KGB" and sent a message that change had finally arrived in Russia.

Or so it seemed at the time. Nearly 30 years later, Russia is ruled by a former KGB officer, President Vladimir Putin, and Dzerzhinsky is honored with a bust outside the Moscow city police headquarters.

As the United States boils with anger over police brutality and racism, the experience of Russia since the collapse of communism offers a cautionary lesson in the perils and disappointments of toppling monuments.

Russia never engaged in a deep reckoning with its Soviet past, airing injustices and holding people accountable. Instead, atrocities were glossed over and some of the old elite, particularly in the security services, reconstituted themselves in power.

Parkhomenko said he had no regrets about the removal of Dzerzhinsky -- known as "Iron Felix" because of his unbending defense of Soviet communism -- and certainly doesn't want him back.

But he lamented that what had been a highly gratifying symbolic strike against the old order did not bury, or even really dent, the system the statue represented.

"Everything has turned around," he said. "The putsch failed, but 30 years later it has won. Russia's power system today is much closer to what the putsch wanted to achieve than what those who protested against it wanted. This is our great tragedy."

The Dzerzhinsky statue was initially dumped on the ground outside a Moscow gallery of modern art along with other "fallen heroes" -- among them a pink granite statue of Stalin, his face smashed by hammer blows, and a bronze statue of Yakov Sverdlov, an early Bolshevik leader, toppled in 1991 from a square facing the Bolshoi Theater.

They are all now back on their feet as part of the Muzeon Park of Arts, a state-managed open-air exhibition that also includes artistic tributes to their victims, like a 1998 work called Victims of Totalitarian Regimes, a long wire cage containing sculpted stone heads.

Every few years, the Communist Party calls for Dzerzhinsky's return to his pedestal in front of what is now the Federal Security Service, or FSB, the post-Soviet name of an otherwise little-changed KGB. But the symbolism of that would be too much, even for Putin.

The Kremlin has mostly focused on erecting new statues, not restoring those demolished in the 1990s. Among the new additions is a towering monument to Lt. Gen. Mikhail T. Kalashnikov, the designer of the AK-47 assault rifle. The bronze statue, erected in 2017 on one of Moscow's busiest thoroughfares, depicts Kalashnikov cradling one of his automatics, looking from a distance like an aging heavy metal guitarist.

News broadcasts on Russian state television have been filled in recent days with scornful reports about statues coming under attack in the United States. They lament that Christopher Columbus, Confederate generals and other historical figures have been targeted by what is depicted as rage-filled vandalism.

But Russia's dismay is also felt by many liberal-minded intellectuals who do not watch state television or share its jingoistic glee at troubles in the West, but have lived through their own country's efforts to shake off its past.

"Waging war on bronze men doesn't make your life any more moral or just," said Maria Lipman, who worked in Moscow as a journalist as communism was collapsing and cheered when Dzerzhinsky was taken down. "It does nothing really."

Statues of Stalin, the Soviet dictator who died in 1953, quickly vanished across the empire he ruled. One prominent exception was his hometown, Gori, in Georgia, which waited until 2010 to remove him from its central square.

Today, however, the tyrant, whose body was removed in 1961 from a mausoleum in Red Square that still holds Lenin's corpse, has never been more popular in Russia. An opinion poll last year found a record 70% thought Stalin played a positive role in Russian history.

"Deleting doesn't work," said Nina Khrushcheva, a Russia expert at the New School in New York City whose grandfather, former Soviet leader Nikita Khrushchev, tried to break the grip of Stalinism only to be ousted from power in a 1964 Kremlin coup.

"Denouncing Stalin was Khrushchev's greatest achievement, but removing him from all public spaces, trying to delete that history, was a big mistake," she said. "Once you demolish somebody's hero, you only incite hatred and force feelings underground."

Mikhail Y. Schneider, a pro-democracy activist who led protesters to the KGB headquarters in August 1991, said attacking Dzerzhinsky's statue was a "great emotional release" that "helped us believe we were living in a different country," but "it changed nothing."

For real change, he said, the removal of Soviet-era symbols needed to be accompanied by a program of exposing crimes, putting those responsible on trial and returning confiscated property.

In a few lands liberated by the demise of Moscow's empire, the swift removal of statues had a powerful impact. Three tiny Baltic nations quickly purged streets and parks of Soviet heroes as part of a broad and highly successful drive to rejoin the West and escape Moscow's shadow.

But Russia, where Soviet rule was a homegrown phenomenon, has struggled to confront an era that is still remembered with pride by many as a time of Russian grandeur.

That seemingly immovable certainties enshrined in public monuments can and do change is a theme explored by a new art installation at Garage, a museum of contemporary art in Moscow.

The installation, called Transformer and made up of interchangeable pieces that are regularly rearranged, was inspired by a square in Tashkent, the capital of Uzbekistan, a former Soviet republic, that has had six different names and eight different monuments over the past century.

Whether statues should stand or fall has been a topic of heated debate for decades in former Soviet lands. Ukraine, particularly, has demolished Lenin statues and other monuments with gusto, seeing them as symbols of past subjugation to Moscow.

But this did nothing to make Ukraine any less corrupt or its officials any more accountable. Instead, it widened divisions between the Russian-speaking east of the country, which has clung to its statues of Lenin as totems of identity, and the rest of Ukraine.

When protesters in Kyiv, the capital, toppled Ukraine's pro-Kremlin president in February 2014, Russian-speaking agitators in the country's east set up an armed camp around a statue of Lenin in the city of Donetsk, vowing to defend it from what they said would be imminent vandalism.

Defense of Lenin against attacks that never came stoked emotion, rallied resistance to the new government in Kyiv and helped turn what began as a local quarrel over language and identity into a full-scale war. Fanned by Moscow, which sent fighters and weapons, the conflict, now it its sixth year, has claimed more than 13,000 lives.

Alexei P. Kondaurov, a retired KGB officer who was working late in the Lubyanka when protesters gathered outside in August 1991 and began attacking Dzerzhinsky, worried that events could easily spin out of control. He said he told armed guards not to shoot if protesters tried to enter the mostly empty building.

He was horrified when the crane arrived and pulled Dzerzhinsky from his pedestal, dumping him on the ground. "For me this was a big psychological blow. It ended a stage of my life," he recalled. But, he added, "I never thought this was a new start. I realized nothing would come from this."

Though now a critic of Putin and what he sees as Russia's steady drift backward, Kondaurov denounces the "vandalism" of Russia's first democratically elected leader, President Boris Yeltsin, and his supporters. "Putin is the direct continuation of Yeltsin," he said, lamenting that symbolic gestures have become a substitute for concrete, forward-looking change.