WATCH YOUR LANGUAGE! Baby names must not be too weird, world says 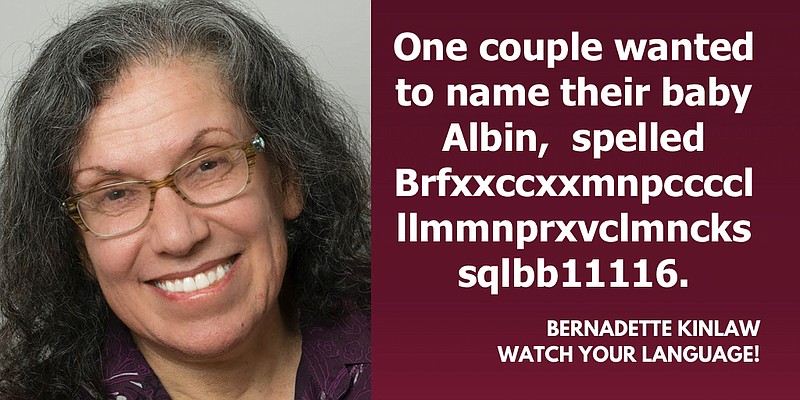 Naming a baby is a giant responsibility. I will always be happy about being named Bernadette, even though mean kids in elementary school would ask me, "Did you burn your debts?" What kid would think of that?

Around the world, parents have plenty of freedom in naming their kids, but lots of limits do exist.

In Australia, parents have to avoid obscene words and characters such as # or *.

This would seem to allow a ton of flexibility, but parents there still were prevented from naming their kids: LOL, Batman, Snort, Hitler, Spinach, Panties and Blank Space.

In France, one couple tried to name their daughter after the hazelnut spread (that I also adore), Nutella. The authorities said it was a no-go. The parents chose Ella, instead.

In New Zealand, forget about naming a kid Lucifer. Parents can't be as devil-may-care as all that.

Some odd parents in New Zealand named their poor daughter Tulula Does the Hula From Hawaii. When the girl was 9, a judge put her under court guardianship so she could choose another name. The new name wasn't revealed, but I'd bet it wasn't Snort.

The judge in that case mentioned other children's names that have caused hardship for kids and were therefore banned: Yeah Detroit, Fish and Chips, Twisty Poi, Sex Fruit.

Britain is fairly easygoing, but a few names it wouldn't allow are Monkey, Rogue and Martian. I wonder whether parents from Mars have ever tried to sue the British authorities over the Martian decision. Also, one mother was told her child's name could not be Cyanide.

I must pause here and wonder why in the world a parent would name a child Panties. Let alone John Panties.

In Sweden, parents claimed that Albin, the name they chose for their baby, was spelled Brfxxccxxmnpcccclllmmnprxvclmnckssqlbb11116. Someone needs typing lessons. It was banned.

Other names banned in Sweden are Metallica, Veranda, Elvis, K8lyn and Q.

Denmark has particularly strict naming laws. Parents must choose from a list of about 7,000 approved names. But parents can appeal if they want a different name. First, the parents must get the OK from the church, and then the church asks a panel of the Ministry of Social Affairs and Integration. About 1,100 sets of parents try to break out each year.

Spoiler alert: Monkey and Pluto are out of the question.

A common theme around the world seems to be that a name shouldn't be allowed if the child will be ridiculed. In Germany, gender-neutral names and family names are also banned as first names. Naturally, the name Adolf Hitler is banned. Other banned names are Stompie, Woodstock and Grammophon.

In Italy, parents weren't allowed to name a baby Venerdi, which means Friday. The court gave the baby a new name: Gregorio. The court said that "Friday," which was the name of the companion and servant in Daniel Defoe's Robinson Crusoe, was too closely tied to "subservience and inferiority." I would have thought the kid would often hear, "Thank God it's Friday!"

Malaysia cracked down on names in 2006. In Malaysia, Chow Tow, which translates as Smelly Head in Cantonese, was banned. Also, Sor Chai, which means Insane, was forbidden. James Bond's spy name, 007, was forbidden, as was the translation for Smelly Dog.

In Portugal, names may not sound foreign. So, forget Olaf, Nirvana and Kennedy for a Portuguese kid.

In Saudi Arabia, leaders banned names that didn't match the culture and religion of the nation nation. This means Alice, Elaine, Linda and Sandy are out.

Some of the 50 U.S. states have their own rules. Some ban special characters and accent marks. Many states ban obscenities.

The Bump pregnancy and parenting website posted a list of rules in different states. I wasn't able to confirm their facts on state websites, so let me know if you see anything false.

In Arkansas, apostrophes and hyphens are OK in names, but they can't be consecutive. So J'-ohn is out. Some names that aren't allowed include Baby, Infant, Test and Void.

In Arizona, most names are OK, but the child's full name must be 141 characters or less. That must be for the parents who post the baby's birth on Twitter.

California specifically bans emojis for names. Also, accent marks aren't allowed, which means Hispanic names such as José are out. That is strange.

I guess each state's technology affects what names are OK. In Illinois, the computers are OK with the ever-popular 1Der and 2-Riffic. That's a relief.

In Utah, parents are out of luck if they want a child's name to include any character not found on a keyboard. The state says this "would make applying for and receiving a birth certificate more laborious."

Vermont seems to be fairly carefree about names. It's OK to name a child IBM or other trademarks. Also, Anthrax and other diseases are fine names for children, apparently. But, the state "highly recommend[s] against it."