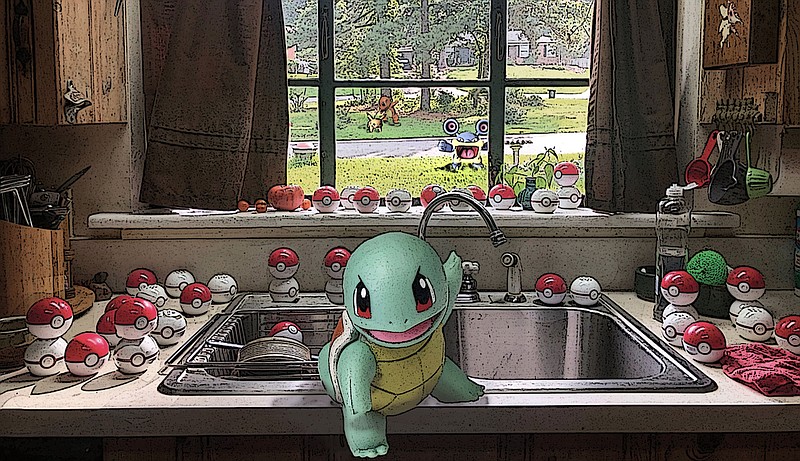 Squirtle keeps his buddy supplied with pokeballs so she doesn't have to walk around town much during the pandemic. (Democrat-Gazette illustration/Celia Storey)

In a pandemic, when gathering large groups of people together could prove disastrously hazardous to public health, and the act of wandering your city is discouraged, how does a game based on those mechanics survive?

Pokémon Go is a game played while you walk around using a phone app to collect little monsters that exist in a digital realm laid over your actual city like an invisible map. The map "augments" the reality of real places by turning them into stops that players "spin" to collect monsters or monster eggs.

You learn where every piece of public art is in your city because that is where you will find a Bulbasaur or collect potions to heal your little monsters.

A solitary walker can play Pokémon Go, but as I explained here in December 2019, the social aspects of the game truly bring it to life.

In early March as stay-at-home orders were issued around the world, Niantic alerted trainers (that's pokémon speak for "players") about changes in the game. The Community Day event planned for March was postponed indefinitely — thus removing the incentive for trainers to gather in what tend to be sizable numbers. Also, the distance a trainer had to walk to hatch an egg — one of the best methods for getting pokémon that don't commonly appear in your area — was cut in half.

Combined with an in-game mechanic called "Adventure Sync," which tracks players' steps to award them distance credit even when the app isn't open, the changes allowed trainers to hatch eggs by walking near -- or within -- their homes.

Niantic also increased the number of pokémon appearing and items dropping at stops so that trainers could walk shorter distances and still achieve their goals.

Probably the most dramatic modification was to a game tool called "incense." When a trainer uses incense, pokémon come directly to the trainer. Ordinarily, incense works for 30 minutes and will only produce more than a handful of pokémon if you are walking around at a quick pace. The pandemic update to this tool removes the walking requirement and extends the active time to one hour.

Pokémon are still only visible to individual players but will now spawn once per minute with no momentum requirement, and the tool stays active for an hour.

What does that mean? If you have incense, pokémon will come to you in roughly the numbers you might have seen while walking outside.

Immediately after the change was implemented, Niantic made the unprecedented move of offering a one-time purchase bundle of 30 of the new incense for a single coin of the in-game currency. The deal went away as of March 30, but for that time Niantic effectively gave away the tool to their players.

There's more. Not long after it announced the new rules for incense, Niantic modified a series of rules around "gifts." Gifts are little bundles of items similar to what you receive at pokéstops that you can send to or receive from in-game friends. You're allowed to keep

gifts on hand to be sent later, but you can only open a gift sent to you by another person. The number of gifts you can store and open have both doubled, and the frequency of receiving pokéballs inside a gift was increased substantially. That means gifts can contain more of the balls needed to catch pokémon.

A fun part of the game has been training one pokémon monster to follow you around and be your buddy. During the pandemic, the buddy system was modified so that in addition to bringing you the strange little gifts of random objects they were already bringing, now buddies might bring you gifts to give away or even pokéballs.

With all of the changes above, players now had all the main tools for daily play coming directly to them with no need to wander outside.

As the weeks and months of lockdown stretched on, Niantic made more changes. The distance from which you could interact with the nodes known as gyms doubled, letting people spread out more when interacting with them. (Gyms offer item pickup and ways to earn in-game currency; raids happen at gyms.)

◼️ Trainers automatically get a single field research task every day without having to spin a stop. Research tasks are small challenges — like "catch five pokémon" — that give players a few valuable items or an unusual pokémon. Completing at least one task every day will give you a special pokémon every seven days.

◼️ Remote raid passes allow trainers to play while outside of the normal range of a gym (raids involve several players cooperating to battle a single powerful pokémon at a gym).

A forthcoming new tool, announced but not yet released, will allow trainers to invite friends to join a raid from a distance so everyone can play together without crowding together.

Such a dramatic change to how the game is played does introduce a new problem: How do you keep an augmented reality game from going stale when players used to being outside and social are stuck in the same small part of "reality" by themselves all day? Niantic's solution has been to make the game more active by introducing:

◼️ Longer-form timed events that feed into other events.

◼️ Events that play on the updated form of incense, etc.

It was not uncommon in the past to have several small special events back-to-back in the summer, but this year has been something else altogether.

Events in April and May featured a rotation of different pokémon every hour of the day, all keeping to a particular theme. Special research for special pokémon or an extended experience via ticketed events were offered many times, including on each Community Day.

Most interesting, the timed research events formerly used for single-day events were revamped into a completely new style of gameplay. For nearly all of May, trainers received a new set of themed research tasks with a one week countdown clock attached. Complete all of the tasks in each weekly set (which generally had many steps including catching special pokémon and interacting with other players at a distance) and you would unlock a set of tasks with fun rewards and no time limit. 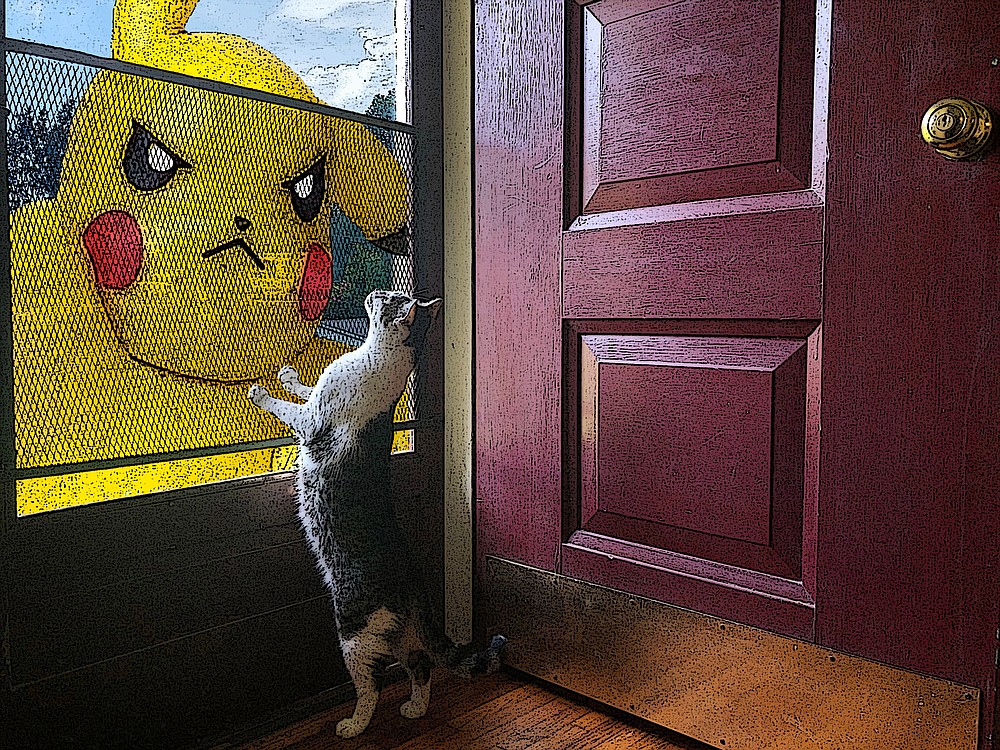 Big parts of the Pokemon Go game now come to you so you can play while staying home and social distancing during the pandemic. (Democrat-Gazette illustration/Celia Storey)

In the past, Pokémon Go Fest was the apex of Niantic's summer events, celebrating the anniversary of the release of the game with a huge in-person event in Chicago. Ticket holders could capture rare pokémon, try out event-specific gameplay and play with people from all over the world. This year, such an event is unthinkable.

Using the ticketed event system tried and tested out multiple times during the shutdown, Niantic has transformed the physical, location-bound fest into a global digital event. Trainers can buy a ticket to participate within their own communities.

For past Go Fest events, those players who could not afford the trek to the festival or were unable to purchase tickets could participate in a pared-down global event offering some field research tasks and highlighted pokémon. Still, the best gameplay was limited to those with the resources to travel to and stay in Chicago.

This year, participation has also been expanded for those who don't purchase a ticket. Extended timed-research tasks such as those used in May have unlocked the appearance of special pokémon during the event for all players, new pokémon released in conjunction with this research are available to all players, and those players who have only just started playing or who weren't playing last year will have a special "Jump Start" research available with huge rewards to help them catch up to other trainers.

All and all, it rounds out to three weeks of added gameplay and features leading up to the first truly global festival event Saturday and Sunday.

All of these changes and features that have made playing during the pandemic easier have also answered old complaints against the game by rural players and players with limited mobility.

Rural players generally have far fewer places to gather materials and potentially no gyms to raid. The gift system was one solution, and this term's changes make it a more effective solution. The forthcoming raid invitation system will give rural trainers greater access, too.

Every benefit for at-home play is also a win for players with limited mobility. In the past, with so many features tied to walking, injured or disabled players were left out. Now, more of the game comes to them.

The weight of grief, fear and anxiety can tamp down the little joys we had before. Anniversaries and other markers of change have gone out the window, replaced by lonely birthdays, un-held proms, unattended funerals. I recognize that it is a frivolity to continue to care about catching imaginary little creatures, but Pokémon Go is also one of the most engaging, positive activities left in my day-to-day.

As before, the game is a neutral zone populated by positive, supportive people who continue to celebrate each others' luck and wins. Facebook groups and Reddit threads still boom each day to the "likes" and comments of fellow trainers. We still play together, just with a little more pre-planning.

If, reader, you too feel the strain of the times, perhaps you should consider revisiting this piece of childhood nostalgia. It's been rebuilt to help you through.