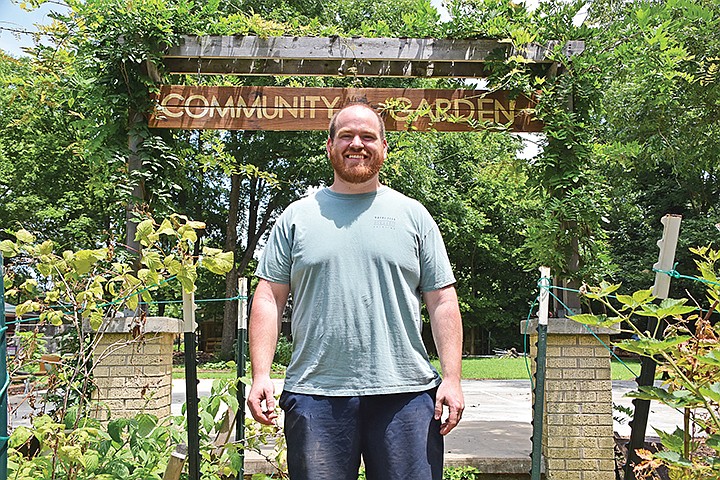 Vance Bow is director of The Maple House in Searcy, a nonprofit started in 2016 with the purpose of sharing the Gospel with neighbors and providing opportunities for community unity. He stands in front of The Maple House’s community garden, which is open for anyone to take produce, Bow said. ( Staci Vandagriff)

When Vance Bow was a junior at Harding University in Searcy, he asked himself questions such as “Why am I in Searcy?” and “Why am I becoming a teacher?”

“I thought the answer was because of God and the fact that I wanted to glorify his name in my life, but that wasn’t the answer at all. Instead, it was because I showed up to play football, and I wanted an education degree because I wanted summers off,” Bow said. “It turned out, the big things in my life were either not thought through at all or were for very selfish reasons.

“A couple of others and I decided we needed to serve and find a way to plug into a community and be a part of what God is doing in this neighborhood, so we brought a football, found a field and started playing football with some kids. We wanted to have continual relationships and make an impact.”

The Maple House nonprofit was started by Bow in 2016 with the purpose of sharing the Gospel with neighbors and providing opportunities for community unity. Bow said he and some others raised enough money to purchase the house.

“Basically, as Christians, we intentionally made lifestyle decisions to put us in contact with people who are different than us,” Bow said. “One of our goals is to form better racial unity, including closer and tighter ties with our Black neighbors.

“We are working closely with the homeless population and striving for financial unity. Through all of this, we will be able to find people who don’t know Jesus and be able to tell them about him as well.”

Unlike most community gardens, which allow individuals to pick a plot and maintain the garden plot themselves, Bow said people are welcome to come to the garden and pick what they need. He said the garden consists of planted boxes of tomatoes and peppers, as well as berry bushes out front. He said anyone is welcome to share the produce.

Bow said the primary mission of The Maple House was its tutoring program, which had to be shut down after Harding University closed early in March because of COVID-19. He said that prior to the pandemic, a lot of the neighbors sent their kids to learn from a tutor, as well as volunteer for the community garden. He said others would barbecue the meat when The Maple House hosted events.

At the end of June, The Maple House had a basketball tournament for the community, despite the COVID-19 pandemic. Bow said COVID-19 was not a huge deterrent for the event because, as he put it, the general public had gotten more relaxed in the precautions taken for COVID-19.

“We let everybody know we had a plan, and we had them sign a waiver so if anyone got injured or sick, we wouldn’t be held liable,” Bow said. “We wanted to host this event because our primary mission is to show how hate is not a proper channel for exploring differences in race, class or religion.

“This event, which went extremely well, had teams from China, from our community, from homeless people in Searcy, as well as doctors — it was a very God-glorifying thing.”

Bow said the issue of race is not going to be solved by a basketball tournament, but such an event allows neighbors to start looking at each other as individuals and engage in conversations instead of hiding behind a computer, which, he said, has allowed it to become easier for people to become more polarized and “throw out all our feelings, rather than speaking face to face.”

“You don’t have to choose your lifestyle or career, just based on how to make yourself most comfortable,” Bow said. “As Christians, that shouldn’t be our metric.

“We should be asking ourselves, ‘Where will God use me in ministry?’ and that’s the career I’m going to choose. The Maple House community is where we can best serve the Kingdom of God. That’s why we are still here.”

Andrew Pyle has been involved with The Maple House since 2017, about a year after the program started. He said he and Bow were roommates at Harding for a period of time and became good friends.

“He had a vision to do something for God’s Kingdom, and I wanted to be a part of it,” Pyle said. “[My wife and I] prayed about it and felt like God was leading us to join.

“I really liked the idea of how through my regular life, I could be doing God’s work and making friends and talking about God with the people I see on my walks or in my neighborhood.”

Pyle said that while spending time at The Maple House and with its community, he developed good relationships with people he wouldn’t otherwise have met. He said they made a difference in his life.

“We chose to live in this neighborhood because of The Maple House,” he said. “I don’t know if we would have lived here otherwise, but it has been very rewarding, and I have experienced something I would not have otherwise.”

For more information, visit The Maple House’s website at www.themaplehouse.org.