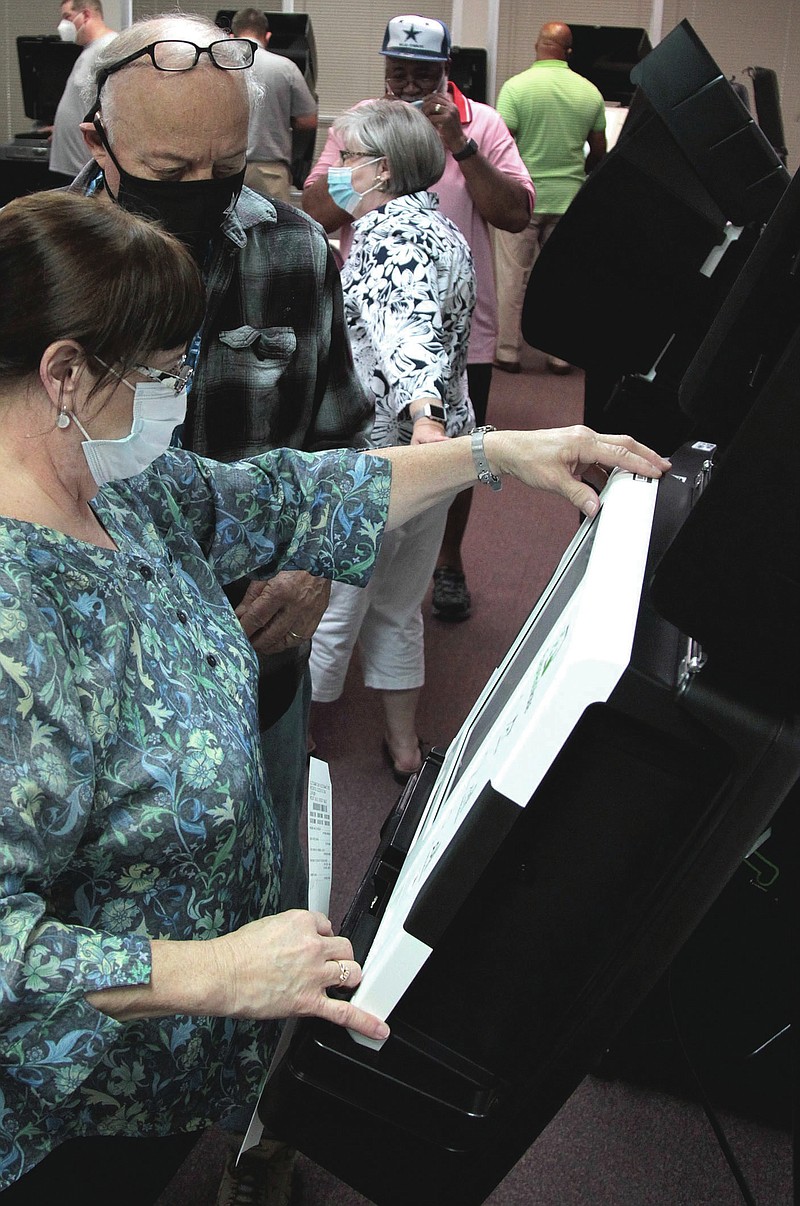 A technician with Election Systems & Software, the voting system vendor that is supplying new voting equipment to the state, explains to Stuart "Stu" Soffer, a member of the Jefferson County Election Commission, how to operate the new ES&S ExpressVote voting system during a training session on Monday. The county recently received nearly $1 million in new voting equipment to replace the aging ES&S iVotronics voting system that had been in use since 2006. County election officials trained on the new equipment Monday and are scheduled to wrap up training today. (Arkansas Democrat-Gazette/Dale Ellis)

The training, which concludes today, is intended to familiarize officials with the Jefferson County Election Commission and the county clerk's office with the new equipment, and to enable those officials to then train poll workers on the equipment they will be using.

The equipment arrived on two semitrailers filled to capacity with 148 ballot markers, 148 stands, 80 poll tablets and printers, 41 vote tabulators, and assorted equipment intended to bring the county up to the latest standard in voting hardware and software.

That equipment replaced the aging, glitch-prone ES&S iVotronics voting system the county had been using since 2006.

"When it comes to poll worker training, we're looking for places with plenty of room for social distancing," Soffer said. "I'll find a venue if I have to rent the Shrine Temple for the training."

Soffer said poll worker safety is a top priority, and to that end he said masks and gloves will be in plentiful supply and he plans to purchase face shields and gowns for any poll workers who wish to have them.

"Those gowns aren't cheap," he said. "They cost about $50 each, but I've applied for grant money with the secretary of state's office and [the Office of Emergency Management] to purchase the gowns and face shields. We want to do everything we can to make our poll workers feel comfortable."

Soffer said he is working to have a "no contact" election, wiping down voting machines between uses, and even using a tray for voters to place their identification so it can slide it across a table for the poll workers to verify.

He said Election Commission Chairman Michael Adam will send letters to the county polling sites outlining the safety measures and asking for commitments from those sites to be available in November.

Similar letters, he said, will be sent out to poll workers.

"Our big concern right now is having a sufficient number of polling sites and enough poll workers to staff them," he said. "We want to make sure our poll workers know what steps we're taking to keep them safe during this election."

Jefferson County Clerk Shawndra Taggart, who was present at the training session Monday, said she was favorably impressed with the new voting system.

"It seems like it will be a lot easier, especially on our end," she said. "Much easier and faster."

The equipment was part of a $2.7 million purchase made by the Arkansas secretary of state's office using state and federal funds to provide new voting equipment to nine Arkansas counties that lacked adequate funding to share the cost with the state.

By the March 3 primary, 64 Arkansas counties had upgraded to the new ExpressVote system, purchased through a mixture of local, state and federal funds. Pulaski and Scott counties signed contracts in February to receive new voting equipment. The nine remaining counties -- Bradley, Conway, Fulton, Jefferson, Lee, Monroe, Newton, Searcy and Stone -- were notified in April that they would receive the equipment without having to come up with matching funds after the coronavirus pandemic resulted in a sharp economic downturn.

Even before the pandemic, Jefferson County had made clear that it would be hard-pressed to come up with matching funds to qualify for state assistance to make the purchase. The estimated $940,000 cost of the machines would have required Jefferson County to pay just over $321,000 out of county funds. County officials had been saying for months that declining revenue had left the county with barely enough funds to cover its ongoing obligations. 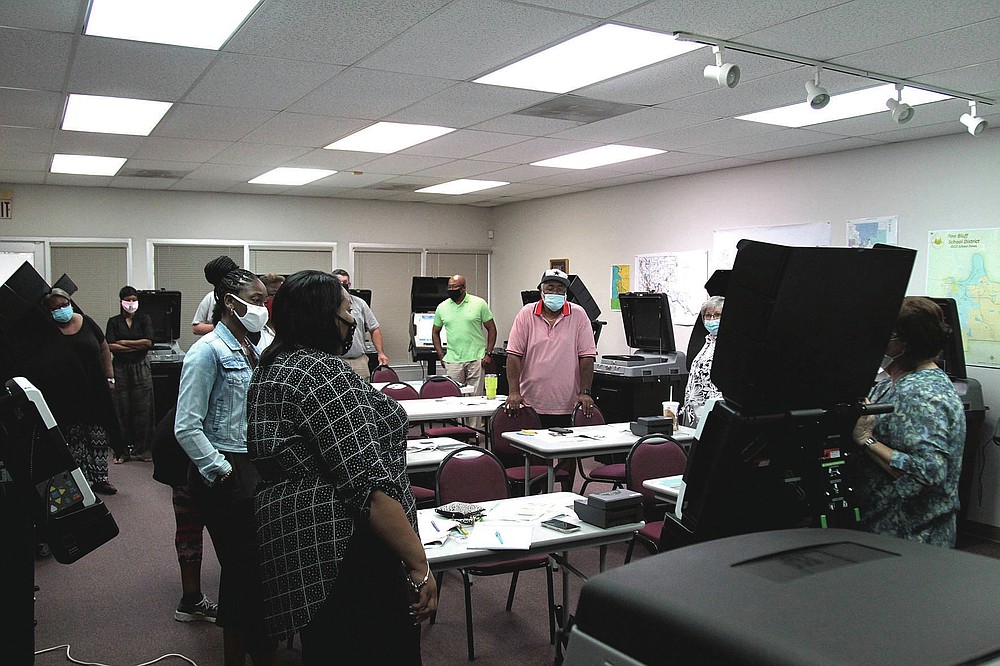 Jefferson County election officials listen as a training from Election Systems and Software explains how to operate the new ES&S ExpressVote voting system. The county recently received nearly $1 million in new voting equipment to replace the old ES&S iVotronics voting system that had been in use since 2006. (Arkansas Democrat-Gazette/Dale Ellis)
ADVERTISEMENT