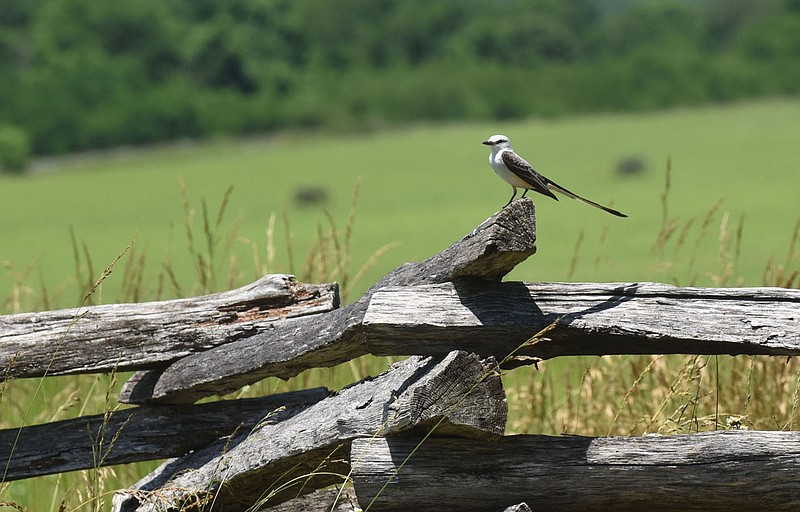 A scissor-tail fly catcher rests on a rail fence June 12 2020 at Pea Ridge National Military Park. The Civil War battlefield and national park is a top bird-watching destination during summer and all year long. A variety of habitats in the spacious park attract a wide variety of birds, with different species in the park depending on the season of the year. (NWA Democrat-Gazette/Flip Putthoff)

The sweet songs of colorful birds are a stark contrast to the thunder of cannons and gunfire heard in 1862 during the fierce, fiery Battle of Pea Ridge.

The Civil War battle raged March 7-8 in the fields and woods at what is now Pea Ridge National Military Park. The 4,300-acre national park protects the integrity of the battlefield and honors the 23,000 Union and Confederate troops who clashed in deadly combat.

Today hikers, bicycle riders and birders are among the thousands who visit Pea Ridge National Military Park each year. Hundreds of bird species migrate through the park, especially during spring.

The park is a chorus of bird song early on summer mornings.

That's what motivates birders like Joe Neal of Fayetteville and Terry Stanfill of the Decatur area to hit the road in the cool of the morning and to head for the park situated four miles east of Pea Ridge.

Visitors can learn about the Battle of Pea Ridge at several information stops along a seven-mile paved tour road that winds through the park. Bird watchers can stop as well and scan the forests and meadows, with both ears open for singing birds.

Neal and Stanfill identify birds as much by sound as by sight, as they did on an early mid-June morning at the national park. The game plan for this fine feathered expedition was to bird from the paved road, but also hike mowed trails to areas of the park that few people see.

During the peak of spring bird migration in May, Neal visited the park and counted 86 species. A notebook is always open in Neal's field-vest pocket. He jots down each species as he sees it.

"If we get 50 today, it'll be good," Neal said. "Most of what we'll see today are nesting birds," not migratory birds.

Neal has been bird watching most of his life. Yet when he spots an uncommon or unusual bird, he's as excited and enthusiastic as a kid catching his first fish. A Kentucky warbler was the first to have Neal jumping for joy, binoculars in hand.

The warbler of spectacular color was in woods along a hiking trail at the site of old Leetown, a mile west of the visitor center. It's one of those rarely visited areas, since most people stay on the paved road.

Later, Neal rejoiced with fists raised high at the sight of a wild turkey. That's a true trophy bird any nature lover delights in seeing. Neal added it to his tally.

Three hours and a glorious morning later, Neal's tally was around 50 species for the day. What makes Pea Ridge National Military Park a paradise for bird watching?

There's a variety of habitat, from prairie to stream bottom land to fallow fields and mature forest. That draws in the amazing variety of birds.

"Then you have a wonderful paved road that goes through all that habitat," Neal added.

A major effort by the park staff over the years to restore the park more to its 1862 appearance has made the habitat even better.

Thinning of some forests, including the removal of hundreds of cedar trees, and prescribed burns have transformed parts of the park. The work has been instrumental in improving the quail population at the park and adjacent private land.

Replica cannons are placed hither and yon around the park. They give the battlefield a Civil War feel for visitors. Bluebirds like them, too. Stanfill trained his camera lens on a bluebird nest inside one of the cannon barrels.

"Where else can you see an eastern bluebird nest in a cannon barrel?" he said, laughing.

Wildflower watchers can find all the blossoms they care to see at Pea Ridge National Military Park. Stanfill identified several, including wingstem, pasture rose and purple milkweed, which is a key wildflower for monarch butterflies. Purple milkweed grows right beside the park's paved road.

As fine and fun as nature exploration can be here, Neal emphasized it's important to remember why this national park exists. It's because of a pivotal, terrible Civil War battle won by the Union. Some 400 soldiers were killed outright in the fight. Many more died later of their wounds, according to the park website. Total casualties were more than 3,000.

That's cause for a moment of silence, among the songs of beautiful birds. 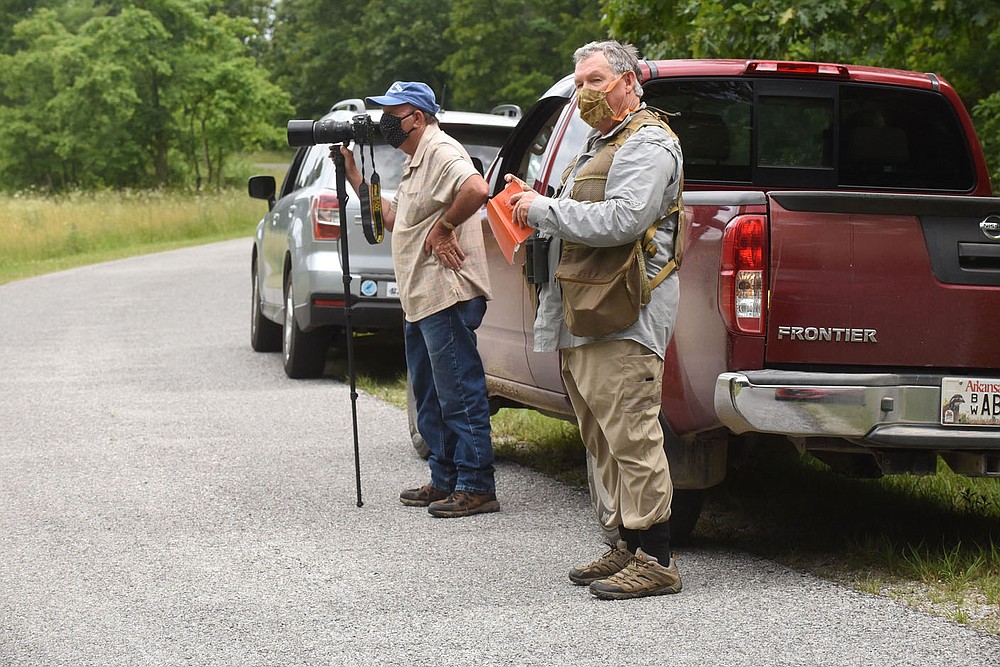 Terry Stanfill (left) and Joe Neal stop June 12 2020 along the tour road to see birds in an open area of the battlefield. (NWA Democrat-Gazette/Flip Putthoff) 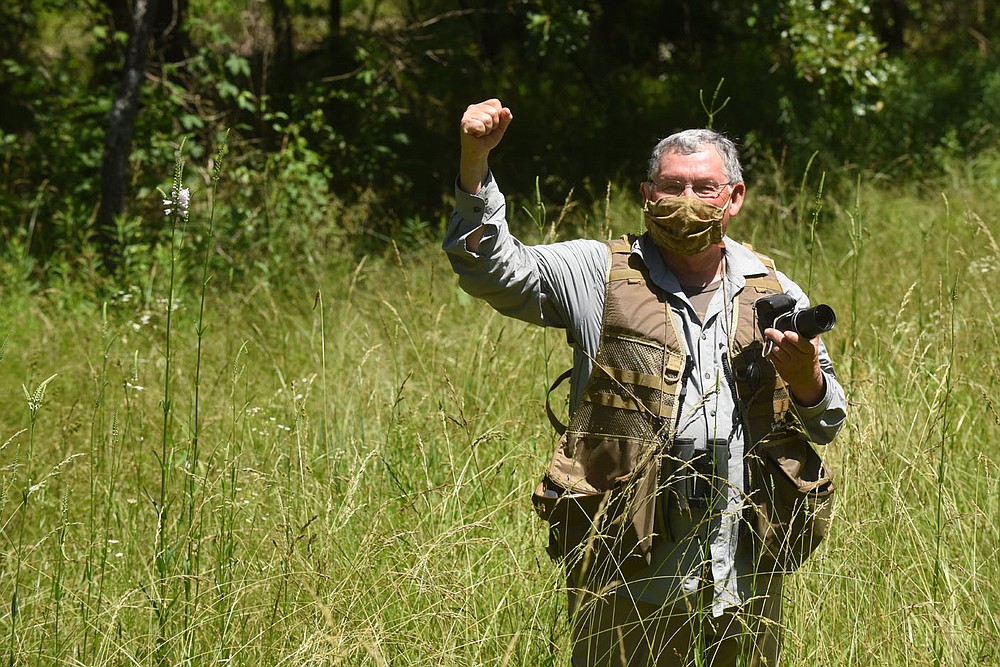 Neal rejoices at seeing a wild turkey to add to his long list of seen seen during a morning bird-watching trip on June 12 2020 to Pea Ridge National Military Park. (NWA Democrat-Gazette/Flip Putthoff) 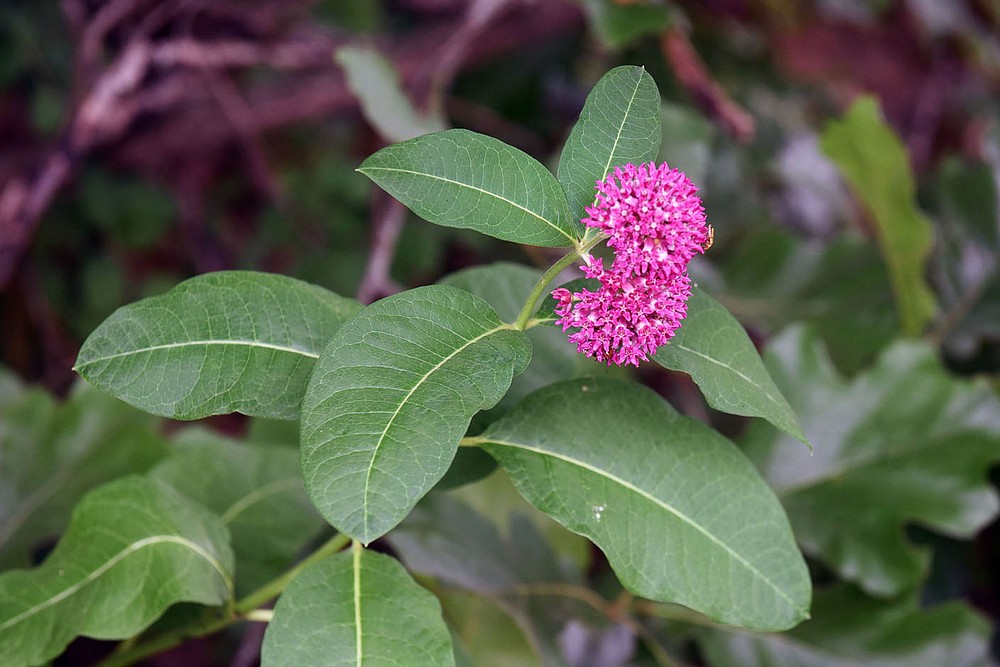 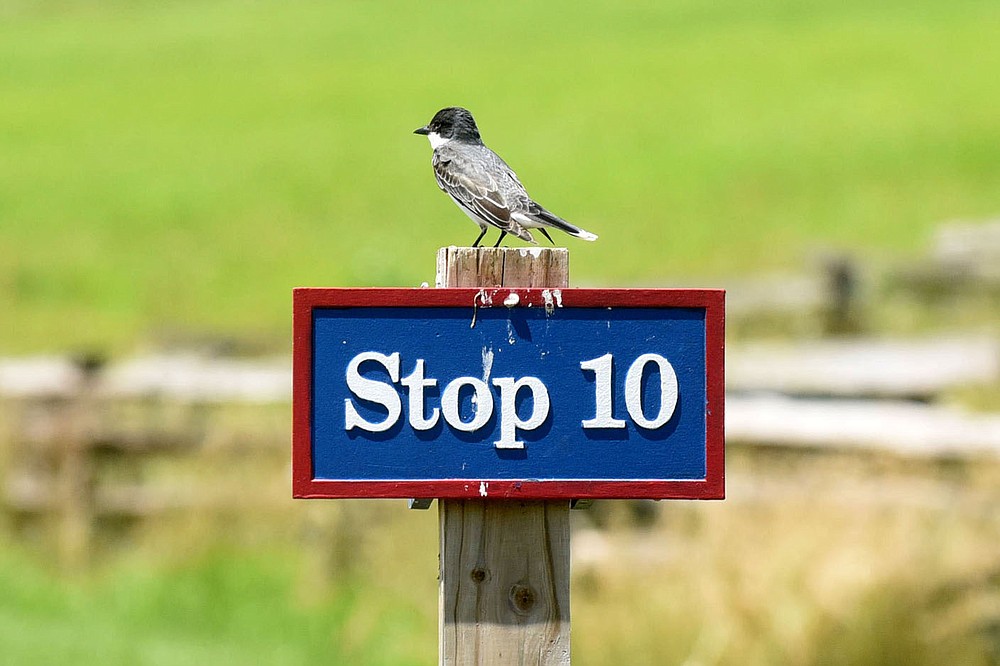 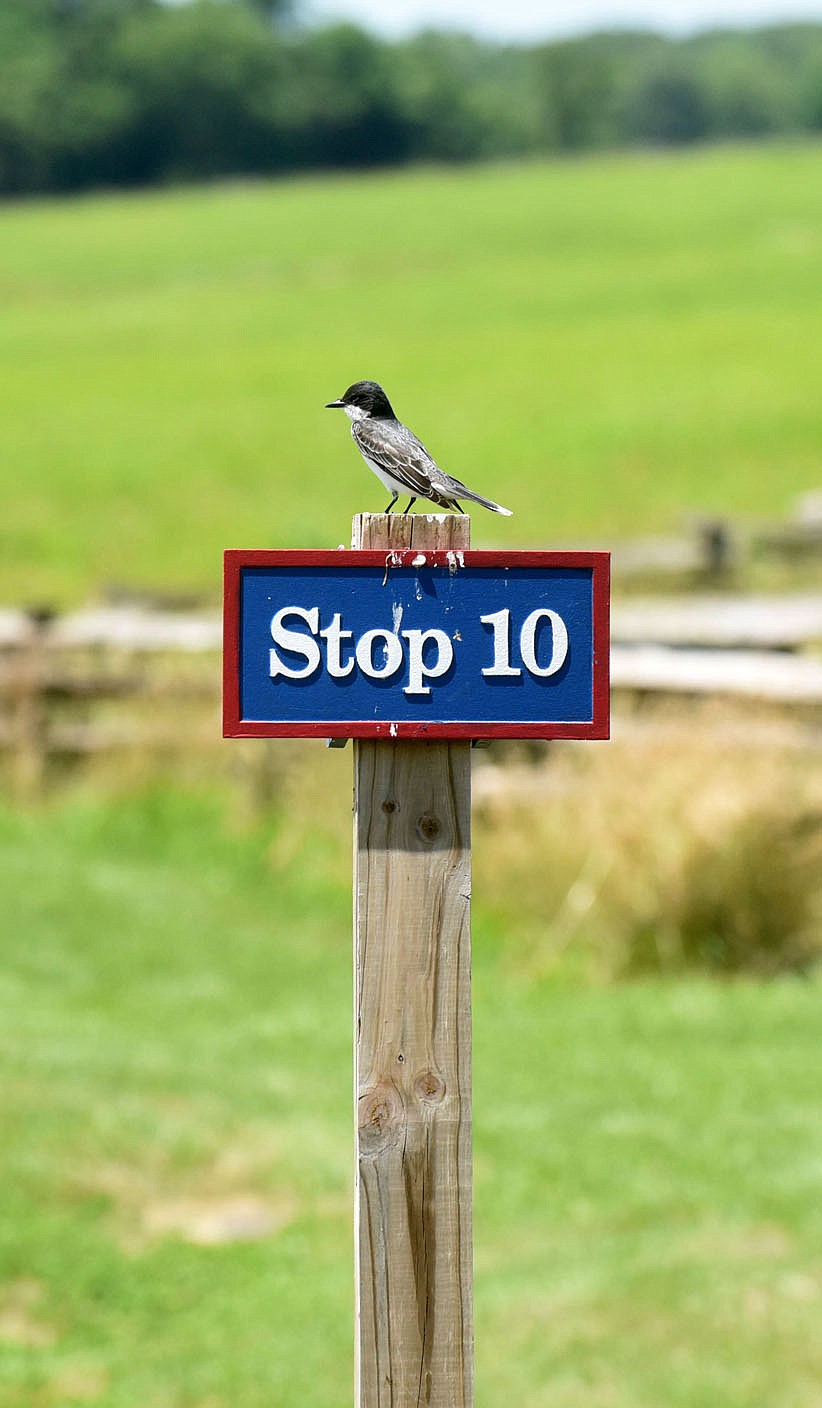 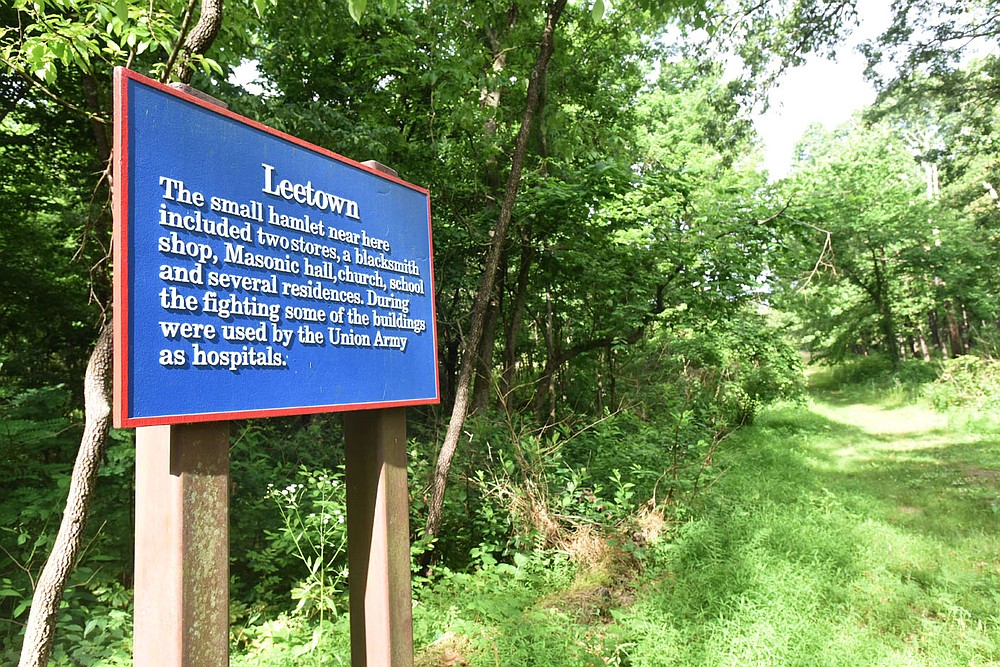 Trails away from the paved tour road take birders June 12 2020 and hikers into areas of the park few people see. (NWA Democrat-Gazette/Flip Putthoff) 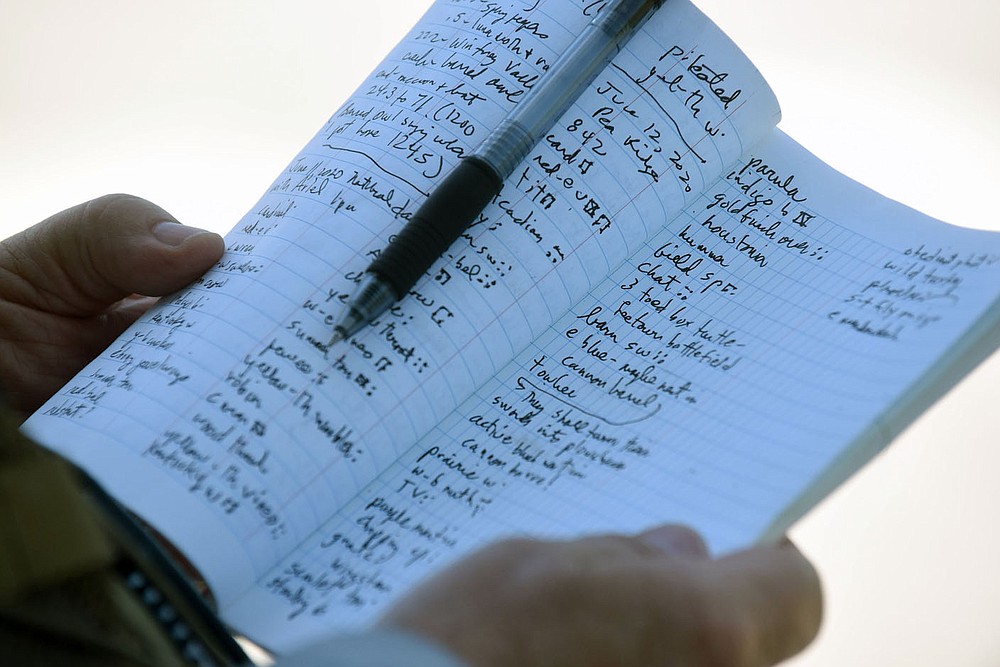