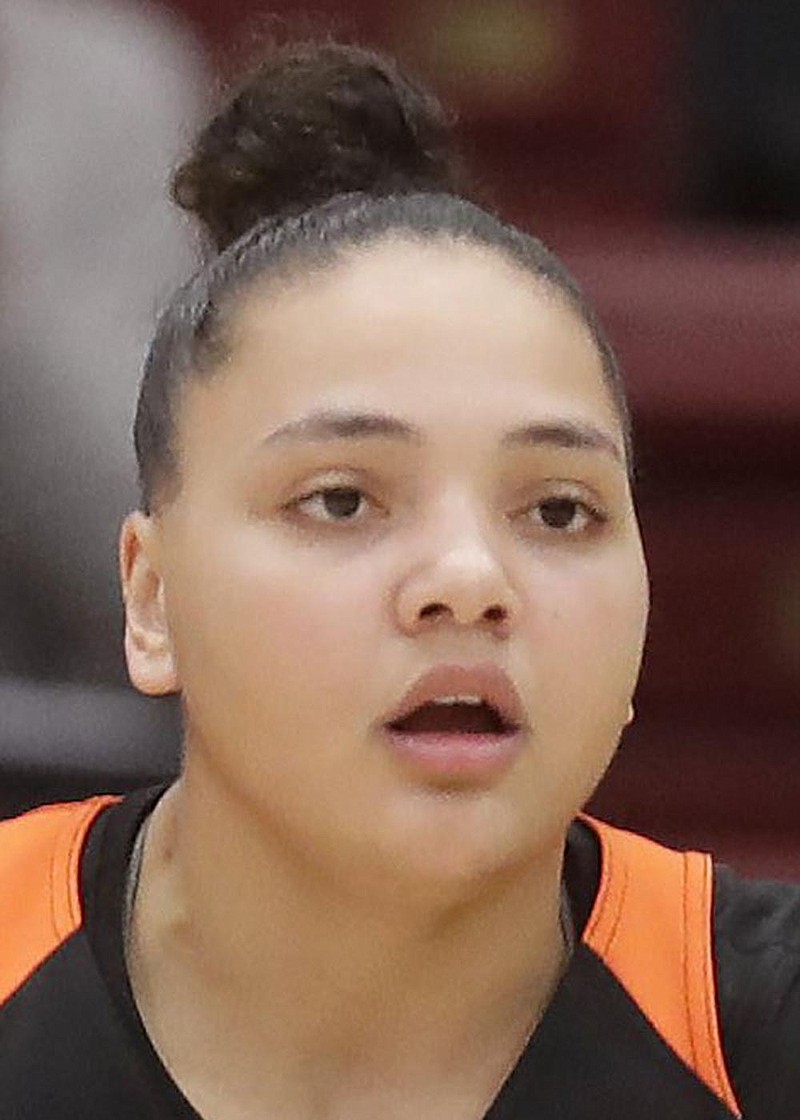 University of Arkansas graduate transfer Destiny Slocum was drawn to the Razorbacks because of her previous relationship with Coach Mike Neighbors as well as the brand of basketball the team plays. (AP/Jeff Chiu)

To someone who does not follow the Arkansas Razorbacks, the Hog call might seem strange, but it is intriguing to graduate transfer guard Destiny Slocum.

"The Hog call, that thing looks super interesting. I'm excited to do that," Slocum said.

While calling the Hogs may be unfamiliar for Slocum, her new women's basketball coach at the University of Arkansas won't be. While at Mountain View High School in Meridian, Idaho, Slocum originally committed to Mike Neighbors, then the head coach at Washington. She still remembers Neighbors and four other coaches showing up to her high school games.

"I always felt a super great connection with him, about him caring about me and wanting what's best for me, but also wanting to make me the best player I can be," Slocum said. "I've always really admired that about him."

She was the first McDonald's All-American from her state, and the first player from Idaho to go to the Jordan Brand Classic game. Slocum also was ranked the No. 4 prospect by ESPNW's Hoop Gurlz.

"I always felt like I was the person that was defying all the odds," she said. "I mean, a lot of firsts were coming. I was paving a way for a lot of younger Idaho youth -- men and women -- who really see themselves in Division I basketball, and hopefully the WNBA."

Slocum de-committed from Washington and decided to play at Maryland in the spring of 2015.

"I think at the moment Maryland, to me, was the best option as a program," she said. "Also, being from Idaho, I wanted to get away from the West Coast, too."

She then transferred to Oregon State.

"There is a bunch of information out that says I left Maryland just because of the fact that I wanted to be closer to home, but none of that was true," she said.

Adjusting to Oregon State's slower style of play took some time. Slocum felt as if she had to update her game in the half court.

"Her first year at Oregon State was a little bit of a rough start, just kind of fitting into a different system," Steve Gress, sports editor for the Corvallis Gazette-Times, said of Slocum. "It's one that I don't think allows the point guard to do a lot all the time."

Slocum still managed to lead the team in points per game (15.5) and assists (153) in her first year in Corvallis.

The next season, Slocum again led the team in scoring (14.9) and assists (150), highlighted by a career night against Stanford.

"The two Stanford games this year, she looked like she could be the best player on the floor for either team," Gress said. "To see her put up over 25 in each of those games shows the potential she has to be a pretty dominant scorer against some pretty good teams."

Slocum went for career highs in points (26), minutes (38), field goals made (11) and three-pointers made (4) in Oregon State's game at Stanford.

Gress said Slocum is a good facilitator who can also make things happen off the dribble.

"She's not afraid to take it to the basket and try to draw some contact," Gress said. "I think that she has a mindset that if you allow her to, she'll go out and want the ball in her hands to create something either for herself or for a teammate in crucial situations."

Slocum was drawn to Arkansas because of her previous relationship with Neighbors as well as the brand of basketball the Razorbacks play.

"The tempo would be the No. 1 thing," Slocum said. "Other than that, I think just the ability that [Neighbors] lets you be a player. Just the fact that he has so much trust in his players and trusts them to make decisions on the court."

There was also an academic reason why she chose Fayetteville.

"I think for me, one of the biggest things was education, and one thing is OSU couldn't offer me the education or graduate school that I wanted," Slocum said.

Slocum, a sports management and recreation major, will be the first person in her family to go to graduate school, and just the second to graduate college.

Whatever happens in her last year on the basketball court, Slocum is happy it will take place at Arkansas with Neighbors.

"I think giving my all and giving everything I've got to contributing to the amazing progress that Coach Neighbors and the rest of the team has made to making Arkansas one of the best women's basketball programs in the nation," Slocum said. "I'm excited to be able to play in Bud [Walton Arena], and put on an Arkansas jersey.

"Even if it's only for a year, hopefully I can do it proud."