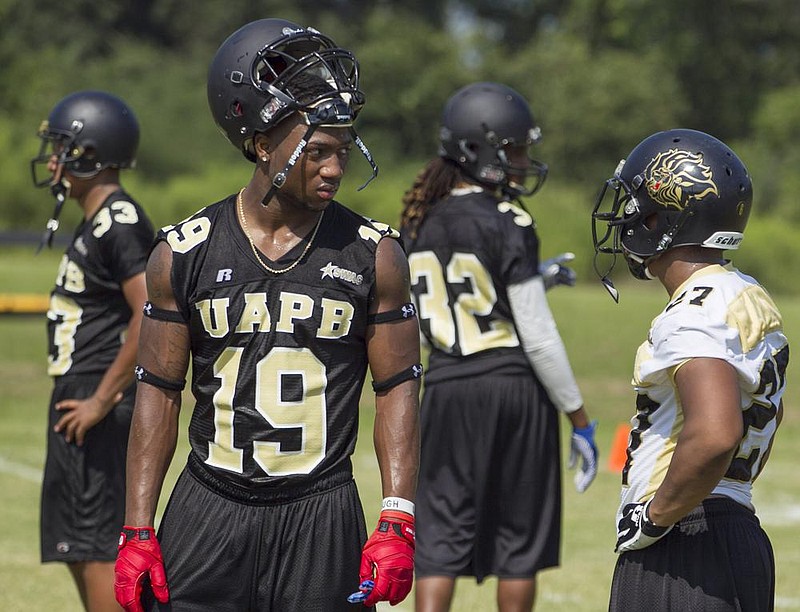 Decision pushes UAPB’s fall sports to spring UAPB football players go through summer drills in 2014. They won’t have the chance to do so this summer after the Southwestern Athletic Conference announced Monday it will suspend all fall sports because of the coronavirus pandemic. (Democrat-Gazette file photo)

There will be no Golden Lions football, soccer, volleyball or cross country this fall.

The University of Arkansas-Pine Bluff's 2020 fall sports seasons have been suspended after the Southwestern Athletic Conference announced Monday it will be postponing all fall sports to the spring because of the coronavirus pandemic.

"The SWAC Council of Presidents and Chancellors felt this action was necessary out of growing concern for the health, safety and well-being both mentally and physically of our student-athletes, coaches, administrators, team staff, campus faculty, fans and supporters," the SWAC said in a statement. "The SWAC shares in the disappointment that will undoubtedly be felt by student-athletes, fans, and supporters impacted by the postponement of fall sports competition."

The SWAC met Monday afternoon in an attempt to weigh all factors in deciding whether to postpone fall sports or not. In a statement, the conference said the decision came after a recent spike in cases across the country, and specifically in the South. Also, the data that "suggests African-American communities have been disproportionately affected by the virus."

The CDC reported in June that Black people are five times more likely to contract covid-19. The SWAC is considered one of the prominent Historically Black College or University conferences in the country.

"Today, the very difficult decision was made by the Southwestern Athletic Conference and the league's Council of Presidents and Chancellors to postpone fall semester competitions due to on-going effects of Covid-19," UAPB Athletic Director Chris Peterson said in a news release. "The safety and well-being of our student-athletes is the top priority of the University of Arkansas At Pine Bluff, as well as for our fellow member institutions and our SWAC leadership."

Across the four sports, 136 UAPB athletes will not get to play this fall with hopes of continuing their season in the spring. Those athletes likely won't be alone as the SWAC is just one of multiple schools to postpone or cancel fall athletics. 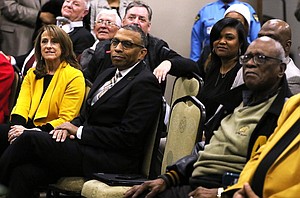 Photo by Thomas Metthe
UAPB Chancellor Laurence Alexander (right) said Monday, “the decision to postpone fall athletics was difficult, but it was the best decision for the SWAC.” (Arkansas Democrat-Gazette/Thomas Metthe)

The conference joins the Mid-Eastern Atlantic Conference, the Patriot League, the Ivy League and others in moving fall sports to the spring. The SWAC said it already has started formalizing plans for fall sports to have a spring schedule.

This includes a seven-game football season that will begin with an eight-week training period starting in January. The season will consist of six conference games, and the option to play one nonconference game. Details for other fall sports will be released at another time.

The Democrat-Gazette reached out to UAPB football Coach Doc Gamble, who did not respond.

"Fall sports teams and student-athletes will have the opportunity to attend classes and practices in preparation for a spring 2021 competitive schedule upon return to campus," the SWAC said in the statement. "Student-athletes will have the ability to participate in conditioning, strength training and practices in all sports provided all required local, state, and federal health and safety guidelines are met. There have been no final decisions made regarding competitive schedules for the league's winter sports at this time."

With no fall sports, UAPB Chancellor Laurence Alexander said he understands the effect it could have on the entire school.

"The decision to postpone fall athletics was difficult, but it was the best decision for the SWAC," Alexander said in a news release. "Athletics is such an important part of the activities, traditions and life of the university and our student athletes. However, our foremost concern must be the health, safety, and welfare of our student athletes."

Whether or not the spring season will actually happen is unknown. For now, the Golden Lions are continuing to hold out hope that football, soccer, volleyball and cross country will be played.

"While we know this brings disappointment to everyone in Golden Lion Nation," Peterson said, "we carry the optimistic expectation of an exciting spring football season and fall sports competitions in 2021."