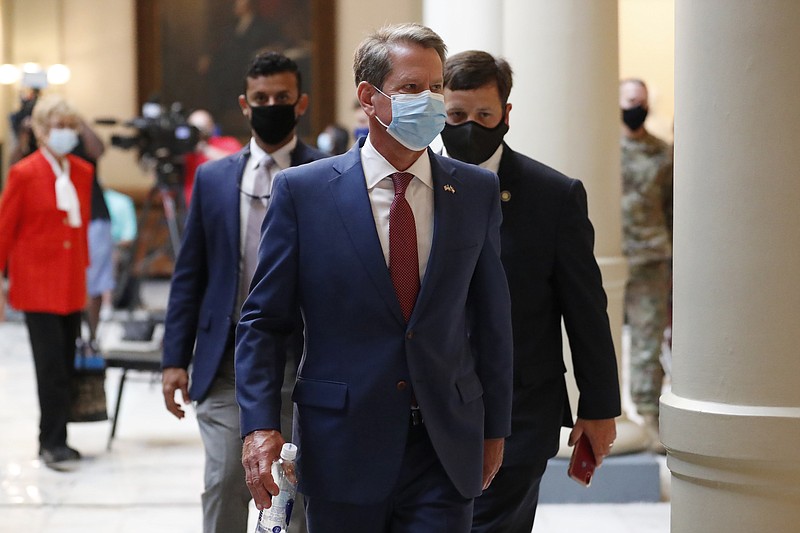 ATLANTA -- After one judge recused herself at the state's request from hearing a lawsuit filed by Georgia's governor over measures taken by Atlanta in response to the covid-19 pandemic, a second stepped aside because she used to work for the governor.

Atlanta is among at least 15 local jurisdictions statewide that has ordered people to wear masks in many public places to prevent the spread of the coronavirus. In a lawsuit filed last week against Atlanta Mayor Keisha Lance Bottoms and the members of the City Council, Georgia Gov. Brian Kemp argues that local leaders do not have the authority to impose measures that are more or less restrictive than those in his executive orders.

Fulton County Superior Court Judge Kelly Ellerbe had scheduled a hearing for Tuesday morning on an emergency motion in the case. But in an order filed less than two hours before it was to begin, Ellerbe said she was recusing herself after consulting with the lawyers in the case by telephone conference and email.

An email exchange attached to Ellerbe's recusal order indicates the judge made a disclosure to the lawyers for both sides Monday afternoon that prompted the state to ask her to recuse.

"This particular case has drawn significant attention at the state and national level, and therefore, we believe for all parties concerned, that even any potential perception of impropriety could be problematic," Deputy Attorney General Julie Jacobs wrote in an email Tuesday morning.

Ellerbe told the attorneys she had spoken to an appellate judge about a prior opinion that might have bearing on the case, the attorney general's office said in an emailed statement. Ellerbe then became concerned about having had the discussion and notified the lawyers in the case.

Lawyers for the city of Atlanta said in an email attached to the order that they had no objection to the judge hearing the case.

The case was reassigned to Fulton County Superior Court Judge Shawn LaGrua. But LaGrua issued an order Tuesday afternoon recusing herself, saying she wanted "to avoid any appearance of impropriety or bias." She noted that she had worked for Kemp as an inspector general when he was secretary of state and has been and remains under consideration for appointments by Kemp.

Attorney general's office spokeswoman Katie Byrd has said the state would seek another emergency hearing on the governor's motion after Tuesday's hearing was canceled because of Ellerbe's recusal.

A pandemic-related executive order issued by Kemp last week strongly encourages but does not require the wearing of face coverings and suspends any local laws or rules that are more restrictive, the lawsuit says. Bottoms and some other mayors responded by saying they would continue to enforce local mask mandates.

Bottoms' orders and statements to the press have created uncertainty and confusion, the lawsuit says.

The lawsuit asks a judge to overturn Bottoms' orders that are more restrictive than Kemp's, block her from issuing any more such orders, instruct the City Council not to ratify Bottoms' actions or adopt any ordinances inconsistent with Kemp's orders, to prohibit Bottoms from making public statements asserting she has authority that exceeds Kemp's, and to require city officials to enforce "all provisions" of Kemp's existing orders.

The governor filed a motion for emergency interlocutory injunction the following day, essentially asking the judge to order that all those requests take immediate effect while the lawsuit is pending. Tuesday's hearing was to focus on arguments on that motion.

The board of commissioners of DeKalb County, which includes part of Atlanta, on Tuesday approved an amended mask ordinance that requires people over 8 years old "to utilize a face covering or mask which covers the nose and mouth when in any public place," according to a news release. County CEO Michael Thurmond says the amended ordinance is "consistent" with Kemp's executive order, the release says.

The ordinance says a written warning will be issued for the first violation, while a second violation will require attendance in a covid-19 prevention class, the release says. Failure to attend the class is punishable by a $250 fine.

The DeKalb County mask ordinance includes a "conscientious objector" clause to exempt anyone from the penalty if they present a sworn statement in court that says they won't wear a mask for health, religious or ethical reasons. 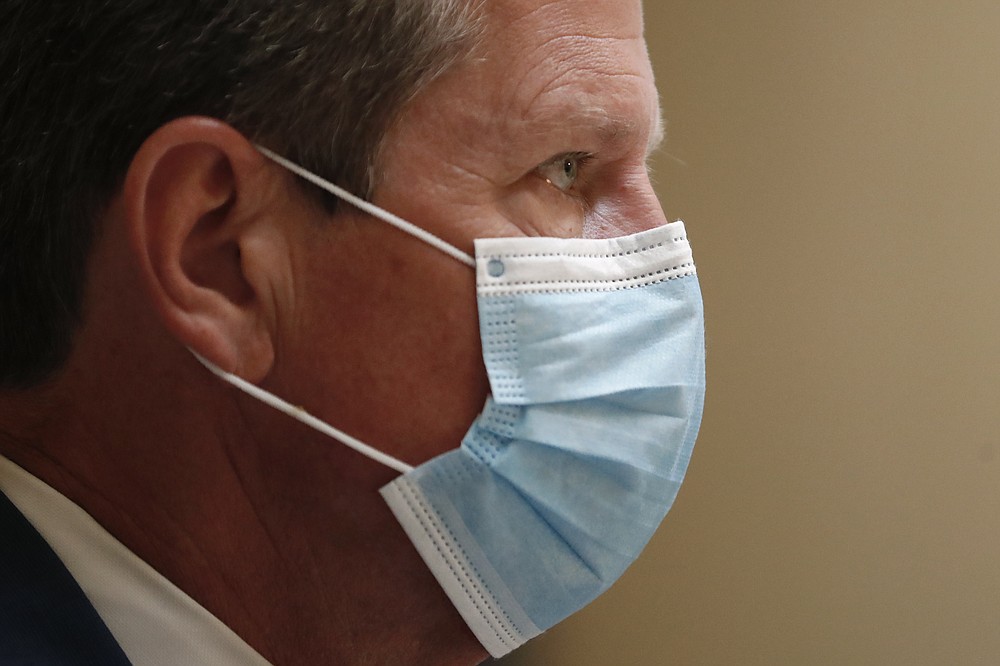 Georgia Gov. Brian Kemp looks on during a coronavirus briefing at the Capitol Friday, July 17, 2020, in Atlanta. Kemp sued the city of Atlanta over its face-mask requirement just after President Donald Trump arrived in the city without wearing a mask, Mayor Keisha Lance Bottoms said Friday. (AP Photo/John Bazemore)
ADVERTISEMENT