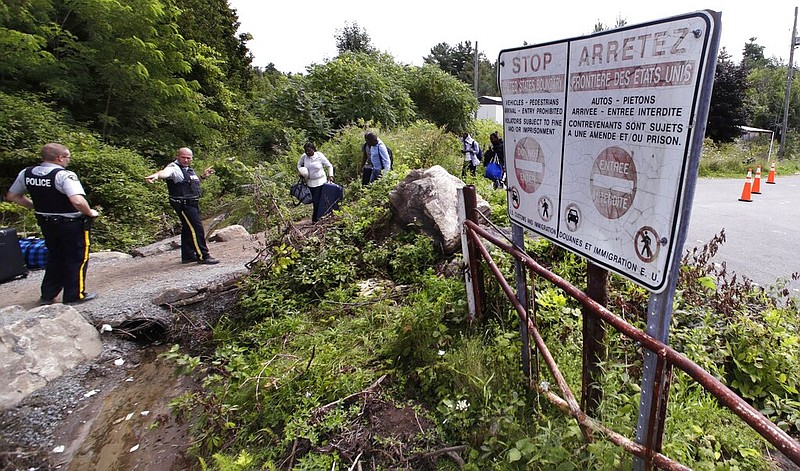 Royal Canadian Mounted Police officers greet migrants as they enter into Canada at an unofficial border crossing at the end of Roxham Road in Champlain, N.Y., in this Aug. 7, 2017, file photo. A Canadian court on Wednesday, July 22, 2020, invalidated the country's Safe Third Country Agreement with the United States, under which migrants who want to seek asylum in Canada at ground ports of entry from the United States were returned to the U.S. and told to seek asylum there.

A Canadian court on Wednesday invalidated the country’s Safe Third Country Agreement with the United States, ruling that elements of the law violate Canadian constitutional guarantees of life, liberty and security.

But Federal Court Justice Ann Marie McDonald delayed the implementation of her decision for six months, to give the Canadian Parliament time to respond.

“I conclude that the provisions enacting the [Safe Third Country Agreement] infringe the guarantees in section 7 of the Charter,” McDonald wrote in her decision, referring to the Canadian Charter of Rights and Freedom, part of Canada’s Constitution. “I have also concluded that the infringement is not justified under section 1 of the Charter.”

Under the agreement, migrants who want to seek asylum in Canada and present themselves at ground ports of entry from the United States are returned to the U.S. and told to seek asylum there.

But if they request asylum on Canadian soil at a location other than an official crossing, the process is allowed to go forward. In most cases, the refugees are released and allowed to live in Canada, taking advantage of generous social welfare benefits while their asylum applications are reviewed, a process that can take years.

The original legal challenge cited the widespread detention of asylum seekers who are turned back from Canada and the separation of parents and children as other examples of why the U.S. is not a “safe” country for newly arrived migrants.

Mary-Liz Power, a spokesperson for Canada’s Public Safety Minister Bill Blair, said they were aware of the decision.

“Although the Federal Court has made its ruling, that decision does not come in effect until January 22nd 2021,” Power said in a written statement. “The Safe Third Country Agreement remains in effect.”

On Wednesday, the three groups that filed the lawsuit said they welcomed the decision and urged the government of Canada not to appeal. The groups also urged Canada to stop returning refugee claimants to the United States immediately.

“The Safe Third Country Agreement has been the source of grave human-rights violations for many years, unequivocally confirmed in this ruling,” said Alex Neve, secretary general of Amnesty International Canada, one of the groups that brought the lawsuit. “That cannot be allowed to continue one more day.”

An email sent to the U.S. State Department in Washington seeking comment was not immediately returned.

A former U.S. Department of Homeland Security attache in Ottawa who helped work on the details of the implementation of the agreement said the ruling mostly criticizes the Canadian government for sending asylum seekers to the United States in a way that violates the Canadian charter.

“It certainly is a broad criticism of the U.S. policy of detention of asylum-seekers,” Theresa Brown, now director of immigration and cross border policy at the Bipartisan Policy Center in Washington, said in a Wednesday email.

Since Trump took office in 2017, tens of thousands of people have crossed into Canada at locations between ports of entry where they were arrested, but then able to file a refugee claim.

Many of those migrants who came to the U.S. from across the globe — Syria, Congo, Haiti and elsewhere — would travel to upstate New York and then go to Roxham Road in the town of Champlain, a backroad that dead-ends at the border. There they walked across, were arrested and usually released, hoping Canadian policies would give them the security they believe the political climate in the United States does not.

Under special rules set up by the United States and Canada to cope with the covid-19 pandemic most who cross illegally in either direction are now immediately returned to the other country.

The organizations that filed suit argued that if the agreement is abandoned, it would allow Canada to meet its legal obligations for the treatment of asylum seekers and allow people to present themselves at ports of entry, ending irregular crossings.