WHO team in Beijing to hunt illness source, meets roadblocks right away by JAVIER C. HERNANDEZ AND AMY QIN THE NEW YORK TIMES | July 22, 2020 at 4:01 a.m. 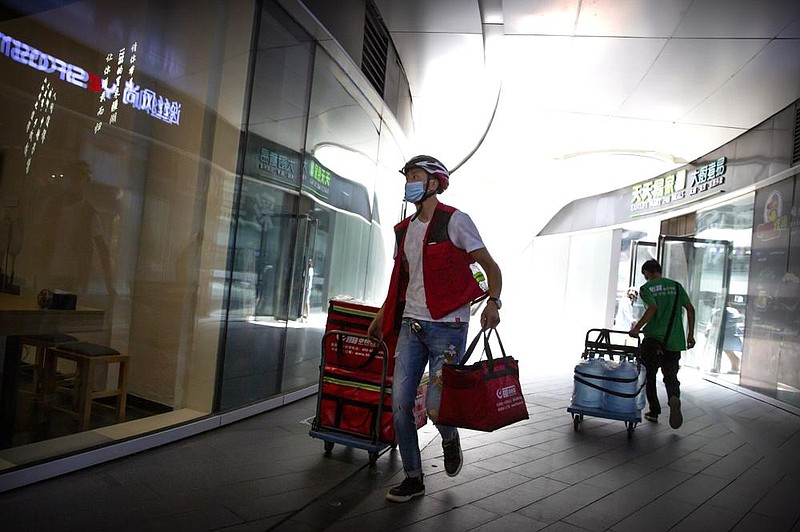 Mask-wearing couriers make deliveries Tuesday at a shopping and office complex in Beijing. China is facing a global backlash for initially downplaying and failing to contain the coronavirus. (AP/Mark Schiefelbein)

Chinese officials are hailing a visit by a team of experts sent to Beijing by the World Health Organization to investigate the source of the coronavirus as evidence that the country is a responsible and transparent global power.

The investigation by the WHO is likely to take many months.

For starters, there are logistical headaches. China has placed the advance team of experts who are laying the groundwork for a broader investigation under a standard 14-day quarantine, forcing it to do some of its detective work from a distance.

"Obviously the arrival and quarantine of individuals and working remotely is not the ideal way to work, but we fully respect the risk-management procedures put in place," Mike Ryan, the WHO's chief of emergency response, said at a news conference Friday. He said it would take weeks before a full team would be able to visit China.

The WHO's investigation comes as China faces global backlash, including from the United States, for initially downplaying and failing to contain the virus, which emerged in December in the central Chinese city of Wuhan.

For weeks, China had resisted demands from other nations that it allow independent investigators onto its soil to study the origin of the pathogen. Beijing has also tried to deflect blame by suggesting that the virus could have originated elsewhere.

Now, officials are trumpeting Beijing's response to the outbreak as a model for the world and attacking the United States for "shirking its responsibilities" in the global fight against covid-19.

The Trump administration has criticized the WHO's inquiry. Secretary of State Mike Pompeo recently said he expected it to be a "completely whitewashed investigation."

With relations between China and Western countries deteriorating rapidly over military, technology, trade and human rights concerns, experts worry that Beijing will seek to limit the scope of the research so it does not embarrass the government.

"The whole political landscape is not favorable to doing an unbiased scientific investigation," said Wang Linfa, a virologist in Singapore who took part in a similar WHO study in China during the severe acute respiratory syndrome epidemic in 2002 and 2003. "I feel sorry for the team members."

The Chinese government initially covered up the SARS outbreak, but Wang said it was later eager to cooperate with the international experts. This time, he said, the WHO's investigation was likely to be largely symbolic because the broader geopolitical climate could make Chinese experts unwilling to share valuable research.

Chinese officials have provided little data from samples that the Chinese Center for Disease Control and Prevention took in December at the Huanan Seafood Market, a sprawling market in Wuhan that sold game meat and live animals, where many of the first reported infections were traced. The market has since been closed and scrubbed down.

The WHO's inquiry is focused on the question of how the disease jumped to humans from animals. The advance team is made up of an expert in animal health, as well as an epidemiologist. The team members, who arrived in mid-July, have not yet been identified and have not spoken publicly.

Ryan said Friday that the health organization was "very pleased with the collaboration on the ground." He said earlier in the month that the experts would not do field investigations but would meet with Chinese officials and researchers to review the available data and outline the scope of the inquiry.

"It is our contribution to global public health cooperation as a responsible major country," Zhao Lijian, a spokesman for the Chinese foreign ministry, said this month at a news conference.

Zhao called on the United States to allow a similar investigation, even though there is no evidence the virus originated in America.

Officials from the WHO have said Wuhan is the best starting point for scrutinizing the animal origin of the virus because it was where the first clusters of the outbreak emerged in humans. But they remained open to other lines of study, as well.

"We have to keep an open mind," Ryan said at a news briefing this month. "Science must stay open to all possibilities."