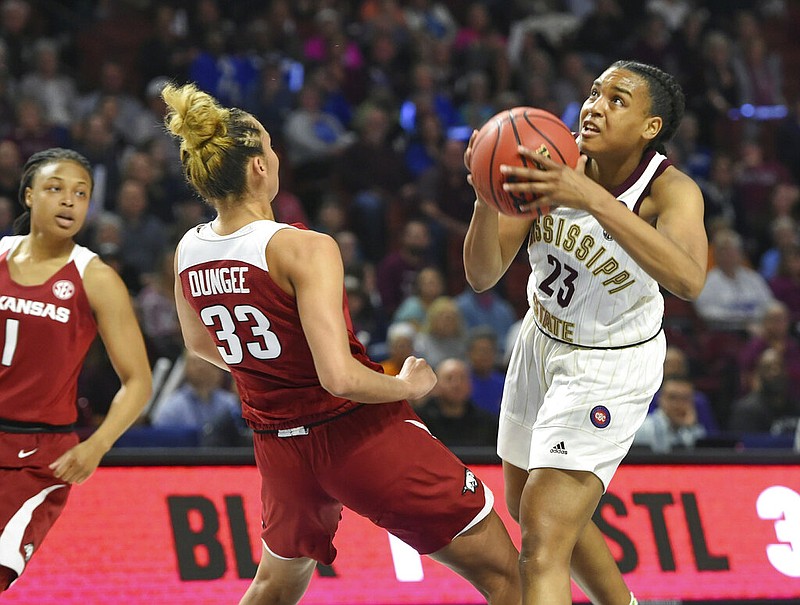 Bre'Amber Scott (23), then of Mississippi State, drives against Arkansas' Chelsea Dungee (33) during the first half of an NCAA college basketball championship game in the Southeastern Conference women's tournament in Greenville, S.C., in this March 10, 2019, file photo. Scott, a graduate of Little Rock Central High School, transferred to the University of Arkansas at Little Rock in the spring and has been cleared to play for the team in the 2020-21 season.

The University of Arkansas at Little Rock women's basketball team has a new addition after it was announced Wednesday that Mississippi State transfer Bre'Amber Scott received an NCAA waiver to compete in the 2020-21 season.

Scott, a graduate of Little Rock Central High School, transferred to UALR in the spring after two seasons at Mississippi State. During her time with the Lady Bulldogs, Scott averaged 4.9 points per game, including a 20-point performance in the 2018-19 SEC Championship game. She shot 45.7% from the field, 37% from beyond the arc and 70% from the free throw line. She also totaled 70 rebounds, 40 assists and 33 steals.

"I am both excited and thankful the NCAA granted Bre'Amber her waiver to compete immediately," UALR head coach Joe Foley said in a press release. "She will make an immediate impact on our program, and we are glad that she is able to return home, attend her hometown university and represent for her hometown team."

Scott brings some much-needed experience to the Lady Trojans, who will have five true freshmen and one senior in 2020-21. UALR's 2020-21 schedule has yet to be released.