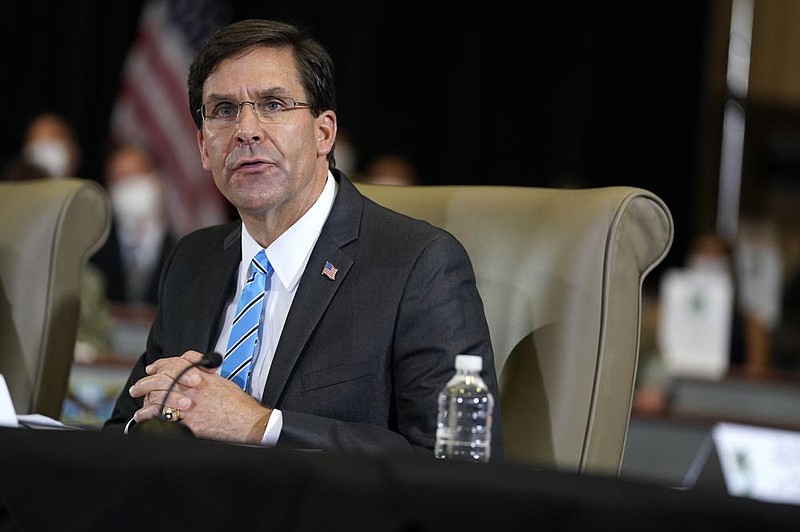 WASHINGTON -- The Pentagon is considering "adjustments" to its military presence in South Korea and around the globe as it shifts from years of countering insurgencies and militants in the greater Middle East to focusing on China, Defense Secretary Mark Esper said Tuesday.

Esper said he has issued no order to withdraw from South Korea.

Without discussing specifics, Esper said he favors more emphasis on rotational deployments, as opposed to permanent stationing, of American troops "because it gives us, the United States, greater strategic flexibility in terms of responding to challenges around the globe."

Esper's chief spokesman, Jonathan Hoffman, said later the goal of shifting to more use of rotational forces in Asia and Europe would be to "remove some of the footprint of having forces forward deployed" and allow troops to train in additional locations, "instead of being in one country all the time." He said it also would allow the U.S. to be "a little bit more unpredictable."

The U.S. has about 28,500 troops stationed in South Korea as a bulwark against North Korea, but the U.S.-South Korea treaty alliance is under strain, mainly because of the Trump administration's demand that Seoul increase the amount it pays for the U.S. presence. Negotiations led on the U.S. side by the State Department have been deadlocked for months.

The Pentagon said Esper spoke by phone Monday with his South Korean counterpart to discuss the payment issue and other matters, including the stalemated U.S. effort to rid North Korea of its nuclear weapons. It gave no details.

President Donald Trump has questioned the value of stationing U.S. troops in South Korea and elsewhere in the world, saying Seoul and other host governments must pay more of the cost.

Earlier this month, Esper approved the withdrawal of 9,500 troops from Germany, although he has yet to publicly disclose how many of those will be brought home and how many will be shifted to other parts of Europe or elsewhere. He also has reviewed the U.S. presence in Africa.

"We will continue to look at adjustments in every command we have, in every theater, to make sure we are optimizing our forces," Esper said in Tuesday's webinar.

The U.S. military presence in South Korea dates to the 1950-53 Korean War in which American forces fought in support of the South after North Korean troops invaded and were later supported by Chinese troops.

Pentagon officials have said that the "repositioning" of forces around the world -- in large part to confront China -- is part of a comprehensive and long-overdue review of all U.S. overseas deployments expected to be completed in September.

Indications earlier this year that downsizing was likely in Africa, where U.S. forces are fighting militant groups, brought howls of congressional disapproval and warnings of Islamic State and al-Qaida expansion there.

Military officials have long been expecting the U.S. troop footprint in the Middle East and Afghanistan to shrink at least modestly because of a trio of factors: a reduced Islamic State, a hoped-for political settlement in Afghanistan and, perhaps most important, Trump's desire to reduce U.S. involvement in insurgent conflicts.

But critics have warned that a reduced U.S. presence would conflict with the administration's pledge to continue "maximum pressure" against Iran.

The first phase of the February U.S.-Taliban agreement -- a downsizing of the American force in Afghanistan to 8,600 -- has now been completed, eliminating the force expansion Trump authorized in 2017. The agreement envisions a full U.S. departure by the end of April, providing that the militants meet their commitments to reduce violence and embrace negotiations with the Afghan government.

The Pentagon has drawn up plans to reach a "waypoint" in its own compliance with the deal, perhaps by late fall, by withdrawing another 4,000 troops. But the required Taliban and Afghan government progress in implementing the political aspects of the agreement has slowed, and violence is on the rise.

Trump has often said that he is treated unfairly. "I am the only person who can fight for the safety of our troops and bring them home from the ridiculous & costly Endless Wars, and be scorned," he tweeted in October. "Democrats always liked that position, until I took it."

Information for this article was contributed by Robert Burns of The Associated Press; and by Karen DeYoung, Missy Ryan, Michael Birnbaum, Simon Denyer and Dan Lamothe of The Washington Post.