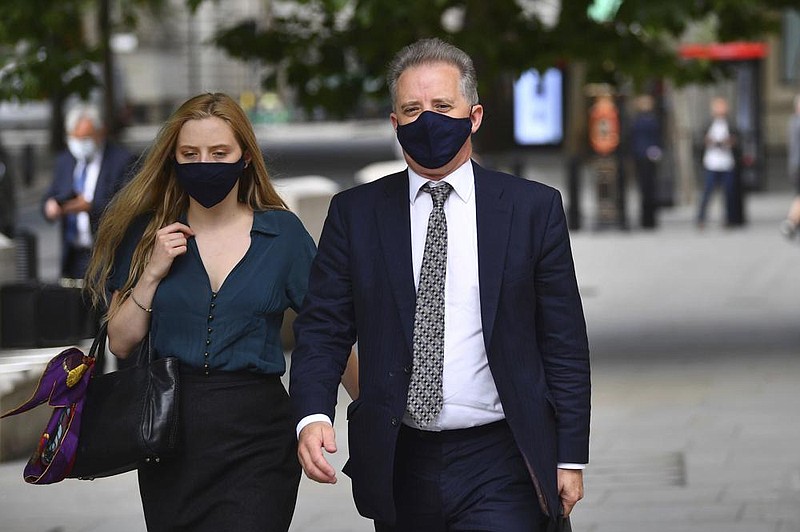 Christopher Steele, a former British spy, leaves the High Court in London on Wednesday after a hearing in the libel suit filed against his corporate intelligence firm. (AP/Victoria Jones)

The former British spy who wrote the much-disputed "Steele Dossier" told a British court that President Donald Trump may have posed a serious risk to U.K. national security.

The information recorded in a preelection memo into alleged Russian interference in the 2016 U.S. presidential election produced by his firm, Orbis Business Intelligence Ltd., "had important national security implications for the U.K., as well as the U.S.," Christopher Steele said in a court filing for a London libel trial.

The contents of that document suggested that "Trump and his administration might pose a serious risk to U.K. national security in relation to the receipt of sensitive intelligence from British sources and operations, especially sources/operations in or in relation to Russia," he said in his witness statement.

Steele is being cross-examined as part of a libel suit filed against his firm by Aleksej Gubarev, a Russian technology entrepreneur whose company was named in the dossier. Steele lost a separate libel suit earlier this month, after a London judge ruled a central allegation in his dossier was "inaccurate and misleading."

Steele was employed by a Washington-based research firm, Fusion GPS, in June 2016 to examine Trump's links to Russia. The Democratic National Committee and the campaign of Hillary Clinton hired Fusion after Trump was headed for the nomination.

Steele said he felt "duty bound" to report the contents of the memo to U.K. national security authorities after Trump's 2016 election. He met with a senior British security official less than a week after the vote at the official's London home, where he handed over a copy of the preelection document, he said.

The close relationship between the countries meant "any serious security breach on one side, particularly relating to a sophisticated and capable counter-intelligence opponent like Russia, is a potential threat to the assets and capabilities of the other," Steele said in his filing.

The official later told Steele that the information had been given to higher-ranking government officials, and asked him to provide any further intelligence, Steele said Wednesday.

In December 2016, Steele told his contact about a separate document his company produced for the "sole purpose" of having U.S. and U.K. authorities verify the contents to protect their national security. The U.K. official "regarded the matter as so important" that they visited his firm's office to collect a copy, he said.

The testimony comes after a long-awaited U.K. parliamentary inquiry into Russian influence found the British government had "actively avoided" looking into interference in the 2016 Brexit referendum. The U.K. only "belatedly realized the level of threat which Russia could pose" after a so-called hack and leak operation against the Democratic National Committee in the 2016 U.S. election, it said.

Steele gave evidence to the committee and published his own strategic assessment Tuesday. He said "this government perhaps more than its predecessors is reluctant to see [or act upon] intelligence on Russian activities when this presents difficult wider political implications."

Although Steele said his report was initially handled appropriately by senior British intelligence professionals, top political officials took no action, and no inquiries were made on the substance of the allegations, he said.