Drugs, thrills, God and some civilization 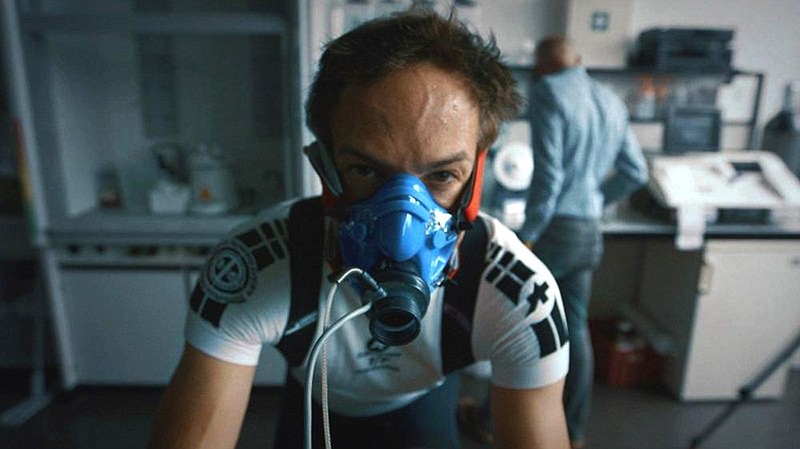 Standup comic, actor and racing cyclist Bryan Fogel had an idea for a “Super Size Me” movie about doping in sports — it turned into “Icarus,” an expose of the Russian Olympic doping scandal.

Fogel, a high-ranking amateur cyclist, had an initial concept that involved him deliberately doping himself months before the prestigious amateur Haute Route bike race in the Alps, while being strictly scientifically monitored, and then to see if he could use modern obfuscation techniques to avoid detection. To aid him in this endeavor, he eventually landed upon Grigory Rodchenkov, the director of Moscow's biggest and most prestigious anti-doping lab, who enthusiastically helped him design his doping protocol, and designed a system of urine-testing to scientifically monitor his progress.

The first part of the film then concerns the amiable Fogel doping himself daily and training rigorously for the race. But his timing proves unwittingly prescient. After he and Rodchenkov travel to each other's respective cities, and spending enough time together to become genuine friends, the initial reports about Russia's systematic doping during the Olympic games becomes public, and Rodchenkov's lab is thrown into tumult as a result, with high-level Russian operatives scuttling for cover and looking for fall guys to blame it on. With nowhere else to go, and fearing for his life -- especially after his good friend and colleague is found dead after a "massive heart attack" -- Rodchenkov slips out of the country and stays in a hidden apartment in L.A., with Fogel's help.

Eventually, Rodchenkov agrees to be interviewed by Fogel for the film, which has now taken a complete left turn from its humble "Supersize Me"-like ambitions. What he says then, for the record, and backed by a mountain of evidence he stashed with him on his trip to the States, is even more explosive and damning: Not only were Russians doping in the 2008 Olympics, as previously alleged, but, in fact, have been doping for every Olympic games since 1968, including the 2018 Winter Games held in Sochi.

The story hits The New York Times, Putin and his ministers deny everything, and Rodchenkov is forced to go into U.S. witness protection in order to stay clear of would-be Russian assassins. The film makes good use of George Orwell's "1984," one of Rodchenkov's favorites, alluding time and again to the text, which supposes a twisted dictatorship where truth and logic are turned on their side ("War Is Peace," "Freedom Is Slavery," "Ignorance Is Strength") in order to keep the current government in perfect control of its dominion. Most damning is how this scandal eventually plays out -- with Rodchenkov's supreme sacrifice, having left his life and family behind in order to finally speak the truth -- proving, as if we needed any further example, that the more corrupt your world leaders become, the better they can quash any opposition to their reprehensible decimation of the truth.

2 "Crawl" (2019): The film may have been made by Alexandre Aja, but it has the vibe and extant DNA of one of its producers, Sam Raimi, a legendary figure in horror circles for his cheekily subversive "Evil Dead" series.

Raimi was a master of mixed tonal sweeps -- for much of "Evil Dead 2," the scares are plentiful, but they are mixed with enough visual puns, wink-wink jokes, and gleefully over-the-top gore sessions, to let ribald viewers know he was more than in on the joke. Aja's film, written by brothers Michael and Shawn Rasmussen, isn't on that sort of level -- it's pretty far from camp -- but there are plenty of jokes amid the alligator-spawned carnage. To begin with, a film called "Crawl" begins with a swimming practice relay (naturally, using the titular stroke) at the University of Florida (whose sports teams are the "Gators").

One of the swimmers, a fiery competitive sort named Haley (Kaya Scodelario), is concerned for her divorced father, Dave (Barry Pepper), alone downstate and not answering his phone in the advent of a hurricane. Against common sense, she grabs her red Jeep (thank you, product placement), and goes to her hometown to try and find him. He turns out to be passed out and wounded in the tight crawl space of their old family home, having been attacked by a gigantic gator, there to cause trouble and, along with its many friends and relatives, eat whatever it can put its massive jaws upon.

Soon, Haley, too, is trapped below decks with her dad, hiding behind pipes to keep from the creatures, even as the flood waters begin to pour into the basement. There, amid an endless gator swarm, and the rising flood, the pair make their stand -- albeit after a quick therapy session in which they seem to reconcile all their past differences in a matter of minutes (amazing what you can accomplish when under duress).

Aja ratchets up the thrills, both cheap (jump scares galore), and slightly more earned (the claustrophobic atmosphere of a drain pipe), along with the silly ironies (her father called Haley an "apex predator" in her early racing days) and also starts piling up the bodies and body parts with a Raimi-like sense of joyous recklessness. The end result makes for a slightly more diverting than expected junky thriller, which works well enough as long as you don't dwell on any of the plot-points, or character logic (the amount of damage these two take would be much more than enough to put them both into catatonia, but they remain undaunted) terribly long. Best of all, the dog lives!

3 "A Serious Man" (2009): You could say physics professor Dr. Larry Gopnik (Michael Stuhlbarg) is going through a bit of a rough patch: His wife, Judith (Sari Lennick), is leaving him for an old acquaintance (Fred Melamed); a disgruntled student (David Kang) is trying to bribe him for a passing grade; his tenure is in question due to anonymous letters denouncing his morality; his son, Danny (Aaron Wolff) on the eve of his bar mitzvah, is smoking dope, and his helpless brother, Arthur (Richard Kind), who has been sleeping on his couch, is running afoul of the law for playing in illegal poker tournaments.

In short, Gopnik is undergoing a crisis of faith, and the Rabbis he turns to are unable to offer him any substantive solace or solutions. In the Brothers' Coen' universe, of course, Gopnik is but one of a long line of set-upon male protagonists, including everybody from H.I. McDunnough to the Dude, all of whom, in the course of their time on screen, go though distinct "rough patches. Like Barton Fink, another despairing, Jewish Coens' protagonist, the world seems to be turning against him.

But unlike Fink, who is filled with his own élan and pompous self-aggrandizement, Gopnik appears to be doing nothing wrong to earn such scornful punishment. He is kind, decent, trying to do the right thing -- and still the forces of chaos connive against him. This is, perhaps, one of the brothers' least enigmatic and most piercing of works in their considerable canon.

The film is funny, to be sure -- their ability to derive cruelly funny pleasure from the torture of their characters is virtually unmatched -- but at the film's core is a far more significant and central question: What are God's signs trying to tell us, and how the hell can anyone interpret them?

In this way, it feels a good deal more personal than some of their earlier works -- which often get criticized for being at too far of an emotional remove. Working along similar lines as the Talmud-like fable that opens the film, the subsequent narrative arc allows for simultaneous arguments for and against the methodology of the higher power. Whatever the case, this quiet film still builds into a startlingly moving crescendo. The Coens' stalwart lack of pity has never been more effective.

4 "Birds of Passage" (2018): It's not like you can't see where this film, about a couple of Indian tribes in northern Colombia who get mixed up in the drug trade in the late '60s, is going. If you've seen virtually any narco-fueled dramas in the last 40 years (or, say, nearly any title of Scorsese's), you know the characters will start with very little, go on to build an empire, and topple themselves with greed, selfishness, and ego, but writer/directors Cristina Gallego and Ciro Guerra add another major element in the narrative, the strict customs of the tribe, the Wayuu, who have built into their culture many sorts of stopgaps to prevent exactly what happens to them.

You can always say money changes everything, but the cost here goes far beyond life and limb: We are watching an entire culture get swept up and then swept away, banished to the sands of time (as the film suggests, without really even leaving a trace).