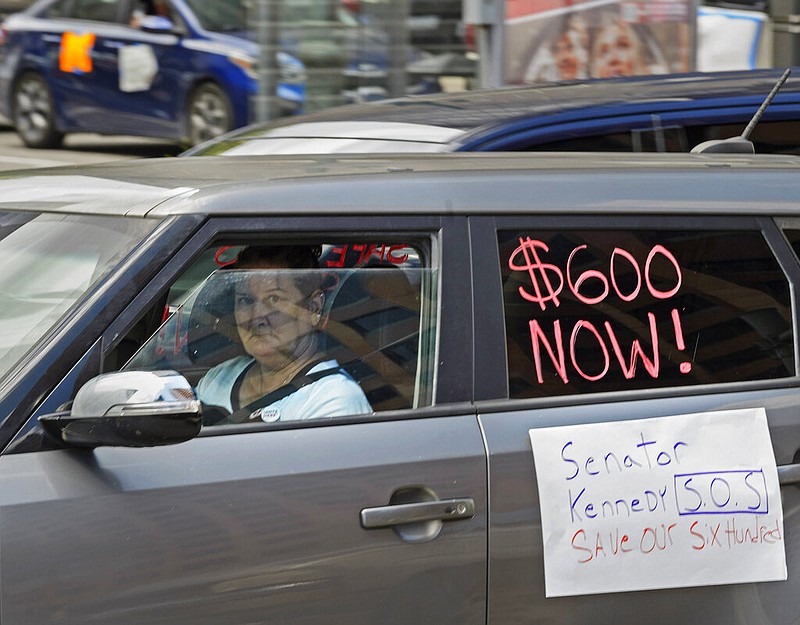 Motorists take part in a caravan protest in front of the office of U.S. Sen. John Kennedy, R-La., at the Hale Boggs Federal Building in New Orleans on Wednesday, July 22, 2020. The motorists were asking for the extension of the $600 in unemployment benefits to people out of work because of the coronavirus. (The Advocate via AP / (Max Becherer )

The upturn, from about 1.3 million in each of the two preceding weeks, comes just days before an extra $600-a-week jobless benefit is set to expire.

An additional 975,000 claims were filed last week by freelancers, part-time workers and others who do not qualify for regular state jobless aid but are eligible for benefits under an emergency federal program, the Labor Department said. Unlike the state figures, that number is not seasonally adjusted.

And an extra $600 in weekly unemployment benefits, provided by the federal government on top of whatever assistance states provide, is set to expire July 31, though this is the last week recipients will get the extra funds. It is the last major source of economic help from the $2 trillion relief package that Congress approved in March. A small business lending program and a one-time $1,200 payment have largely run their course.

It was the 18th straight week that initial unemployment claims topped 1 million.

"I'm going to be broke," said Melissa Bennett, who was laid off from her job at a vacation time-share in Myrtle Beach, S.C. "I'll be broke-broke. I want to go to work, I want health insurance, I want a 401(k). I want a life; I have no life right now."

Without the extra unemployment benefits, Bennett will receive just $200 a week, and she'll have to decide whether to pay her mortgage or her utilities first.

The new economic woes come as virus outbreaks worsen, particularly in the South and West.

The stubbornly high rate of new weekly claims more than four months into the coronavirus pandemic "suggests that the nature of the downturn has changed from early on," said Ernie Tedeschi, a policy economist at Evercore ISI. It may mean that businesses are shutting down again as cases surge in some places, or that funds from emergency federal loans through the Paycheck Protection Program are running out, he said -- or worse, something more fundamental.

"It might be that businesses are running through their first line of credit," he said, "and now they're facing the music of an economy that has recovered a little bit but not nearly enough."

The weakening of the labor market has raised fears the economy will shed jobs again in July, after two sharp hiring gains in May and June.

"At this stage, you're seeing all the wrong elements for recovery," said Gregory Daco, chief U.S. economist at Oxford Economics. "A deteriorating health situation, a weakening labor market and a softening path for demand."

Analysts say the economy can't improve until authorities can control the spread of the virus, a need that is complicating the reopening of businesses and schools.

Adm. Brett Giroir, assistant secretary of health and a member of the Trump administration's coronavirus task force, even suggested another shutdown might be necessary. He noted that nearly universal mask wearing, sharp restrictions on restaurant occupancy, and shutting down bars were nearly as effective in controlling the virus as another shutdown of all nonessential businesses.

"Now, if you don't do that, and people don't achieve those goals, particularly mask-wearing, there may be no alternative," Giroir said on MSNBC.

Congress is negotiating another aid package that could extend the extra unemployment support, though likely at less than $600. With the extra $600, roughly two-thirds of the unemployed are receiving more in aid than they earned at their former jobs, research has shown -- a finding that's led Republicans to argue that it is discouraging people from returning to work.

July claims normally have seasonal swings as automakers shut down to tune equipment, a trend that was generally absent this year as companies closed early amid the pandemic, said Ian Shepherdson of Pantheon Macroeconomics.

Those employees would normally file claims when temporarily laid off in June, and then get off the rolls in July when back at work, but that didn't happen this year. So unadjusted claims didn't rise in early June as much as in previous years, and they didn't fall as much as usual in July.

The latest layoffs may weigh on July's monthly employment figures, as last week included the 12th of the month, making it the reference period for the jobs report due Aug. 7.

'BAND-AID ON A BULLET WOUND'

The phone stopped ringing at Tammy Nelson's auto-body shop in Broomfield, Colo., back in March.

The normally four- to six week wait for customers looking to have dents or bumps fixed on their cars disappeared, leaving the shop silent. Nelson and her husband, Scott, applied in April for a loan from the Paycheck Protection Program -- the federal government's $660 billion aid program meant to help businesses stay afloat and keep paying their workers.

But the loan only delayed the inevitable -- the phone didn't start ringing again, as the pandemic surged around the country. Nelson laid off her five employees at the end of June, including herself and her husband.

The loan program was intended to be a short-term measure, just like the extra unemployment benefits, to help get small businesses through the worst of the pandemic. But the pandemic outlasted it.

"It was just a Band-Aid on a bullet wound," Nelson said of the Paycheck Protection Program. "All it really did was prolong the agony of having our workers file for unemployment. Whether it's April 15 or June 30, the end result is still the same."

Information for this article was contributed by Patricia Cohen of The New York Times; by Christopher Rugaber, Matt Sedensky, Michelle Liu, Lindsay Whitehurst and Rebecca Santana of The Associated Press; by Eli Rosenberg of The Washington Post; and by Katia Dmitrieva, Kristy Scheuble, Edith Moy and Sophie Caronello of Bloomberg News.