University of Arkansas commitment Raheim 'Rocket' Sanders got his nickname very early on during youth football after scoring his first touchdown.

"Right after that they started calling me Rocket because all I did was get the ball and ran towards the outside," Sanders said. "I was good at jet sweeps and no one would was able to catch me."

Even though he showed tremendous promise in football, Sanders didn't see the sport in his future.

He quit playing after the fifth grade to concentrate on basketball after seeing his older brother Bryan have so much success on the hardwood.

Sanders' mother Shantay convinced him to give football another try his sophomore year, but he only played five games at running back before he suffered a meniscus injury in his knee.

He recovered for spring practice and was able to impress college coaches after moving to receiver.

"Only route I knew was fly, I didn't know the plays," said Sanders, who's being recruited as an athlete by Arkansas. "I just told them to feed me the ball."

Despite learning a new position, Sanders was able to reel in his first scholarship offer from North Carolina-Charlotte in the spring and Cincinnati soon followed. New to the recruiting process, he was expecting numerous other schools would offer.

"Patience is the key and I didn't know that," Sanders said.

He received his third offer from Florida Athletic after attending an Owl camp that summer. Then the floodgates opened with 20 other schools, including Arkansas eventually offering.

Sanders, 6-2, 210 pounds, of Rockledge (Fla.) High School, named a top five of Arkansas, Oklahoma, Florida State, Missouri and South Carolina on May 19 before committing to the Hogs on June 8.

He pledged to the Razorbacks without the benefit of a visit to Fayetteville.

"Arkansas, I just feel like that's home right now," Sanders said. "I haven't signed any papers, but I still feel like Arkansas is the move for me."

"They always stay in contact with this virus going on," Sanders said. "They just don't want me, they're going to take care of me and that's a big thing. I know if they're keeping in contact with me 24/7 and not just talking about football, they care."

His brother DJ also plays football and is a promising sophomore at the school. Sanders said his youngest brother Martay, a seventh grader, is also a very good athlete.

One of 17 commitments in the 2021 class, Sanders is excited about the future at Arkansas.

He and the other pledges communicate in a group chat called "2021". Sanders said the group is becoming close, and that bodes well for when they get on campus.

"We're [starting] to feel like a family already," Sanders said.

"The fan base is crazy," he said. "I can say that I knew that right off the bat because there's no NFL team there." 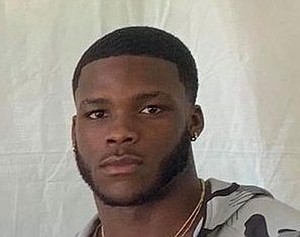