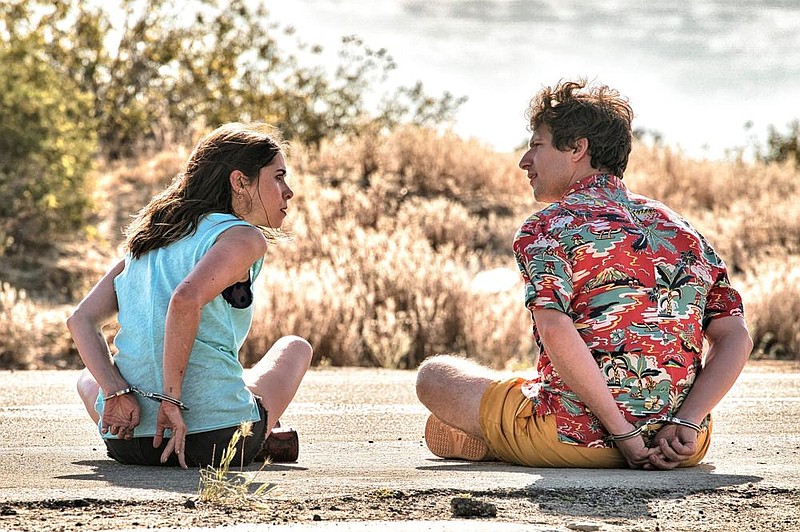 Cristin Milioti and Andy Samberg are locked in a time loop that causes them to continually re-live the same events in “Palm Springs,” which is playing on Hulu and in select theaters.

I only found out about "Palm Springs" because of a Twitter ad that got me curious (you win, advertisements). After watching the trailer and realizing for the billionth time that there are no new movies in theaters, I pulled up Hulu on my Xbox and settled in to watch.

My ultimate impression by the time the credits rolled is "Palm Springs" is a cute little story that provides an updated take on "Groundhog Day" for millennials. That isn't to say only millennials will like the movie. I just feel like this was very much an attempt to provide a tweak on the popular Bill Murray/Andie MacDowell flick.

It's difficult for me to adequately compare the two movies because I haven't seen "Groundhog Day" in years and years. What little I can say about the two is they're both charming in different ways. "Groundhog Day" has a little more sentimentality to it thanks to the down-home charm of MacDowell and Murray. "Palm Springs " is a tad sillier and more exasperated.

The genre tilt also separates both movies. "Groundhog Day" is a romantic comedy with fantasy elements. "Palm Springs" is a romantic comedy with science fiction elements. The main difference between both being the method of keeping characters locked in a time loop. In "Groundhog Day" it seems a phantasmal force has trapped Murray. "Palm Springs" has an actual vortex in a cave responsible for the loop.

It took me a few scenes to get used to seeing Andy Samberg in the lead role playing a character named Nyles because I'm so familiar with him playing a goofy detective on "Brooklyn Nine-Nine."

He's essentially Detective Jake Peralta in this movie, just without being a cop and with a touch more emotional baggage from being trapped in a time loop for an unknown duration. At one point in the movie, Nyles reveals he's been in the loop so long that he doesn't remember what he did for a living before getting trapped inside. He surprised me with the ability to show a bit of melancholiness and serious regret in a few scenes.

Samberg's co-star, Cristin Milioti Sarah ("Wolf of Wall Street," "Fargo"). What I can say about Milioti is she's a talented actress in this movie and makes a cute couple with Samberg. But even on her own, Milioti has such a wide emotional range in the movie, from goofy and outrage to guilt.

But the most surprising face to come across in Palm Springs is J.K. Simmons, who is so boisterous and unexpected in this movie that it is much more enjoyable. He plays Roy.

I loved that this movie doesn't give away the entire hand right away. There were some twists and turns throughout the story that kept me immersed. It seemed every 20 minutes or so, the story would reveal another piece of the overall puzzle, starting a few seconds before a scene I'd watched four or five times already. And the way Simmons, Milioti and Samberg all get different pieces of the movie to their own path is written seamlessly.

Andy Siara wrote the screenplay for "Palm Springs," and once I learned he wrote for the AMC television series "Lodge 49," a few things about this movie made sense. I watched the first season of that series, and if you're familiar with the show before watching "Palm Springs," you'll likely notice pieces of "Lodge 49" throughout the movie.

"Lodge 49" is difficult to describe because the story is very muted and low-key. Each episode is over before you expect and reveals very little about the overall narrative. The humor is subtle and lies in quirky characters and the odd situations they find themselves in. There are moments in "Palm Springs" where you can see bits of quirkiness leftover from "Lodge 49." But again, it's subtle.

It's fascinating how many answers "Palm Springs" gives about why the central characters are trapped in a time loop while simultaneously not answering questions about how the time loop exists.

The movie takes maybe 10 minutes to reveal the vortex inside a cave out in the desert. It lays out the familiar parameters of how the loop works. Every time the characters die or fall asleep, the situation resets back to the familiar morning we're shown 100 times. It all makes sense.

"Palm Springs" also updates a rather dark aspect of these movies. The characters commit suicide to reset the day by running into oncoming traffic or having someone shoot them. Nyles points out the worst way to die is slowly in the ICU. There's no sleeping to reset if the nurses won't let you or you're in too much pain. And there's no easy way to suicide when you're confined to a hospital bed. So all you can do is wait miserably to die so everything can reset.

"Palm Springs" is at its best when it's being silly. The scene I laughed hardest during was when Nyles and Sarah stole an airplane, somehow got it up in the air, and then realized it was running out of fuel. The deadpan way it crashes into the desert with a small explosion had me bust a gut.

The movie clocks in at a refreshing 90 minutes, and I think that's also a strength of "Palm Springs." It presents the story, invests you in the characters, sets up the premise and then concludes. No muss, no fuss. The film is trim and entertaining.

If I had a small complaint with "Palm Springs," it was how it contained an unnecessary number of raunchy scenes. The only sex gag I found to be funny was when they blindfolded a wedding guest and sent him into an occupied bathroom. The rest seemed superfluous.

When I look back at this movie, I see the humor and explicit content have been updated to more closely match a millennial audience in 2020 as opposed to Gen Xers and Boomers who saw "Groundhog Day" in 1993. And that's perfectly fine. There were enough twists and updates on the formula to consider "Palm Springs" a refreshing take.

It was cute and enjoyable, but I probably won't turn it on again. Now "The Old Guard " on the other hand ...