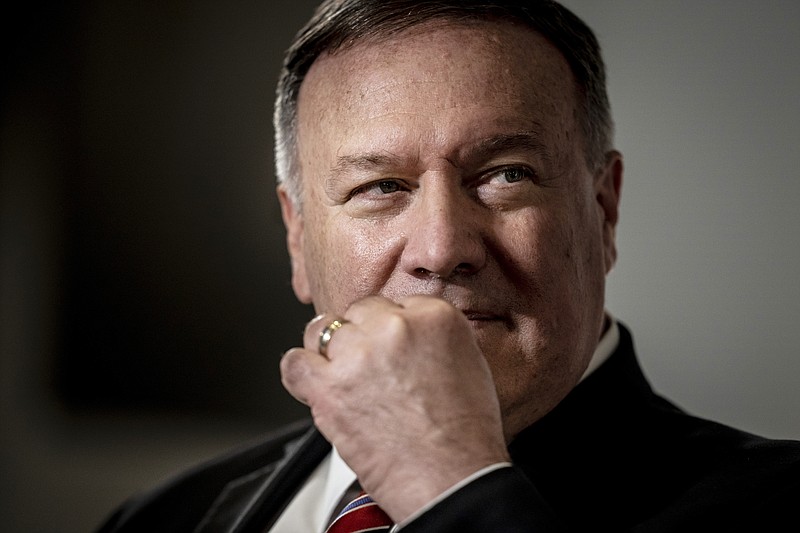 FILE - In this Wednesday July 22, 2020 file photo, US Secretary of State Mike Pompeo attends a press conference in Eigtved's Warehouse, in Copenhagen. Mike Pompeo said Wednesday the Soviet occupation and annexation of the Baltic states of Estonia, Latvia and Lithuania in 1940 was “a criminal act” and draws parallel with present-day Russia’s military maneuvers in Ukraine and Georgia. (Mads Claus Rasmussen/Pool Photo via AP, File)

HELSINKI -- The top U.S. diplomat says the Soviet occupation and annexation of the Baltic states of Estonia, Latvia and Lithuania in 1940 was "a criminal act" and draws parallel with present-day Russia's military maneuvers in Ukraine and Georgia.

Secretary of State Mike Pompeo said in a statement issued Wednesday by the State Department that "just as the United States never recognized the Baltic States' forced incorporation into the Soviet Union, so it will never accept Russia's attack on the sovereignty and territorial integrity of Ukraine and Georgia," which also are former Soviet republics.

The statement and Pompeo's separate video message posted Thursday on the Twitter page of the U.S. Embassy in Tbilisi, Georgia, marked the 80th anniversary of the Welles Declaration, named after its initiator, acting Secretary of State Sumner Welles.

In the declaration, signed on July 23, 1940, the United States condemned the occupation and annexation of Estonia, Latvia and Lithuania by Soviet leader Josef Stalin. Soviet troops had invaded the three small European nations just a week before that date.

Pompeo pointed out that the Welles Declaration is "no mere historical artifact."

"All through the Soviet occupation, the flags of Estonia, Latvia and Lithuania flew at State Department headquarters in Washington, D.C. America still holds true to the principles of sovereignty articulated in the Welles Declaration," Pompeo said in his video message.

The document holds utmost importance to the governments in Tallinn, Riga and Vilnius -- the capitals of Estonia, Latvia and Lithuania -- as the three nations remained occupied for nearly 50 years until independence in 1991 in the collapse of the Soviet Union.

The street where the U.S. Embassy sits in Riga, Latvia, is named after Welles, who was an influential Foreign Service diplomat and major foreign-policy adviser to President Franklin D. Roosevelt.