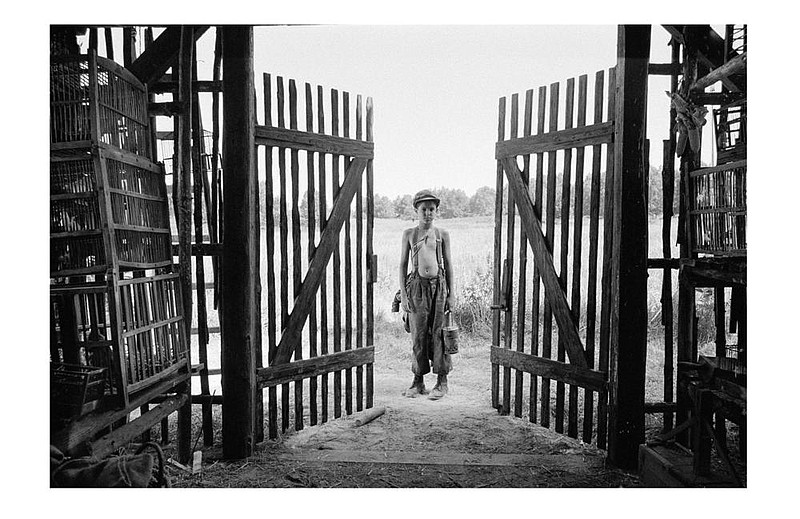 Young Joska (Petr Kotlár) is a witness and subject to all manner of atrocities as he tries to navigate the Eastern European countryside during World War II in “The Painted Bird,” Václav Marhoul’s relentless film adaptation of Jerzy Kosinski’s 1965 novel.

Celebrity tends to destroy the artist -- just look at Orson Welles, Truman Capote or Marlon Brando, who spent their last years prattling away on the couches of Talk Show Nation. Or Jerzy Kosinski, better known for his shame and his suicide than any of the books he ever nearly wrote (among them "Being There," that Hal Ashby turned into a great movie in 1979).

Czech writer-director Václav Marhoul has adopted Kosinski's 1965 novel "The Painted Bird" for the screen, and with the help of cinematographer Vladimir Smutný has made a confoundingly beautiful and searing film of material that, given its provenance, might have seemed irredeemable.

But, thinking it was based on experience, many contemporary critics took it as a relatively accurate reflection of Kosinski's experiences during the war. It was hailed as an instant classic of Holocaust literature, compared with "The Diary of Anne Frank" and Tadeusz Borowski's "This Way for the Gas, Ladies and Gentlemen."

Kosinski did nothing to discourage this interpretation -- he went so far as to assure Elie Wiesel, whose initial impression of the book was not favorable, that it was all true, that it had happened to him.

Given the understanding that "The Painted Bird" was something other than the product of sordid imagination, Wiesel wrote a glowing review for The New York Times Book Review.

Nor did Kosinski divulge the embarrassing facts of its translation: While he wrote the book in his native Polish and rough English, he employed anonymous translators to massage it into final form (a reasonable method for a non-native speaker) yet insisted he wrote every word himself, a con game which subsequently led to his being compared to Joseph Conrad.

Whom he most certainly was not.

But great movies are often made from bad or indifferent books. Divided into nine chapters, this starkly beautiful catalog of horror shot in lustrous black-and-white on 35mm film follows young Joska (Petr Kotlár) who, as in the book, is never directly introduced by name but is known as "the boy."

He has dark hair and eyes and stands out among the fair-skinned peasants he encounters in his odyssey through eastern Europe. He is Other from the beginning, tortured by other children, like the bird of the title, daubed with paint and loosed into the wild, to be attacked by his own kind.

His parents send him to live with his Aunt Marta (Nina Sunevic) to wait out the war, but less than 15 minutes into the movie she dies. When he finds the body, he is startled, knocks over a lamp, and sets the house afire. Given that this is simply an accident, not an act of persecution, we might almost take it as a moment of levity.

Having nowhere to go, the boy wanders. He meets an old woman (Alla Sokolova) who accuses him of being a vampire. She has him buried in the dirt up to his neck; he barely escapes having a raven peck out his eyes. Not everyone is so lucky -- as the plowman who makes the mistake of ogling Udo Kier's wife finds out.

The boy is passed around -- he is sold, subjected to many atrocities, and forced to witness many more. For a while, he's protected by a priest (Harvey Keitel), who inadvertently passes him on to an abusive congregate (Julian Sands), a bootlegger who immediately betrays the priest's trust.

Barry Pepper plays a Russian soldier and Stellan Skarsgård plays a world-weary Nazi who, ironically, is the kindest soul the boy encounters. These famous faces might have, in another production, registered as a kind of stunt casting, almost a form of virtue-signaling by members of the Hollywood elite. But they also serve the purpose of reminding us that all these people, no matter how battered or depraved, have the potential of individual humans.

When the film was shown at the Venice and Toronto film festivals last year, many moviegoers walked out, unnerved by the relentlessness unfolding on screen. Had they never heard of Kosinski's book?

If anything, Marhoul's movie, which plays as allegory more than (false) memory, has, in translating Kosinski's nightmare to the screen, made them slightly more palatable. There is something to be said for dragging the visions out of the black maw of our imaginations and illuminating them in shades of gray on a screen.

That said, "The Painted Bird" is not easy to take and harder to love. But it is a work we ought to respect, an attempt to wrestle with what is evil in the world, and what is evil in ourselves. If it's not completely successful, at least it's serious.

In Czech, German, Russian and Slavic Esperanto, with subtitles.

Available for rental or purchase through various streaming platforms.