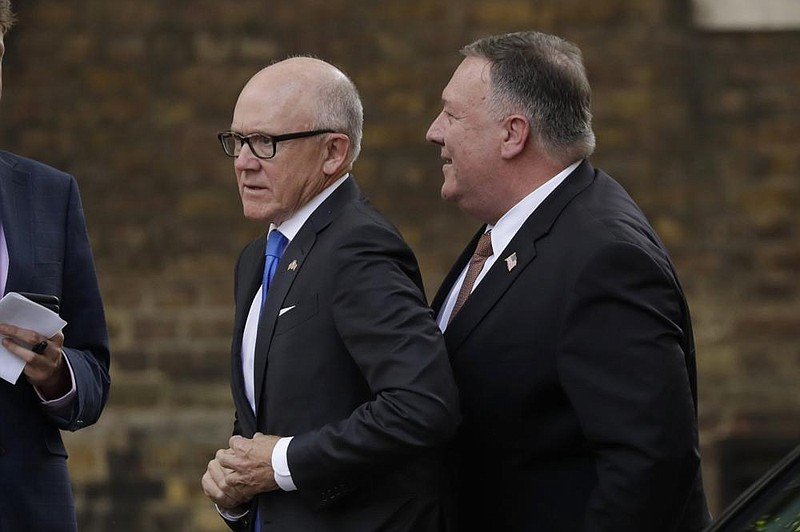 LONDON -- Allegations that America's envoy to Britain made inappropriate remarks about women and minorities, and may have violated federal ethics rules are roiling the U.S. Embassy in London.

Current and former U.S. officials say the charges against U.S. Ambassador to the Court of Saint James's Robert "Woody" Johnson surfaced during a routine inspection of operations at the embassy and are to be addressed in a report by the State Department's inspector general.

Those officials say Johnson is accused of making insensitive remarks that contravene department personnel guidelines. Also, Johnson's former deputy has alleged that the ambassador tried to intervene with British government officials at the president's request to steer the British Open golf tournament to President Donald Trump's Turnberry resort in Scotland.

British officials say Johnson made no requests about sporting events during a meeting he had with the former secretary of state for Scotland David Mundell in early 2018, the time frame in which the subject is alleged to have been raised, and the golf tournament was not awarded to Turnberry.

"No request was made regarding the British Open or any other sporting event," the British government said in a statement, which did not address whether the subject came up at all with Mundell then or in any other conversations Johnson may have had with British officials.

Trump on Wednesday denied that he ever asked Johnson to make the case for Turnberry, on Scotland's west coast, and Johnson has dismissed all allegations of inappropriate behavior, which were first reported by The New York Times and CNN.

But Lewis Lukens, a former two-time U.S. ambassador and retired career foreign service officer who was the No. 2 at the London embassy until Johnson summarily ousted him in January 2019, said he had alerted Johnson and State Department officials in Washington to his concerns about ethics violations over the British Open intervention.

Two current U.S. officials told the AP that they had witnessed or were aware of behavior by Johnson that colleagues had found to be bullying or demeaning.

One former embassy employee said Johnson's questionable behavior and comments toward and about women and minorities were not isolated and were witnessed by numerous staffers on a weekly, if not daily, basis. That former employee and the other officials were not authorized to discuss the ongoing inspector general report and spoke on the condition of anonymity.

The current and former officials said Johnson had questioned the need for events marking Black History Month, which is traditionally commemorated by U.S. diplomatic missions abroad, had hosted embassy events at a private men-only London club against the advice of embassy colleagues and made disparaging remarks about women's appearances.

On Wednesday, Johnson, a Trump campaign contributor and owner of the New York Jets football team, took to Twitter to defend his reputation, saying the allegations that he made insensitive remarks were "false."

"I have followed the ethical rules and requirements of my office at all times," he tweeted. "These false claims of insensitive remarks about race and gender are totally inconsistent with my longstanding record and values."

In a statement provided by the embassy, Johnson added: "It is the honor of a lifetime to serve as U.S. Ambassador to the Court of St. James's and to lead the talented, diverse team of the U.S. Mission to the United Kingdom."

"The staff of Embassy London and our three constituent consulates are the best in diplomacy," he said, "and I greatly value the extraordinary work that each and every member of the team does to strengthen and deepen our vital alliance with the United Kingdom and to advance the shared security and prosperity of our two nations."