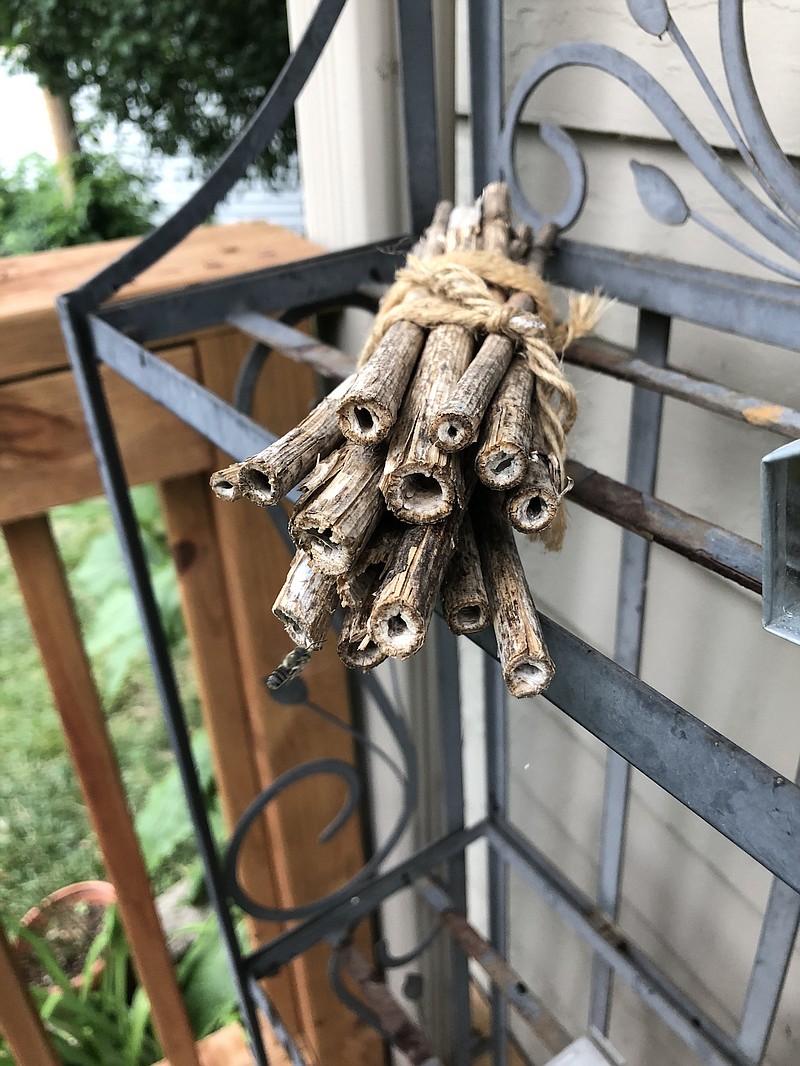 Gardening is most rewarding when you take the time to look. That gnat on the chervil flower may be a tiny wasp that is obligingly pollinating the bloom.

I find these small, harmless wild bees and wasps enormously entertaining as they flit about and feed on nectar and pollen. I can't distinguish all the species, but I know they are valuable and of no bother to me. Moreover, I draw great satisfaction in feeling that I have helped create an environment where these winged wonders can thrive.

Other gardeners go further, and they put out nesting tubes for bees — bee houses or bee nesting boxes or bee hotels, call them what you will — and they are an effective way to draw certain bee species to your domain.

There are pitfalls and there is disagreement, too, as to how they should be managed, but on balance, bee houses offer a great way to invite this hidden universe into your landscape. At the very least, putting a bee house in your garden offers a constructive and educational distraction from pandemic blues, especially in households with young children.

The bee house ranges from something as simple as a few hollow reeds bundled together to elaborate framed structures that you can buy. And yes — unlike slotted butterfly houses (remember those?) — they actually work.

Everyone is familiar with honeybees, an Old World bee long established in North America, but the bees that are drawn to bee houses are principally species of mason and leafcutter bees.

There are approximately 3,600 species of wild bee in the United States.

The most conspicuous type of these, the beleaguered bumblebee, doesn't inhabit bee houses but nests together in the ground, old mouse nests and even tussocks of grass.

For the most part, wild bees "are small, they're dark and they're in the background," says Jennifer Hopwood, a conservation specialist with the Xerces Society. "But they're still out there, and it's important to support them when we can."

Most wild bees nest in such terrestrial places, but about a quarter of them inhabit tunnels in decaying wood, fallen logs or in hollowed-out stems, making them potential tenants for the bee house, says David Mizejewski, a naturalist with the National Wildlife Federation and author of "Attracting Birds, Butterflies and Other Backyard Wildlife."

These bees are solitary. They don't live in hives or nests, though they will gather in bundled tubes, one to a tunnel, to shelter and raise their young.

Whether you make your own bee house or buy a ready-made one, Mizejewski and Holly Walker, plant health specialist at Smithsonian Gardens, offer these tips for success: The tubes should be removable for good bee house sanitation; fungal diseases can build up and sicken the bees.

And if you want to go above and beyond, you can collect the tubes in the fall, dismantle them carefully to examine the hibernating cocoons and discard the pupae that have disease or parasites. The keepers are then stored in a cold, sheltered spot — not indoors — over the winter so they can emerge in the spring. Other experts say you don't have to go to such bother to be a successful native bee guardian and that replacing tubes every year or two is sufficient.

Harvesting and cleaning bamboo is laborious, says Sam Droege, a biologist at the Patuxent Wildlife Research Center in Maryland, but reeds and grasses are easier to collect. As sturdy, hollow-stemmed grasses, miscanthus, pampas grass and the weedy reed named phragmites are well-suited to the task. Tie off the stems, cut them to the desired length (a saw is good for this) and bundle them. "You can make them into sculpture," Droege says. Sounds like a great summer project to do with the kids.

Hopwood says one common tenant is a wasp that lines its tunnel with blades of grass that stick out of the end conspicuously.

Other considerations: The tubes should be at least six inches long to allow for a sufficient brood chamber and should be secure so they don't blow around in the wind. Place them below an overhang to keep them dry but not too close to the ground to minimize predation. Position them to face the morning sun, so the bees can warm up early in the day and get about their work.

What shouldn't you do? Some experts advise against assembling bee houses that are too large because the concentration of bees will invite disease, parasites and predators. Don't use plastic straws, because they won't wick moisture away from the nests, says Samuel Ramsey, an entomologist who lives in Washington. He had as many as 10 clusters of tubes in his suburban home — he recently moved — and attracted mason bees, leafcutter bees and yellow-faced bees. "There's quite a diversity of native bees," he says. "They tend to be overlooked."

Insect hotels incorporate bee tubes but offer materials and habitats for a wider range of desirable invertebrates. This breadth of function may make managing the bee tubes more difficult, and, in my experience, these mega structures don't age well without repair and maintenance.

Walker is not gung-ho on the old practice of simply drilling holes into blocks of wood because of the difficulty of keeping them free of bee diseases and pests.

But others are more relaxed about this. Droege says grab a portable drill and bits between 1/16 inch and 1/2 inch and go about the garden making holes. Avoid pressure-treated wood, live trees and Uncle Harry's rowboat. "People tend to get very rigid about what these bees require, but it's very straightforward," he says. "Drill holes, give them a lot of options."

For spring-nesting mason bees, the best time to put up a bee house is in late winter, but other bee species will use the tubes throughout the growing season, so there is no bad time to install one. It may take a while for the bees to find it, but they will arrive. "Absolutely," Ramsey says. "Every single year."

An organization formed to help pollinators, Pollinator Partnership, gives a plan for a homemade bee hotel on its website, pollinator.org.

These insects pose little or no threat to people. Even the ones with effective stingers don't have the nest-defending aggression of social species such as honeybees or yellowjackets, experts say.

Ultimately, the bee houses may be more for our benefit than the bees', because these creatures are around anyway. Droege says an acre of land can support an estimated 25,000 individual bees annually.

Bee houses are a small part of what you can do. The best way to harbor wild bees is to garden with them in mind, which is to say avoid using pesticides, plant lots of herbaceous perennials and grasses, and let fallen branches lay to give these insects the sort of natural habitat they used long before bee houses were dreamed up.

Don't be too tidy. In her garden in Omaha, Hopwood cuts back her perennials and grasses in winter at six to eight inches above the ground. This leaves old, hollow stems standing that the bees will use during the spring. Ironweed, Joe Pye weed and the aptly named bee balm are all good perennials for this use, she says. The new spring growth of the perennials will soon hide the old stalks.

Some ecological gardeners will leave top growth after it fades in October, but Droege says this is of little value to wild bees unless the stems have been damaged or cut, so they can gain access. "I tell people, cut everything off at a foot in the fall, and then you have got a whole source of open stems for bees to choose next year," he says.

Many bee species rely on specific native plants for their pollen needs, so the gardener should consider planting those for them. These would include native willows and dogwoods and plants within the daisy family, such as asters, rudbeckias and goldenrods.

By welcoming all wild bees, we get a practical benefit: They are good at pollinating garden plants, so we get fruit and vegetables and seeds and berries.

But placing a bee house by the kitchen window and observing these creatures, even when one species preys on another, simply adds to our understanding of nature. "There's just no downside to opening up our world," Hopwood says.

Outdoor containers must drain to prevent soggy soil and root rot. Do not set them on saucers. A pot is fully watered when water drains from the bottom, and watering is easier if there is an inch between the soil and the lip of the container.