IN THE GARDEN: What are these beautiful plants? 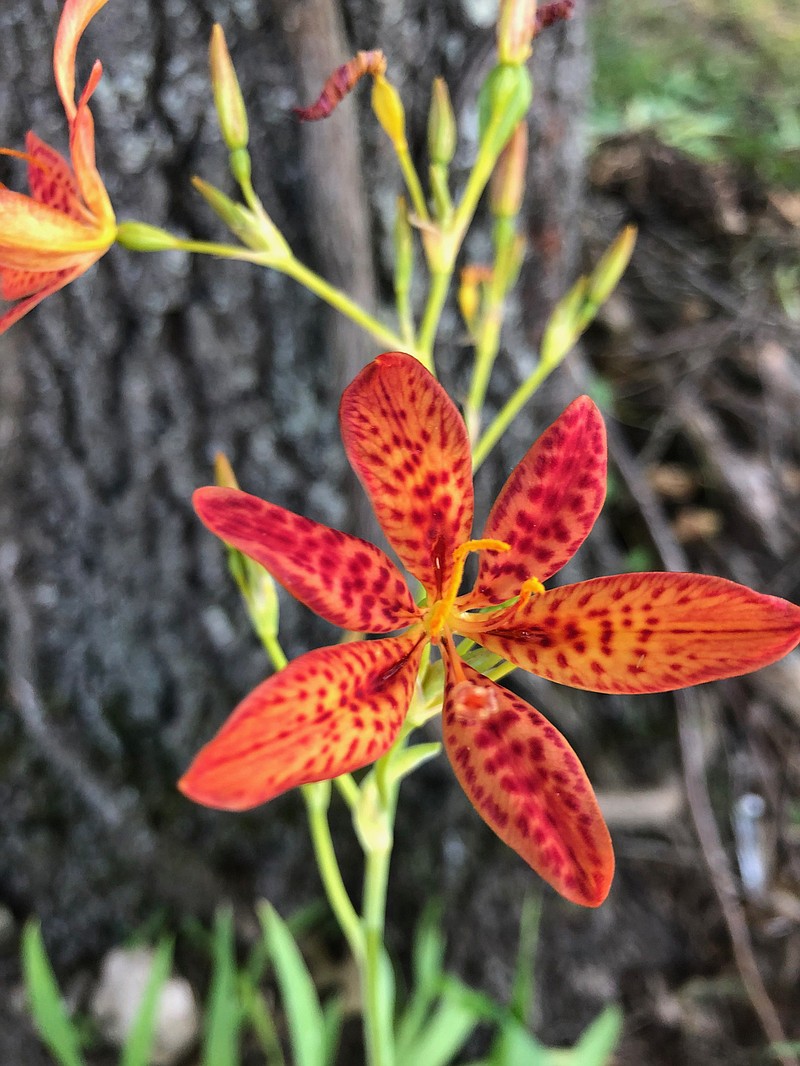 Belamcanda or blackberry lily is a member of the iris family. (Special to the Democrat-Gazette)

Q These beautiful plants have leaves that resemble iris or gladiolus. Blooming now on a newly cleared lot in Boone County. What are they?

A The common name is blackberry lily because the resulting seed pods look like a mature blackberry. Belamcanda is the Latin name for this member of the iris family. This spotted orange flower is one of the most common forms, but they can also come in yellow and pink, some with spots and some clear. They do well in full sun to partial shade and are quite drought tolerant. The foliage will usually die back to the ground in the winter. 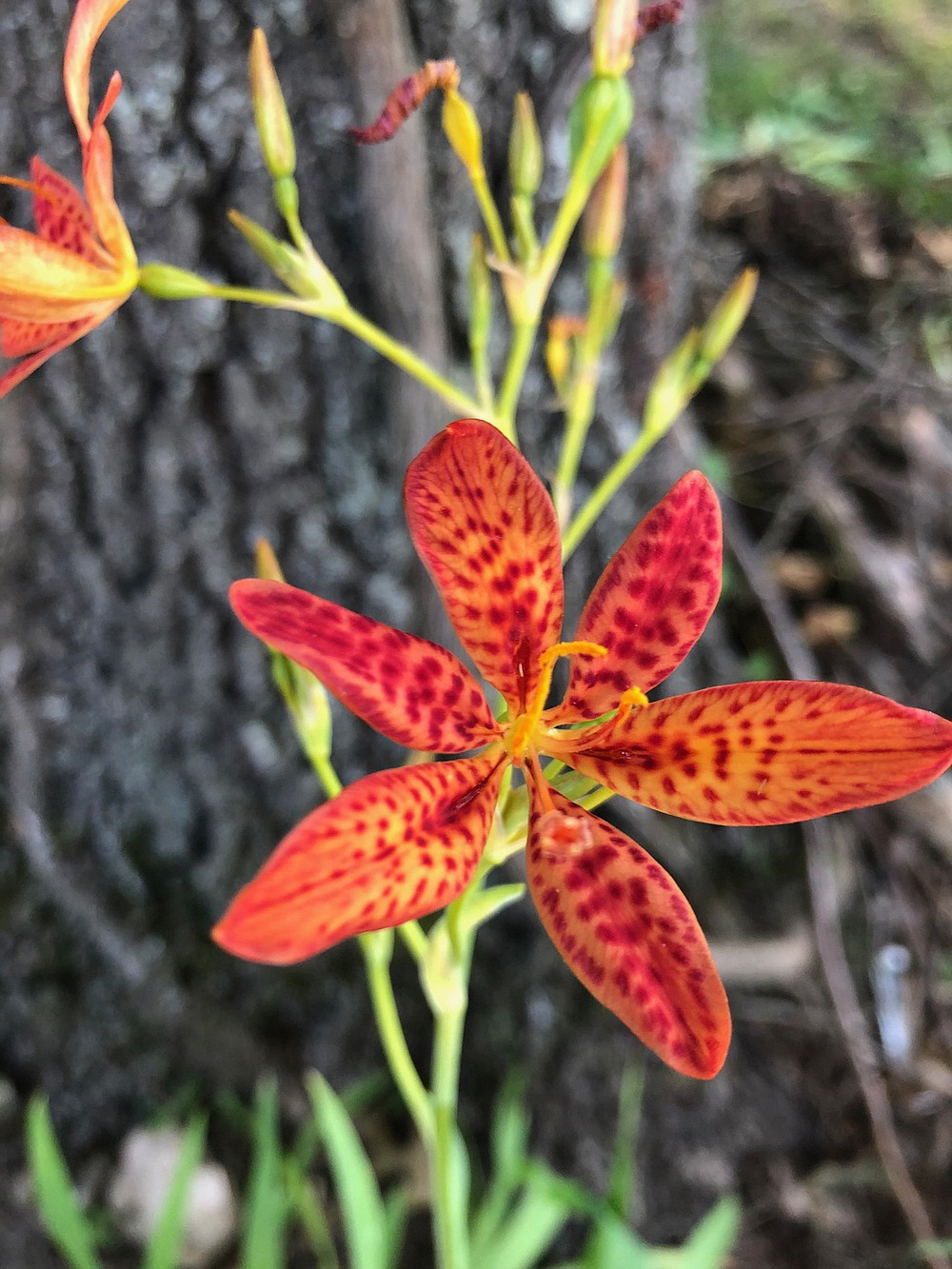 Belamcanda or blackberry lily is a member of the iris family. (Special to the Democrat-Gazette)

Q Can you identify these invasive weeds? They started in our flower garden and I have no idea how to get rid of them. We live in north Central Arkansas.

A The weed in question is mulberry weed (Fatoua villosa), and it is the bane of many a gardener. The leaves look like mulberry tree seedlings when they are small, and it is in the mulberry family. Luckily, the weed is a summer annual so it doesn't come back from the root system, as would a perennial, but the bad news is that it produces seeds at a very young age and a lot of them. The flowers and seeds are born up and down the stems at a leaf node. If left unchecked, the plant can grow almost 4 feet tall in one season. The seeds can be discharged up to four feet or more away from the plant and remain viable for several years. This weed, along with chambers bitters, is suspected of being a "traveler" with nursery stock or mulch. It started getting a foothold in the 1990s. Getting to the weeds when they are small to prevent blooming and seed set can help. Mulches also help a little.

Q When the newspaper was printed on newsprint, we used it to create a weed barrier in the garden. We are now using cardboard as you are suggesting, and it works well. I have a lot of old manila file folders. Could they be used for this purpose?

A Manila folders will probably be a bit slower to break down than newsprint or cardboard but should work fine. You want to avoid glossy paper products. Did you know that the original manila folders were made from manila paper — which originally came from Manila hemp?

Q I have two apple trees, one is an Apple Wolf River and the other is a Rome. They are 6 years old and they have never produced fruit. I bought a Red Diamond two years ago because I was told that the original two would not pollinate each other and I needed one that would. How old are apple trees when they finally produce fruit? I had quite a few blooms this year on the Wolf River but only one on the Rome. I fertilize and prune in the spring. What am I doing wrong? Thanks.

A Apples do need two varieties that bloom at the same time to pollinate each other. Whether the apple trees are standards or dwarfs and how old they were when you got them will determine when they begin to bear. Six to 10 years is the average age they begin to bear fruit. I bought my son an espaliered apple tree that had six different varieties grafted to make one tree, and it flowers and bears fruit each year — just not a whole lot of it. 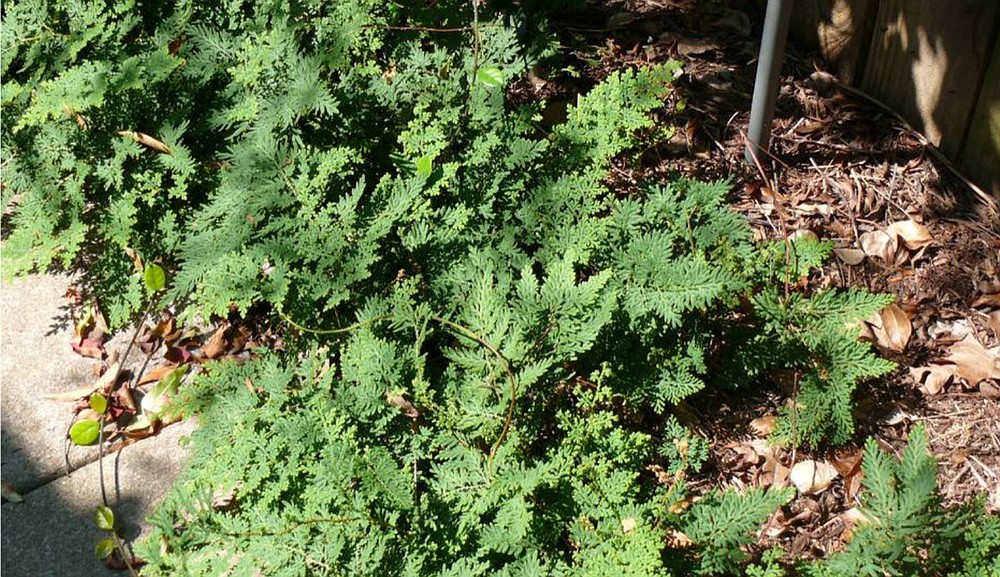 Selaginella or Arborvitae fern is not a fern but a club moss. (Special to the Democrat-Gazette)

Q This is a perennial that I bought at a plant nursery. It comes back every year. Can you tell me what it is? I also have this perennial fern that I would like to know the name of. Thanks.

A The white flowering perennial is candytuft or Iberis. It is a lovely, low-growing spring bloomer. After it blooms, give it a light haircut to keep it from getting woody. That can also encourage a second crop of flowers. The "fern" is not a true fern but a club moss called Selaginella or, commonly, Arborvitae fern. 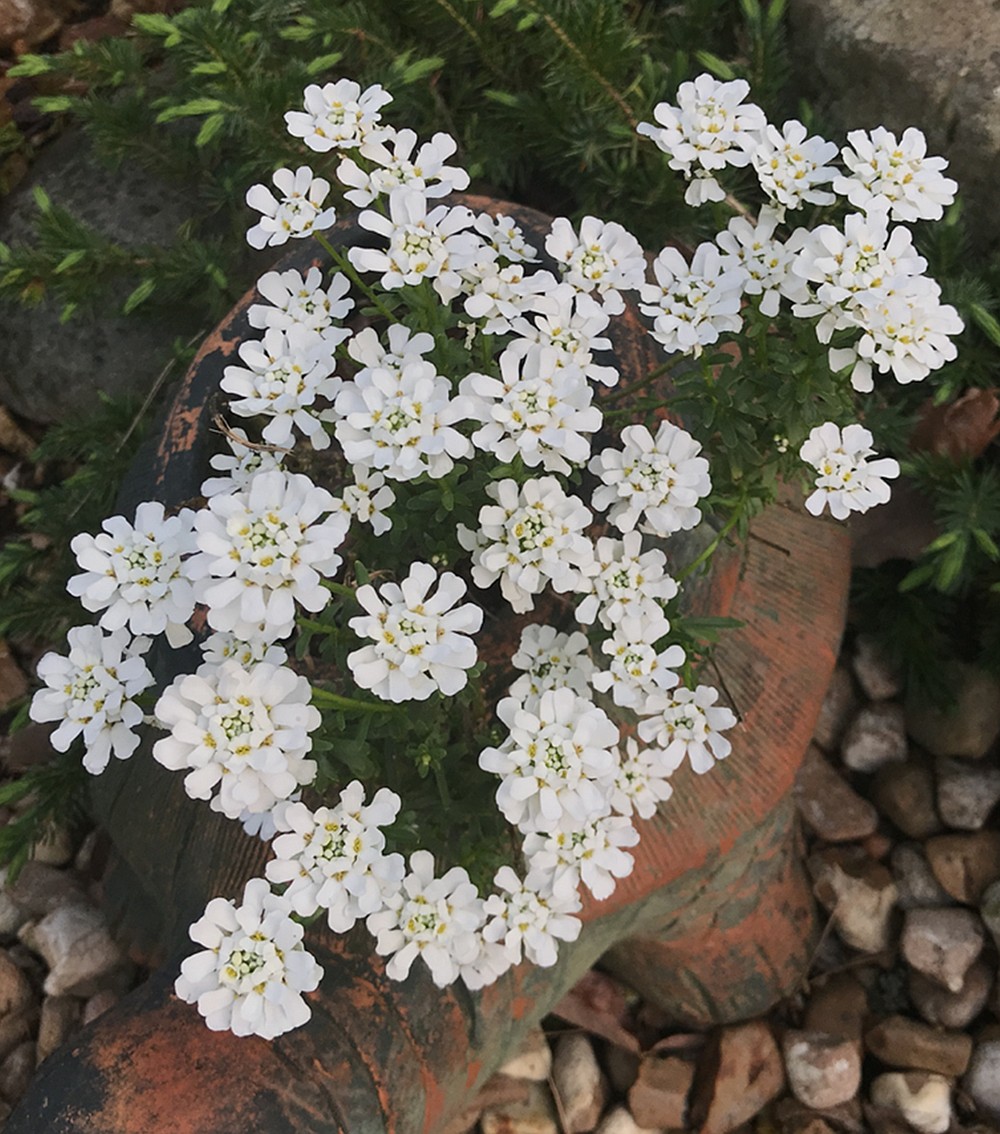 Candytuft is a spring-blooming perennial. (Special to the Democrat-Gazette)