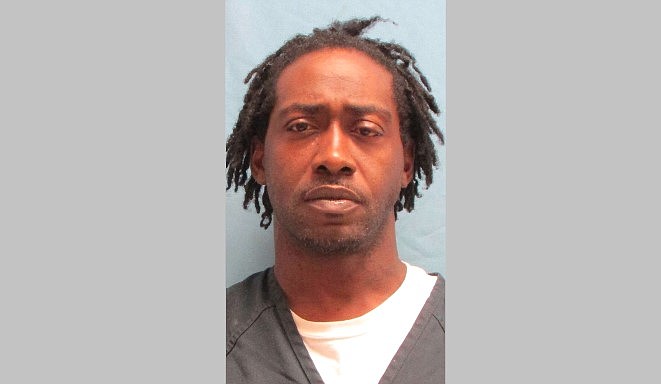 The instigator of a 2017 shootout inside the now-defunct Power Ultra Lounge nightclub that injured 28 people and focused national attention on Little Rock's gang wars appeared in federal court Friday to be sentenced on marijuana-distribution and gun charges.

But questions about Machita Decosta Mitchell Jr.'s background, including his role in the shootout, his convictions for shooting at two people in a car in Texas, and a pending capital-murder charge in Pulaski County Circuit Court kept the sentencing from being completed until arguments from prosecutors and the defense can be examined more closely.

Assistant U.S. Attorney Stephanie Mazzanti says Mitchell, 44, who is known as "Frog," should be sentenced to 27 years in federal prison, where parole is unavailable, because his criminal record qualifies him as a "career offender" and his penchant for crime and violence "has gone virtually uninterrupted," even while jailed for three years now.

A career offender, who is subject to a steep sentence, is someone who is convicted of a felony offense that is considered violent or involves a controlled substance offense, and who has at least two convictions of the same type. In Mitchell's case, Mazzanti and defense attorney Jordan Tinsley disagree on whether Mitchell's convictions constitute "crimes of violence" under federal sentencing guidelines.

On Oct. 16, Mitchell pleaded guilty before U.S. District Judge Kristine Baker to charges of conspiring to possess marijuana with intent to distribute and aiding and abetting the possession of a firearm in the course of drug trafficking. In return, another marijuana-distribution charge and gun charge were dismissed.

The charges, for which Kenwan "Booman" Sherrod, 22, is still facing trial, stemmed from probation and parole officers' visit to Mitchell's house June 13, 2017, where Sherrod was visiting. The officers discovered guns and trash-bag quantities of marijuana, and obtained a search warrant that led to the finding of digital scales, ledgers, $23,750 in cash and more marijuana, which prosecutors say was evidence of a large-scale drug operation.

Mitchell identified the marijuana and some of the guns as his, while visitors at the house, including Sherrod, claimed ownership of other guns.

The state Crime Laboratory tested 16,644.2 grams (37 pounds) of marijuana found at the house, but didn't test an additional 26,114 grams (58 pounds) of suspected marijuana, according to court documents.

Mazzanti said that while Mitchell was in jail, he communicated with others about obtaining additional "kilogram quantities" of marijuana to distribute.

Mitchell's Texas charges date to Aug. 30, 1995, when records show he pursued a vehicle leaving a high school, firing up to 12 rounds at the vehicle with two men inside. He was convicted in 1996 of knowingly firing a gun at or in the direction of two people, which Mazzanti says constitutes a conviction for "deadly conduct," but Tinsley contends that doesn't meet the definition and notes that federal probation officers agree with him.

Mazzanti argues that even if Mitchell's Texas convictions don't count as violent felonies and he isn't deemed a career offender, he "should be sentenced to a substantial sentence given his lengthy criminal background and the danger he poses to public safety."

She argued that "throughout his lengthy criminal history, [he] has demonstrated that he is a threat to public safety, and his previous sentences of imprisonment have had little to no effect in deterring him."

In Pulaski County Circuit Court, Mitchell was charged in 2018 alongside three other men-- Tyler Jackson, 20; Sherrod; and Kenterrioun Deshon Chandler, 21 -- with aggravated robbery and capital murder in the July 24, 2017, shooting death of 14-year-old Cincere Alexander. The boy was shot at the Green Mountain Drive apartment where he lived with his father, Chris Alexander, who was a longtime friend of Mitchell's, a fellow Crip gang member. The two men had recently had a falling out, and authorities say Mitchell suspected Alexander of stealing a large quantity of marijuana from him.

Alexander, 43, was sentenced a year ago in federal court to 10 years in prison for selling large quantities of marijuana, which he said he did to support a youth outreach program he founded to steer teenagers away from the gang life.

In the murder case, Jackson and Chandler pleaded guilty in Pulaski County Circuit Court to charges of aggravated robbery and first-degree murder, and were sentenced in 2019 to sentences of 20 years, and 30 years, respectively.

Still awaiting trial are Mitchell, who was jailed in the marijuana case at the time, and Sherrod.

Mazzanti said Friday that recorded jail calls show Mitchell and Sherrod discussing a plan less than two hours before the shooting to have Jackson go to the apartment to conduct a robbery. She said that shows Mitchell was involved even though he was jailed during the killing.

She presented testimony Friday from a Little Rock homicide detective, Terry McDaniel, to bolster her argument. But Tinsley questioned the detective in an effort to show that Mitchell was merely reacting during the call to Sherrod's idea, and that in a second conversation the next day, when Sherrod revealed that the boy was dead, Mitchell expressed surprise, saying, "Man," and, "Hell no."

"Yes sir," McDaniel replied. "He didn't have any knowledge of it."

Baker cautioned attorneys about getting into too many details of the state murder case, noting that the case isn't yet resolved. However, Tinsley said federal prosecutors are "seeking a massive upward variance based on that case," and he believes it is necessary to examine details of the murder case to show a "lack of culpability" on Mitchell's part.

Mazzanti also has cited other incidents in Mitchell's history, starting when he was 20 years old, in an effort to show that he deserves an extended sentence.

She cited misdemeanor assault convictions in Texas for hitting women, one in 1993 and one in 1994; a 1995 arrest in Little Rock for carrying a weapon; and a 1997 assault conviction for kicking a man. She also cited a 2015 marijuana-distribution arrest alongside Chris Alexander to which Mitchell pleaded guilty.

She presented testimony from an officer who is a member of the Get Rock Task Force, formed after the Power Ultra Lounge shooting, about accusations that in 2016 Mitchell threatened to kill a woman and her friend, whose uncle Mitchell suspected had stolen money and marijuana from him. The detective said a Pulaski County sheriff's detective had listened to Mitchell's telephone calls from jail with his father, Sherrod and one of the victims, Tyrone Nutt, in which they discussed paying a $250 bribe to Nutt to arrange for charges against Mitchell to be dropped. The case is still pending.

Jackson has admitted being the person who fired the first shot inside the Power Ultra Lounge early July 1, 2017, saying Mitchell gave him a 9mm gun and encouraged him to use it against rival gang members inside the club, in retaliation for the recent slaying of Jackson's brother.

The officer said that according to Jackson, Mitchell said, "You need to shoot him."

"That remark was more or less the spark that set off the Power Ultra Lounge shooting," the officer testified.

On cross-examination by Tinsley, the officer confirmed that Mitchell has never been charged with shooting a gun inside the nightclub.

Mazzanti said that in 2007, Mitchell was involved in a brawl at a concert at Juanita's, a restaurant and nightclub downtown, that sprawled into the street and resulted in the death of a bystander. She said Mitchell was convicted in that case of being a felon in possession of a firearm and served a five-year sentence, "but this did not dissuade him from further violent conduct."

Criminal conduct, even if not charged or if it resulted in an acquittal, can be used in federal cases as justification for increasing a sentence.

"Mitchell's violent and menacing behavior persists, and he is not just a participant in gang-related violence and drugs, he is a leader in it," Mazzanti wrote.

Tinsley, however, argues that the court "should recognize Mr. Mitchell's relative youth at the time of many of his prior convictions, including the ones which involve allegations of violence." He said Mitchell's "lack of youthful guidance" provides another reason for a lower sentence.

He noted that Mitchell's parents didn't supervise him as a child, and that he often took care of his younger brother, who died in his arms after being stabbed. He also noted that Mitchell "has several young children,"and that a 10-year sentence would allow him to return more quickly to his role as a caregiver for them.

The sentence the government seeks, Tinsley argued, is far greater than necessary to punish him and deter others.

Baker said she will leave the record open in case attorneys on either side want to submit more legal arguments, and she may issue a sentence based on the record, or she may hold a second hearing before imposing a sentence.