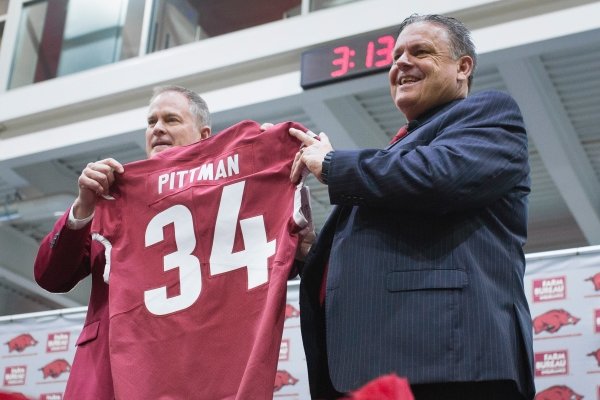 FAYETTEVILLE -- University of Arkansas first-year football Coach Sam Pittman will operate under a non-compete clause with SEC schools based on language in his finalized contract, but he'll also have the opportunity to boost his salary by as much as 25% based on the victory totals of the Razorbacks in the coming years.

The Arkansas Democrat-Gazette received a copy of Pittman's 32-page contract Friday through a public records request. The contract, worth at least $3 million per year for five years, was completed Monday with the signatures of UA Chancellor Joseph Steinmetz and UA System President Donald Bobbitt. Pittman and UA Athletic Director Hunter Yurachek signed the contract July 15.

Pittman, 58, had been working under the terms of the offer letter he signed after accepting the position Dec. 8.

Pittman, a first-year major college head coach, has the lowest salary in the SEC by a fairly wide margin. Vanderbilt's Derek Mason had a salary of just over $3.36 million in 2019, according to the USA Today data base of head coach salaries.

Other new SEC hires are Mississippi State's Mike Leach at $5 million, Missouri's Eli Drinkwitz at $4 million and Ole Miss' Lane Kiffin at $3.9 million, according to reports.

Pittman has stair-step incentives that would increase his salary by $250,000 with six victories, $500,000 with seven victories and $750,000 with eight or more victories in any year of the contract.

An interesting twist in the contract is Pittman's acceptance of a non-compete clause with other SEC schools. At the time of his departure from the Bret Bielema staff to Georgia after the 2015 season, Pittman was one of only a couple UA assistant coaches without that specific clause.

"He had absolutely no issue with [the] clause," Yurachek said Friday in an email. "I can remember him saying something to the effect that this was his dream job and last job, he had no intention of looking for employment anywhere else."

The non-compete clause was not included in the contract of Pittman's predecessor, Chad Morris, who Yurachek fired last November after posting a 4-18 overall record and 0-14 record in SEC games. Yurachek said that contract was negotiated by former interim UA Athletic Director Julie Cromer Peoples, but his preference is for head coaches to be barred from taking other jobs within the SEC.

Yurachek said considerations have been made for UA softball Coach Courtney Deifel (with Kentucky) and women's golf Coach Shauna Taylor (with Georgia). Taylor played college golf at Georgia, and Deifel -- a former assistant coach at Louisville -- has family in Kentucky.

Pittman's no-compete clause would be waived if he is fired by Arkansas, but would extend through the end of his contracted date if he left the program on his own.

"Arkansas is where I want to be and this is the job that I want, so there was no hesitation in a no-compete clause," Pittman said in a statement to the Arkansas Democrat-Gazette on Friday. "The only program I'm concerned about is the Arkansas Razorbacks and making our team and student-athletes as successful as possible. I think the contract reflects that. I'm so thankful Hunter and the university believe in me and our staff."

None of Pittman's current assistant coaches -- five of whom were coaches at SEC schools in 2019 -- have non-compete clauses in their current deals.

Pittman is the third Arkansas head football coach since Houston Nutt left after the 2007 season for Ole Miss to have a non-compete clause with other SEC schools.

Yurachek's aim to have buyout language protecting the university in the case of poor performance is in the contract as promised.

The school would owe Pittman no further payment if he was fired for cause, as former Arkansas coach Bobby Petrino was on April 10, 2012.

If Pittman were to leave Arkansas to take another job before Dec. 2, 2021, he would owe the UA $6 million. That buyout figure would drop to $3 million through December 2022, and to $1.5 million through the term of the deal.

The UA is the guarantor for any buyout payments on the Pittman deal, not the Razorback Foundation, the athletic department's fundraising arm. The UA was also the guarantor for Morris' contract and is responsible for severance payments of up to $10.1 million owed to Morris through 2023.

Recent issues that have cropped up in Bielema's lawsuit against the Razorback Foundation, the guarantor to his contract, have seemingly shaped some of the language in Pittman's deal.

Under the "offset" portion of the section on the UA firing Pittman for convenience, the contract reads: "Coach's duty of mitigation includes the obligation to maximize Coach's earning potential with a new employer until he turns sixty-five (65) years of age" or until the contract runs out. Additionally, the contract reads, "Moreover, Coach or any individual or entity acting on Coach's behalf shall not structure compensation or any compensation with a new employer below market value for the position or in any manner to avoid or deny UA's right.of offset of the Release Payment."

At the heart of the lawsuit Bielema filed last month against the Razorback Foundation for more than $7 million is his job activity in 2018.

The foundation, which had made more than $4 million in severance payments to Bielema, stopped making monthly payments to him after January 2019, claiming breach of contract for what it felt was not a good-faith effort by Bielema to obtain a job commensurate with his status. Bielema consulted with the New England Patriots prior to the 2018 NFL Draft and was paid $25,000, then he accepted a position as a special assistant to Coach Bill Belichick for $100,000. Based on the terms of his release agreement, the first $150,000 Bielema made in 2018 was not subject to mitigation.

The wording in Pittman's contract is more precise regarding contract disputes, saying they must be settled in the Arkansas court system.

Bielema's attorneys filed their lawsuit in federal court in the U.S. Western District of Arkansas, citing ambiguous language in his release agreement that specifies only "Washington County, Arkansas" as the proper venue to settle disputes. The Bielema lawsuit is now pending a ruling on the foundation's motion to dismiss based on improper venue. 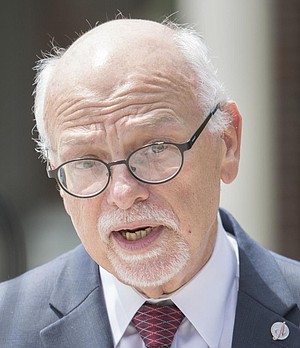